What people will do to save money ...

With the pandemic hitting hard on so many families' wallets, some households are finding interesting ways to cut costs. In particular, one family has taken up an unusual offer to save some money on their internet bill. With days full of Zoom meetings and remote learning, we don't blame them. The catch? It cost them their firstborn's name.

A Swiss internet provider named Twifi has a bizarre yet attractive promotion going on right now. The offer is simple. Any expectant parent who names their child Twifius or Twifia will get to enjoy free internet service until their little bundle of joy turns 18.

The rules for the promotion are simple. Snap a picture of an official birth certificate with your child's name on it, indicating that your child's name is indeed the company's name and you're eligible for the offer!

While the running ad is both bizarre yet financially appealing, one family has decided it's a bargain too good to ignore. The couple, who have chosen to remain anonymous, have allegedly taken the company up on its offer by naming their little girl Twifia. 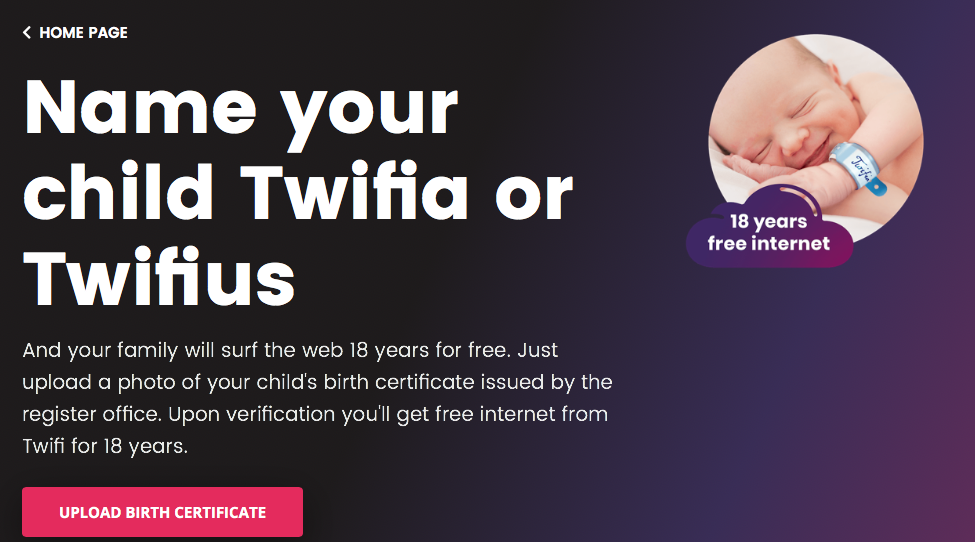 While the couple wishes to remain anonymous for personal reasons, the parents did speak with kidspot.com.au. Dad shared:

"The longer I thought about it, the more unique the name became for me, and that was when the thing got its charm."

While mom wasn’t too keen on the idea, she added the following:

"It's his child too. And for me, the name Twifia also stands for connection in this context. For an eternal bond!"

The couple plans to save the money they would have paid for internet service in a savings account for when their little one grows up.

The founder of Twifia, Philippe Fotsch, shared that he would commit to honoring the ad even if the company were to no longer exist.

After the strange year that 2020 has certainly been, it's worth noting that unlike other bizarre events that have transpired this year, saving a few thousand dollars on your internet bill in exchange for your child's name doesn't sound all that crazy.

Would you take on this attractive deal? Let us know what you think in the comments below!