Virginia just became the ninth state to launch an esports program for all state high schools.

This summer, the Virginia High School League executive committee announced a one-year pilot program for esports (short for electronic sports) in all Virginia high schools launching during the 2019-20 school year.

This means students can sign up for esports teams, go to esports practice, train with coaches, and compete with other schools on school-sanctioned teams. Esports players will compete against teams not only across the Commonwealth but across the nation. Thanks to the digital nature of the sport, location is not a restriction.

Yes, you heard that right.

“Since approved by the Executive Committee, there has been a lot of positive feedback from schools and sponsors who are very excited about esports.”

During its pilot year, the Virginia high school esports program will include competitions in the following games:

Schools will be allowed to enter multiple teams of players for each game title. Each school will register directly to compete and pay $64 per student, per game title, per season. 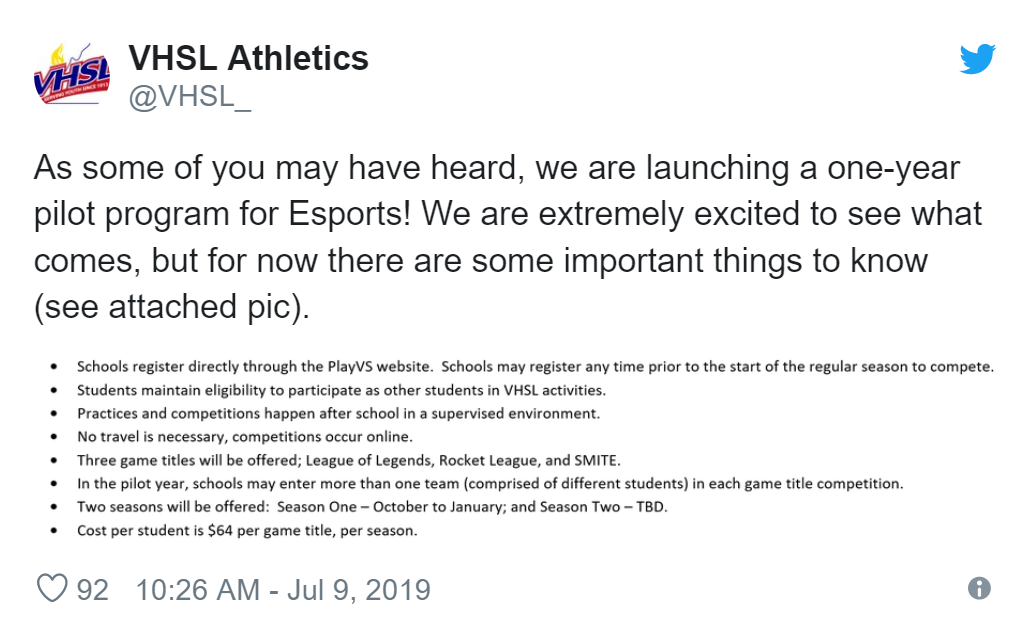 VHSL will require esports practice sessions to take place after school in a supervised environment.

“Through this pilot program and with the assistance of PlayVS, the esports platform provider, the Virginia High School League will assess the potential participation of member schools in esports, and provide data to the Executive Committee for potential sanctioning of esports as an official activity for the league,” VHSL said in a statement.

PlayVS is the esports platform sanctioned by the National Federation of State High School Associations.

Although at first "esports" sounds like a synonym for "video games," a PlayVS guide written for parents specifically differentiates the two, saying esports are "not to be confused with video games” due to set rules and guidelines to which esports players must adhere.

Why esports? What are kids learning by playing League of Legends or SMITE? Arlington assistant principal Miles Carey told The Washington Post:

“They’re learning cooperation and time management. They learn about not gaming too much. Just like a football player isn’t going to spend seven hours practicing, they can’t spend seven hours gaming. And being on a team means being able to take defeat and not blame each other.

Gamers don’t walk around with a big flag, so it’s not easy to find others.”

Other state school systems, including colleges and universities, are also embracing esports programs. According to an editorial in the Roanoke Times, more than one-third of children enrolled in nationwide esports programs were not involved in other school activities. Esports can arguably serve as a healthy outlet for these children to socialize, learn team-building skills, develop self-confidence, and be part of a group celebrating shared achievements – exactly like other sports teams.

“I look at esports as a vehicle for engaging kids,” one California school administrator told the website EdTech. “It’s really been a way for us to reach a different population.”

On Twitter, VHSL Athletics encouraged parents to review this general overview of esports here or to view additional materials for parents or schools on this website.

What do you think of high school esports programs? Let us know your thoughts!