The dust is visible and already affecting air quality in the Caribbean.

On June 13, the NASA-NOAA’s Suomi NPP satellite showed that a dust cloud from the Sahara had spread over 2,000 miles into the Atlantic Ocean and close to the Lesser Antilles.

Atmospheric scientist Colin Seftor made an animation comprised of the dust and aerosols from the plume to show just how far the cloud was going.

“The animation runs from June 13 to 18 and shows a massive Saharan dust cloud that formed from strong atmospheric updrafts that was then picked up by the prevailing westward winds and is now being blown across the Atlantic and, eventually over North and South America,” Seftor said. “The dust is being detected by the aerosol index measurements from the Suomi-NPP Suomi NPP satellite’s Ozone Mapping and Profiler Suite (OMPS) data overlaid over visible imagery from the Visible Infrared Imaging Radiometer Suite (VIIRS).” 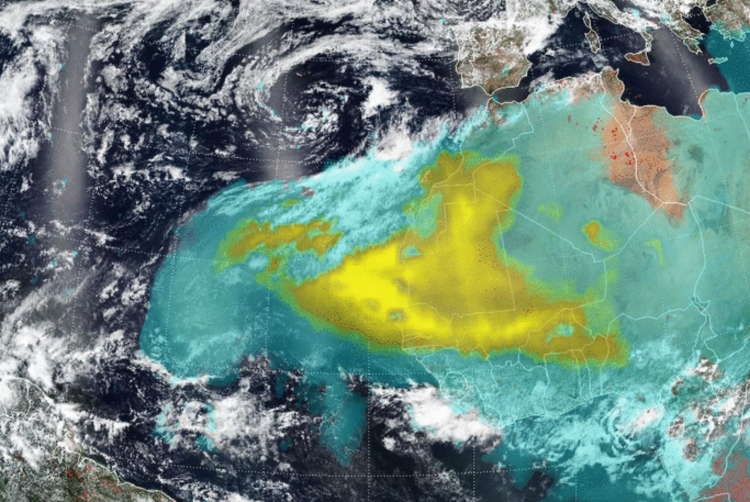 On Sunday, people took to social media to post photos of the conditions as the cloud moved in, as well as satellite imaging:

Ok, last dust pic for today and this one is perhaps the most incredible yet. The comparison photos were sent to me from Mirco Ferro who lives in St. Barthelemy. Check the dates in the photos (top is from March) - both are unfiltered or altered in any way. #SAL #DUST pic.twitter.com/FBwOG5ly1E

Here's our very impressive layer of Saharan Dust moving westward across the Atlantic and into the Caribbean. It extends from Hispaniola to Africa this morning! #Saharan#SaharanAirLayer #SAL pic.twitter.com/y2aXUXFZMw

For years now, NASA has studied the role of African dust layers coming across the Atlantic, since millions of these particles are picked up and carried over the ocean with trade winds, in a cloud that can reach up to 20,000 feet above the earth. It's common for the dust cloud to begin to break apart and become less potent as it moves into the Caribbean. This one, however, seems to be remaining intact.

Though the dust can affect air quality in North and South America and be troublesome for breathing, there is a silver lining. Scientists have surmised that the dust contributes to beaches in the Caribbean and even helps fertilize Amazon dirt and soils. In addition, dust clouds like this one serve to deter tropical storm formation and hurricane activity, due to the air being extremely dry and dusty.

Barbados Meteorological Services has already issued a "Severe Dust Haze Warning," warning of reduced visibility and concerns for people with asthma and other respiratory problems.

As of right now, the dust cloud is expected to stay farther south than the continental U.S., until later in the week when it moves from the Gulf into Texas and across the Southeast. By then, the thought is that the cloud will have diffused somewhat, only causing general haziness and some beautiful sunrises and sunsets.

What do you think? Have you ever experienced the effects of a Saharan dust cloud before? Tell us in the comments!