You can track its progress with NASA's Asteroid Watch Widget.

NASA is reportedly tracking an asteroid that's making its way towards Earth within the next few days, and get this—it's the size of a football stadium. But don't fret! The space agency has a handy tool for monitoring its every move called the Asteroid Watch Widget, and now you can see its progress for yourself!

The widget monitors various factors including the object's size and diameter, the date of its impending approach, and its distance from Earth, along with pictures to represent the object's relative size. According to the widget, there are currently five approaches expected in the next couple of days, and the stats are compiled into a neat little chart. Starting June 3, an asteroid 97 feet in diameter will be approaching Earth at a 1,830,000 miles distance, followed by a 100-foot object the next day at 3,850,000 miles. Both are airplane-sized.

On June 5, a house-sized object of 52 feet will be under 3 million miles away. Then on June 6, we get the mother load with asteroid 2002 NN4. It's the size of a stadium at a staggering 1,100 feet and will approach Earth from 3,160,000 miles. To put this in perspective, only 239,000 miles exist between the moon and Earth, which renders these objects far, far away. Pretty cool, huh? 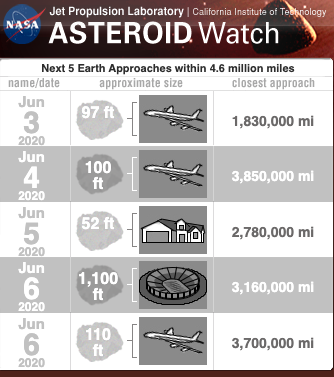 While these numbers sound terrifying, scientists have confirmed they show no threat towards the planet. We repeat: there is no threat.

According to NASA's website, the Widget tracks any object larger than 150 meters (492.12 feet) that can reach Earth within an average radius of 4.6 million miles, but it's still not close enough to be of concern.

What do you think of this news from NASA? Will you be utilizing the Asteroid Watch Widget to track its progress? Share your thoughts in the comments!