Courtesy of the Egyptian Ministry of Antiquities
D. DeGroot 10/16/19
Join the Community
shares

Archaeologists working in the Egyptian city of Luxor uncovered a cache of more than 20 incredibly well-preserved ancient sarcophagi.

In the modern age of technology, social media, and the 24-hour news cycle, it seems like there aren't really any surprises anymore. So, when something is discovered from the ancient world—especially something that is so well preserved—it opens a door to history, giving us a glimpse of what came before. Egypt is well-known for holding treasures of the past, and this week a huge discovery of more than 20 well-preserved coffins was just announced by the Egyptian Ministry of Antiquities.

The sarcophagi were unearthed in a tomb in the necropolis of Al-Assasif, located on the west bank of the Nile. Once part of the long-ruined city of Thebes, the area is not new to historical finds. This most recent discovery is "one of the largest and most important discoveries that have been announced during the last few years", according to the official press release.

More details on which period the 20 coffins date from have not been released by officials yet. But previous findings in the area date back to around 1539 B.C. Another archaeological discovery was made just last week. Announced by the Ministry of Antiquities, an "industrial area" had been discovered in Luxor’s West Valley and included storage buildings, furniture, and pottery dating back to Egypt’s 18th Dynasty. 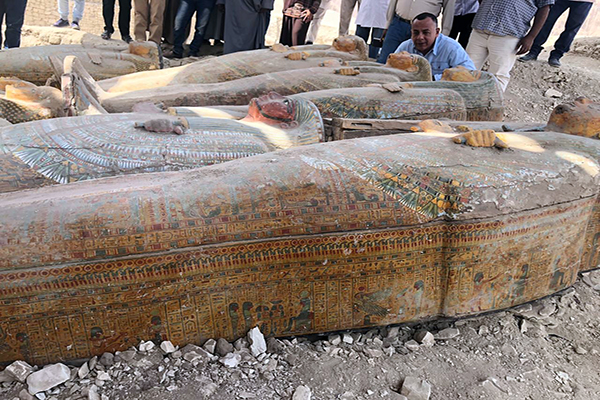 Courtesy of the Egyptian Ministry of Antiquities

The coffins are made of wood and were found "as the ancient Egyptians left them", according to the official statement. The sarcophagi are completely intact, and brightly painted, appearing to be sealed as they were when they went into the ground. When they were discovered, the coffins were stacked in two layers, on top of the other.

A press conference has been scheduled for Saturday where more details on this incredible find will be released.

This is very exciting news and we will be tuning in to see what information is shared over the next few days. What do you think? Does learning from humankind’s ancient history get you excited? What other discoveries do you think will be made? Let us know in the comments.