A 23-year-old engineering student from India captured the incredible images while on a safari trip.

Abhishek Pangis, 23, was visiting the Tadoba Andhari Tiger Reserve in the Maharashtra state of India with his parents. On the second day of their visit, the budding photographer had a chance encounter with an exceedingly rare black leopard that will stay with him for a lifetime.

The animal stayed nearby for about 40 minutes, giving Pangis enough time to snap some amazing, once-in-a-lifetime pictures.

This was his first safari adventure, and it's safe to say that it was far more thrilling than expected! The dramatic face-to-face interaction with the rare animal initially took Pangis by surprise and he says he just went blank, before snapping out of it and taking the photos.

Pangis told LadBible that the animal was looking for a place to cool down from the intense summer heat—temperatures at the reserve can reach upwards of 120 degrees Fahrenheit. The leopard made its way to a nearby pond for some water, and Pangis, who just happened to be the only one in the group with a camera, started capturing images. 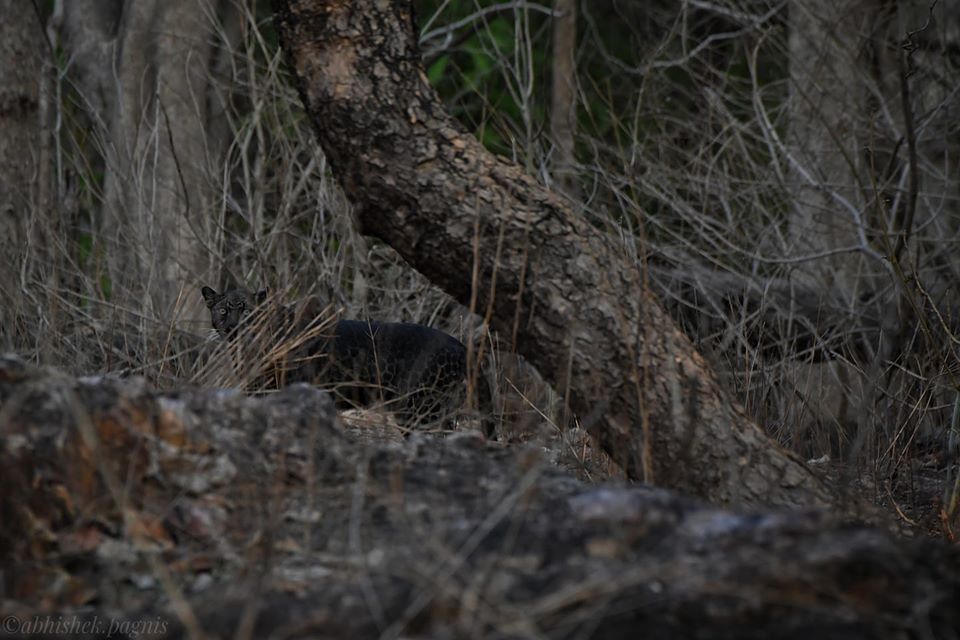 Describing the experience, he says this:

“I hadn't seen anything so beautiful; I was completely stunned. Usually, people have seen it around for two or three minutes, but I was very lucky as I could see it for 40 minutes. I witnessed it drinking water from a pond, marking its territory and stalking langurs and monkeys. It was a brilliant experience.”

Black leopards are a rare variation of the usually spot-coated animal. They are referred to as a melanistic animal; the black color comes from a condition called melanism, a condition where excess melanin is produced leading to the darker color of the big cat’s coat. These rare cats have an air of mysticism about them and have a level of protection, and it's believed, in some cultures, that they're good luck.

Though they are hard to make out, the melanistic cats still have spots and are no different than other leopards, with the exception of their color. They tend to stay in densely forested or shaded habitats, and the dark color of their coats allows them to blend in better in darker areas.

Thanks to Pangis for sharing these amazing pictures with the world.