The first picture of Mars taken by the Hope Probe, part of the mission that will be studying Mars, gives us a rare glimpse into the red planet's landscape, and it's impressive.

The picture, developed by the University of Colorado Boulder Laboratory for Atmospheric and Space Physics (LASP), shows the largest volcano in our solar system, Olympus Mons. This image is just part of Hope's overall mission to give researchers a chance to study the atmosphere and loss of gasses in the space of a Martian year.

"Olympus Mons is one of a dozen large volcanoes, many of which are 10 to a 100 times taller than their terrestrial counterparts. The tallest of them all towers 16 miles (25 kilometers) above the surrounding plains and stretches across 374 miles (624 km)—roughly the size of the state of Arizona," says Space.com. "In comparison, Hawaii's Mauna Loa, the tallest volcano on Earth, rises 6.3 miles (10 km) above the seafloor (but its peak is only 2.6 miles above sea level). The volume contained by Olympus Mons is about a hundred times that of Mauna Loa, and the Hawaiian island chain that houses the Earthly volcano could fit inside its Martian counterpart." 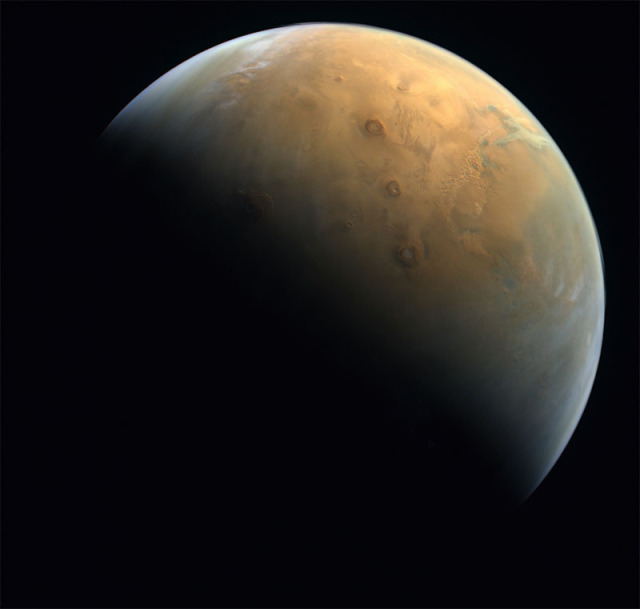 The UAE Hope Probe was developed by LASP and Mohammed Bin Rashid Space Centre. This marks the first time an Arab country has reached Mars with one of its own spacecraft. It launched on July 19, 2020, and reached Mars on February 9, 2021. The picture of the planet was released by LASP on February 15.

Hope will be orbiting the planet during its time in space, and it is already ahead of the game by even getting there. About half of the flights to the red planet have failed.

"The Hope spacecraft carries three instruments that will allow scientists to study the weather near the surface of Mars, the connections between different layers of the atmosphere, and how Mars loses atmosphere to space. Scientists leading the mission hope that this data will help them understand, for example, how dust storms at the surface of Mars affect atmospheric loss and how weather systems around the globe relate to each other," said Space.com.

While it is orbiting the planet, the Perseverance Rover, which landed safely on Mars on February 18, will be researching the surface.

What fascinates you about space and Mars? Let us know in the comments.