In 2018, we all watched with broken hearts as a mother orca carried her dead newborn for 17 days as she grieved the loss of her calf. Now, that orca (most often called "killer whale") is pregnant again, researchers announced Monday.

Named Tahlequah (or J35), the killer whale is just one of several whales that's pregnant in the Southern Resident killer whale population, according to researchers at SR3, a group that's devoted to the response, rehab, and research of sealife.

"Since early July, SR3’s Dr. Holly Fearnbach and Dr. John Durban from Southall Environmental Associates (SEA) have been able to collect aerial images of the majority of the endangered Southern Resident killer whale population," says SR3 on its website. "This ongoing project is using photographs from drones to non-invasively measure growth and body condition to track the nutritional health of the population over time. Quantitative measurements will be generated for all individuals encountered, but obvious shape changes in some individuals have revealed a number of pregnant whales ... from all three pods." 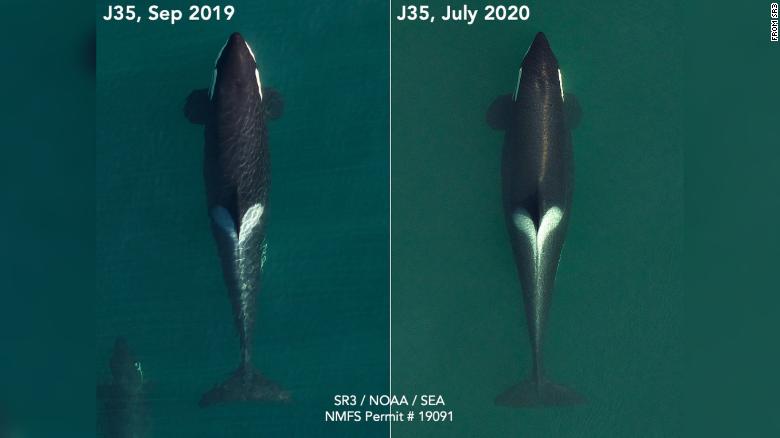 The killer whale population is often seen near the Salish Seas, which is near British Columbia and Washington State. Researchers say that the current population is 72.

The gestation period for killer whales is anywhere from 17-18 months.

Scientists say that the calf that Tahlequah carried two years ago would have been the first for the whales in three years. Since then, though, two more calves were born and both survived.

To learn more about Tahlequah and the other mother orcas, visit the SR3 website.