Though it seems hard to believe there's a bright spot among all the bad news lately, scientists have recently reported that daily carbon emissions have dropped by 17 percent worldwide. In fact, it's possibly the largest drop in recorded history. The current levels of average daily emissions are at a level we have not seen since 2006.

In a recent study, a team of international scientists looked at the altered energy demands during the extended shutdowns—the first analysis to measure the change in carbon dioxide during the pandemic. The results show remarkable drops in carbon dioxide emissions compared to 2019, described in the study as "extreme and probably unseen before." Researchers looked at 69 countries that are responsible for about 97 percent of the world’s total carbon dioxide emissions for the study.

Looking at data gathered from January 2020 through April 2020, it's shown that at the peak of the COVID-19 shutdowns in early April, the world cut daily carbon dioxide emissions by 17 percent. The drop lasted for about two weeks in early April, in large part due to the vastly restricted activity that kept many cars and vehicles off the roads for several weeks. 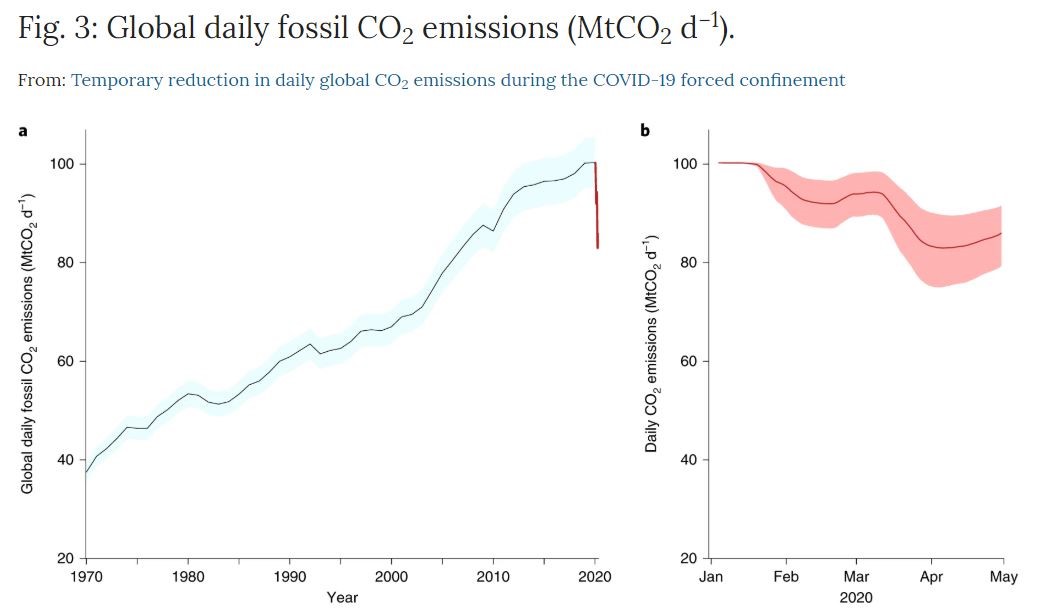 Overall, the reduction in daily carbon emissions over the last few months will account for a four to seven percent lower emission rate than in 2019, making it the largest annual drop in carbon emissions since World War II. While this is remarkable news, carbon dioxide emission rates are already rising again, and the change was merely a “drop in the bucket”. As normal activity resumes, these temporary changes are not likely to have a long-term effect.

According to the study, "most changes observed in 2020 are likely to be temporary as they do not reflect structural changes in the economic, transport or energy systems.”

“Globally, we haven’t seen a drop this big ever, and at the yearly level, you would have to go back to World War II to see such a big drop in emissions. But this is not the way to tackle climate change, it’s not going to happen by forcing behavior changes on people. We need to tackle it by helping people move to more sustainable ways of living.” Professor Corinne Le Quéré, who studies climate change science at the University of East Anglia in the U.K. is the study’s lead author.

All over the world, people have been noticing the clarity and clearness of very blue skies, and cities have seen the normal smog fog that hangs over them clear up. Though it's not permanent, it gives us an idea of what could be and shows that when the human population purposefully acts together the result can be astonishing.

#London, you can see so far on days like these. Such clear air. pic.twitter.com/pSpVxeVSKj

Able to see Devon, 30 miles away, from 330m above our house yesterday. #cleanair pic.twitter.com/x8B34L9ADr

Have you noticed the difference in the air over the last few weeks? Have you seen changes as people start to venture out more, and spend more time driving and using carbon dioxide emitting fuels again? Share with us what you think about all this in the comments.

VIDEO: This Bad Lip Reading of the Presidential Debate Says Everything