Prince Philip's Funeral: Everything We Know About the Service

Prince Philip's Funeral: Everything We Know About the Service

The Duke of Edinburgh died on April 9 at the age of 99.

Buckingham Palace announced the death of Prince Philip, The Duke of Edinburgh, on April 9. He was 99.

"It is with deep sorrow that Her Majesty The Queen has announced the death of her beloved husband, His Royal Highness The Prince Philip, Duke of Edinburgh," writes the statement. "His Royal Highness passed away peacefully this morning at Windsor Castle. The Royal Family join with people around the world in mourning his loss."

Preparations for Prince Philip's funeral are underway, and here's everything we know thus far.

When Is Prince Philip's Funeral?

Prince Philip's funeral will take place on Saturday, April 17, at 3 p.m. (BST), at St. George's Chapel at Windsor Castle. The service will begin with a minute of silence and preceded by a Ceremonial Procession within the grounds of Windsor Castle.

According to the Palace, the Duke of Edinburgh's coffin is "covered with His Royal Highness’s Personal Standard and dressed with a wreath of flowers, is resting in the Private Chapel at Windsor Castle, where it will remain until the day of the funeral."

On the day of the funeral, the coffin will be moved to a Bearer Party. "Positioned in the Quadrangle at Windsor Castle there will be representative detachments drawn from His Royal Highness’s military special relationships," says the Palace.

Much like the procession for Princess Diana, "Prince Charles, Prince William and Prince Harry will walk behind Prince Philip's coffin in what is going to be a very moving final farewell to the duke," said royal expert Katie Nicholl in an interview with Entertainment Tonight.

Union Flags flying at half-mast at royal residences will remain until the day after the funeral.

View the processional route below: 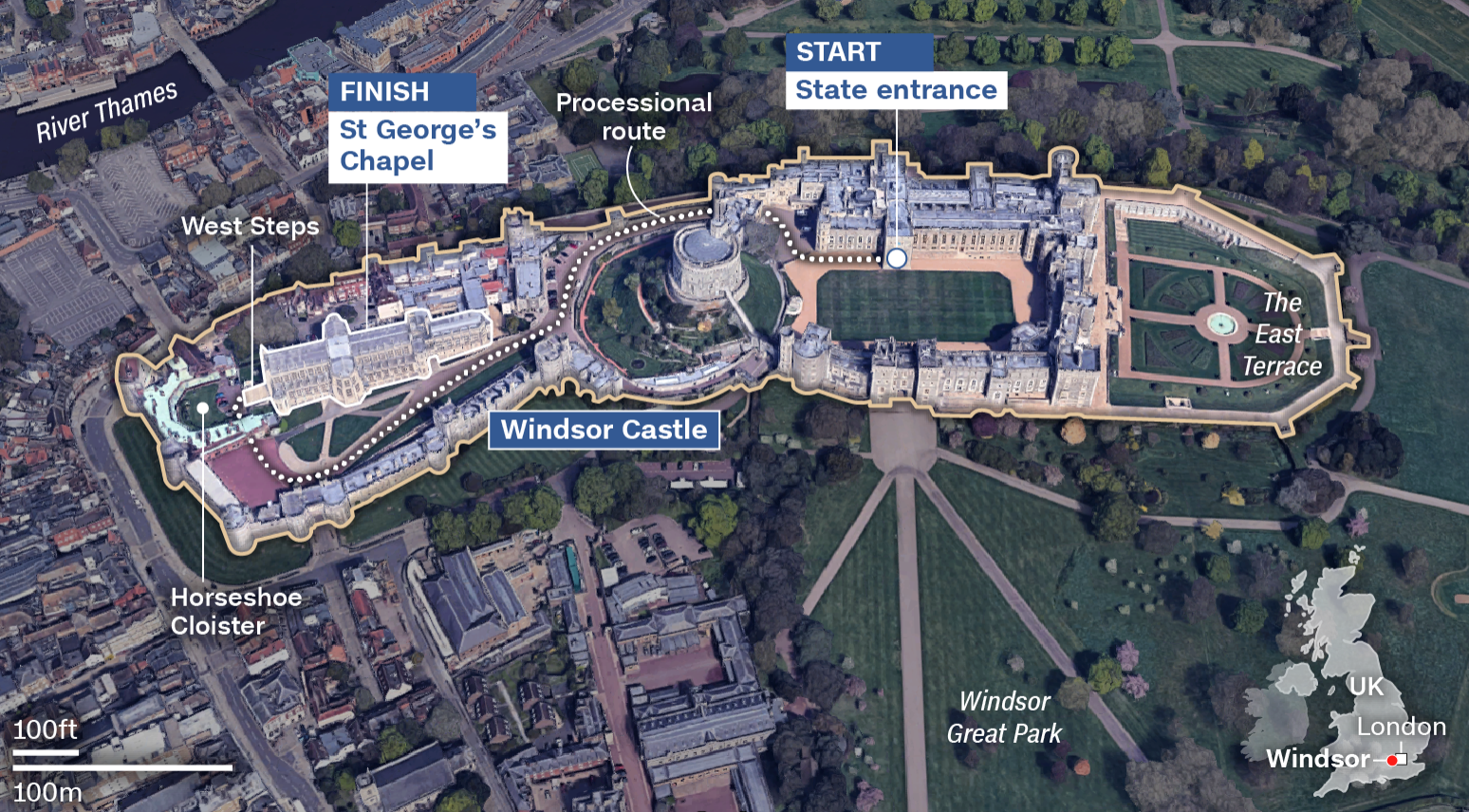 How Do I Watch the Service?

Even though the general public will be unable to attend in person, BBC One will be broadcasting the service live online and on television.

Who Will Be in Attendance?

The service will be a small affair, with only 30 people in attendance, per the Duke's wishes (read more on that below).

Queen Elizabeth II and other members of the royal family, including Prince Charles and wife Camila, Duchess of Cornwall; Prince William and Kate Middleton, Duchess of Cambridge; and Prince Harry, Princess Anne, Prince Edward, and Prince Andrew. Meghan Markle will not be in attendance, reports say, as she is pregnant with her second child and she didn't receive medical clearance to travel from her physician.

The general public will not have access, but journalists and photographers will be able to attend. Arrangements had to be made due to the pandemic and safety restrictions.

“In line with Government guidelines and public health measures, there will be no public processions and the Duke’s funeral will take place entirely within the grounds of Windsor Castle," says a Palace spokesperson.

Below is the entire guest list, courtesy of Buckingham Palace:

What Were Prince Philip's Final Wishes?

Prior to his death, Prince Philip had a simple request for his funeral—to keep have it be "a simple affair." As the queen's consort, Prince Philip is entitled to a state funeral, says Omid Scobie, co-author of Finding Freedom: Harry and Meghan and the Making of a Modern Royal Family.

"[The funeral] would be a day of mourning for the country but would involve heads of state from around the world being invited to congregate at Westminster Abbey to remember his life," Scobie explains. "It is something that we last saw with Princess Diana's funeral, the whole world stood still for that moment. With Prince Philip, he has asked for a much more quieter event. He has asked, in his words, a simple affair and that is exactly what is happening at the ceremonial service that will take place at St. George's Chapel at Windsor Castle."

Prince William and Prince Harry each shared heartfelt tributes to their grandfather:

A post shared by Duke and Duchess of Cambridge (@kensingtonroyal)

Prince Harry, who is currently in the U.K. at Frogmore Cottage ahead of Saturday’s funeral, has written a tribute to grandfather Prince Philip on behalf of him and his family: pic.twitter.com/9jYEMyf7ur

Share your thoughts and condolences in the comments below.