Scientists Discover a Hell-Like Planet the Size of Earth

Scientists Discover a Hell-Like Planet the Size of Earth

It rains rocks, has oceans of lava, and gets as hot as, well, hell.

A research team from McGill University, York University, and the Indian Institute of Science Education have published information about a planet that's basically described as hell.

K2-141b, as the planet is called, is a “hell planet” where the seas are made up of fiery lava and two-thirds of the planet is in continuous sunlight. It's an Earth-sized rocky exoplanet that orbits very close to its star. Due to the very close proximity, the planet is locked in place, with the same side of the planet always facing the star. Temperatures reach a balmy 3,000C (over 5,400 degrees Fahrenheit), hot enough to vaporize rocks.

The other side of the planet hits a cool -200C (-328 degrees Fahrenheit) and is immersed in an endless night. The atmosphere is very thin due to the minerals in the rock vapor. Winds on K2014b reach over 5,000 kilometers an hour (3,000 miles per hour) and the oceans of hot molten magma are estimated to be about 100 kilometers deep. 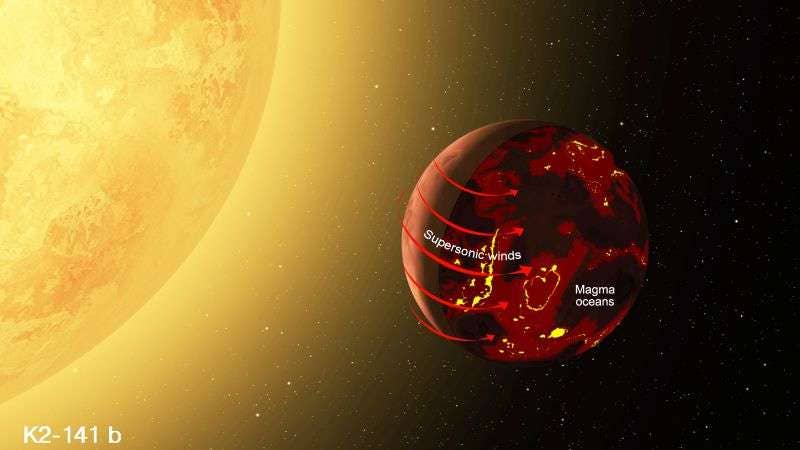 The rock vapor in the atmosphere undergoes a process similar to the water cycle here on Earth, only it's full of vaporized minerals, so it essentially rains rocks. Scientists believe that the unstableness of the planet’s weather will eventually change the surface and atmosphere of K2-14b.

“The study is the first to make predictions about weather conditions on K2-141b that can be detected from hundreds of light-years away with next-generation telescopes such as the James Webb Space Telescope,” says the study lead author Giang Nguyen, a Ph.D. student at York University.

The study gives researchers insight into planetary evolution, and they plan to continue to study it.

“All rocky planets, including Earth, started off as molten worlds but then rapidly cooled and solidified. Lava planets give us a rare glimpse at this stage of planetary evolution,” says Professor Cowan of the Department of Earth and Planetary Sciences at McGill University.

They published their findings in the Monthly Notices of the Royal Astronomical Society on November 3, 2020.

What do you think about this hell-like planet recently discovered? Share your thoughts in the comments below.