"It bends and even breaks a lot of rules."

A new species of ancient mammal has been discovered, and it has some outright weird features.

The newly discovered mammal is 66 million years old and was found in Madagascar, according to scientists. In a study published online on April 29 in the journal Nature, researchers detailed it as the most complete skeleton of a mammal from the Mesozoic era that lived on the ancient continent of Gondwanaland. Researchers describe the creature as having many "unique" features and it is labeled as an "unprecedentedly bizarre mammal from the Age of Dinosaurs".

The fossil was discovered in what is now Madagascar, once part of the supercontinent called Gondwanaland and was discovered in 1999 by Dr. David Krouse, the senior curator of vertebrate paleontology at the Denver Museum of Nature & Science and professor emeritus at Stony Brook University, where part of the research was performed. Krause and his team have worked for 20 years to identify the animal.

“Knowing what we know about the skeletal anatomy of all living and extinct mammals, it is difficult to imagine that a mammal-like Adalatherium could have evolved; it bends and even breaks a lot of rules," said Dr. David Krouse.

The gondwanatherian mammal has been named Adalatherium hui, which means “crazy beast”; the badger-sized animal was likely a giant in its time. Gondwanatherian was a mammal group that prospered for tens of millions of years, dying out 45 million years ago, with no known living descendants. 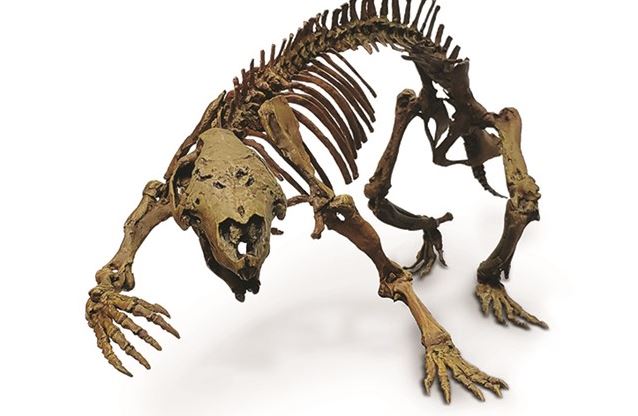 Courtesy of the Denver Museum of Nature & Science

The size of a modern-day opossum, the animal had more holes in its face than any known mammal. It had a snout with whiskers, with a huge hole on the top of the snout—there's no other mammal living or extinct that has anything like it. The mammal’s backbone also has more vertebrae than any other known Mesozoic mammal; it had oddly bent leg bones, long sharp claws, and a stubby tail.

The teeth are of particular interest.

“The strangeness of the animal is clearly apparent in the teeth,” says co-author Alistair Evans, from Monash University, Australia in Cosmos. “They are backwards compared to all other mammals and must have evolved afresh from a remote ancestor.”

Co-author Simone Hoffman from the New York Institute of Technology adds, "Adalatherium is the oddest of oddballs. Trying to figure out how it moved is nearly impossible because, for instance, its front end is telling us a different story than its back end."

It was likely a powerful digger and moved more like a reptile, moving side to side.

Krouse and the team have discovered other odd and out-there animals on Madagascar over the years, including an armored giant predatory frog, a vegetarian crocodile, and a buck-toothed dinosaur.

What do you think about this discovery of a real-life "crazy beast"? Sound off in the comments.