The documentary explores a 500-year-old manuscript that contains the earliest use of the four-letter profanity.

The F-word has been around a lot longer than some may think; it actually dates to the 16th century, and Scotland has a strong claim as the birthplace of the revered word. A new BBC Scotland documentary, Scotland-Contains Strong Language, follows Scottish actress, singer, and playwright Cora Bissett as she explores her country’s romance with colorful language.

In the hour-long film, the origins of the F-word are researched through the Bannatyne Manuscript—a compilation of Scottish literature from the 16th century, and contains the poems and writings of several Scots and medieval poets. The works were collected by a student named George Bannatyne in 1568 in Edinburgh when a plague swept through the city, forcing residents to stay at home. He put the manuscript together to fill the long hours of boredom, and it has become a very important piece of history for Scotland. It was gifted to the National Library of Scotland in 1772 by his descendants and has remained there under great care ever since. 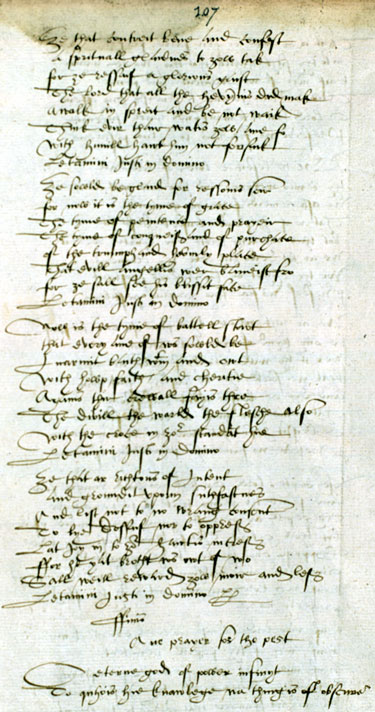 A poem included in the manuscript tells the tale of two poets engaged in what would be considered a rap battle in modern times. “The Flyting of Dunbar and Kennedie” was written by poet William Dunbar giving an account of a rivalry with fellow poet Walter Kennedy. The poem contains a line where Kenney imprints his opponent as a "wan fukkit funling." This phrase, according to the National Museum, is the first time the F-word has seen in writing.

"In the Flyting of Dunbar and Kennedy, when Kennedy addresses Dunbar, there is the earliest surviving record of the word 'f***' in the world.  It might never quite make the tourist trail, but here in the National Library, we have the first written 'f***' in the world. I think that's something to be proud of.”

The BBC documentary also follows Bisset as she speaks with experts and even joins a class at Glasgow University to try and understand why swearing offends people. You can view it on the BBC channel on Saturday, April 10, or stream the documentary online right here.

Now, we must note that there is, in fact, a claim to an earlier occurrence of the F-word written in the human hand and that one dates back to about 250 years prior to the Scottish manuscript. This occurrence was in about 1310, the 14th century, where an unusual name listed in a Cheshire court record appeared seven different times. You can read more on that here and decide for yourself.

Have you seen the new documentary on the F-word? Have you heard of any other early uses of the F-word or a variation of it? Sound off in the comments.