As the saying goes, "there’s life in these old bones yet." Some things are truly built to last, and this 11th-century flour mill shows us an example of the influence the past can have on present-day life. If the walls of the Sturminster Newton Mill building could talk, we might learn a thing or two about previous pandemics. Now, it's back in business to meet present-day flour demands during the COVID-19 pandemic.

The historic mill in Dorset, England, was a producing mill up until 1970 when it shut down commercial level production. A mill has been on the site since around 1016; the Sturminster Newton Mill is mentioned in the Domesday Book, a record of most of the property and land in England and Wales that was commissioned in 1086 by King William the Conqueror.  The current building was last rebuilt in 1650 and the north wing was rebuilt in the 18th century, all on the original building’s stone base and foundation.

The mill drew a lot of visitors after shutting down and was opened as a historic museum in the early 1990s by the Sturminster Newton Heritage Trust, a local charity organization. 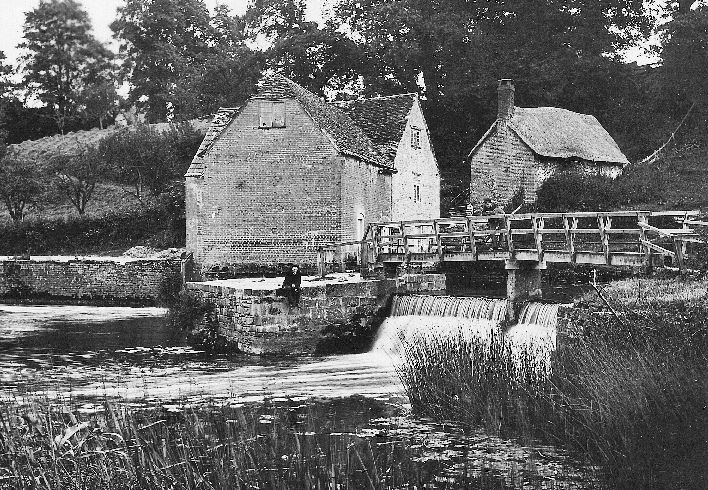 The Mill in 1925. Courtesy of the Sturminster Newton Mill.

Set on the River Stour, the mill used two undershot water wheels to power the mill until 1904 when it was upgraded to a single water turbine. Though it has not done much commercial production over the last 50 years, the mill has produced flour just two days a month during the summers and is sold in the museum gift shop. The mill, like most other businesses, was greatly affected when the pandemic hit, shutting down to visitors and drying up its source of income.

Pete Loosmoore is the supervisor of the historic mill and helped restore the equipment over 25 years ago. He has a personal connection to the mill, as his grandfather was the miller there for close to 50 years.

Shortly after the mill closed to visitors, the local community was hit by a flour shortage and Loosmoore and fellow miller Imogen Bittner knew what to do—they fired up the old mill and got to work. In just 10 days' time, they milled one metric ton of wheat, normally what they use in a full year. They have supplied over 200 bags to local bakers and stores and will continue to mill as long as they can get the wheat and there's a need.

They plan to stop commercial production once the pandemic is over.

Bittner told the Daily Echo that the smaller mill can help directly in the local community, as they have the supplies to bag smaller quantities of flour in individual bags, which many larger commercial mills don't do. "In one way we have an advantage over the bigger mills, which are used to selling large sacks to the wholesale trade and don’t have the machinery or manpower to put the flour into small bags," he said.

You can learn more about the history of the mill and how it all works in this video shared on the mill's website and YouTube channel:

This mill has outlasted multiple pandemics in its thousand years. In June 1348, the bubonic plague (known as the Black Death) entered England through the port of Melcombe Regis in Dorset, spreading through town and beyond. That pandemic took almost 200 million lives in the 14th century. The Spanish Flu Pandemic of 1918 was another notable pandemic that hit England after World War I, and was thought to be spread by soldiers returning from battle. That pandemic took at least 225,000 lives in the UK, and over 50 million worldwide.

The Sturminster Newton Mill has milled flour for generations in Dorset and is part of the history of the town and England. Its steadiness and ability to jump right back into production are a testament to the builders, the technology, and the people that have kept the mill in such good shape all this time.

What do you think about this ancient mill being brought back to life during the coronavirus pandemic? Give us the scoop in the details.

All Aboard for New Bus Trip From Delhi to London

What to Do With All of Those Apples You Just Picked: 5 Simple Recipes

VIDEO: Squirrel Hilariously Stunned by the Nuttiness That Is 2020