Want a Degree in Ice Cream? Italy's Gelato University Has You Covered.

Want a Degree in Ice Cream? Italy's Gelato University Has You Covered.

Have you ever looked at a college catalog and wondered where all the courses on chocolate pralines were? As it turns out, people who want to pursue a degree in delicious can do so at Carpigiani Gelato University in Bologna, Italy.

Despite that previous sentence reading like the plot synopsis of a food-based Adam Sandler rom-com, the Gelato University is a highly reputable institution, attracting students from all over the world. While the class structure and student life are different than what we typically imagine in a college, the Gelato University consistently draws more than 2,000 students per year and offers a whopping 500 different classes.

The course catalog covers everything that students need to make it big in the gelato business, both inside the kitchen and out. New students can expect to cover the culinary history of gelato along with the culinary properties of different ingredients and different preparation methods that range from old-school artisanal to industrial. Advanced courses cover a wider array of topics, from financing gelato products to worshipping new flavor combinations or exploring the minute chemistry of incorporating alcohol into batches. 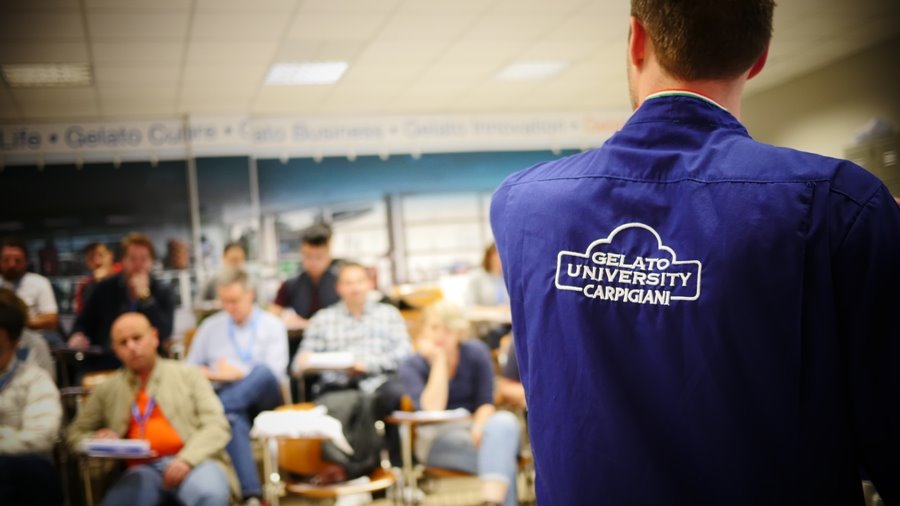 If you're anything like us, you might have done a double-take on what gelato actually is. To clarify: it's a type of ice cream that's popular in Italy. It's often set apart from other types of frozen desserts due to its low-fat content and dramatically lower air volume. This makes for a texture that's a lot denser than other icecream and has a bolder, richer flavor. Although gelato originated in Paris during the 1600s, Italy is currently responsible for both the largest production and consumption of artisanal gelato worldwide.

It's worth noting that education at Gelato University isn't just watching powerpoints and snacking; students who attend the in-person premium courses can expect to spend plenty of time in the lab exploring the different ways that production influences a gelato's properties. Additionally, these courses cover other important bases of ice cream, including sorbets and The Semifreddo, a type of gelato cake that also sounds like the title of an Adam Sandler movie about opera and/or baking.

Gelato University was founded by the kitchen supply giant The Carpigiani Group in 2003. Since then, they've grown considerably while attracting some top-shelf gelato talent from all over Europe. Many of the master chefs who teach at Gelato University are part of multi-generational gelato shops that boast their own secret ingredients and recipes.

While there's no guarantee that completing the upper tiers of their classes will deeply embed you into a cutthroat world of gelato politics—complete with backstabbings and forbidden gelato arts—it certainly can't hurt to try.