A 1,600-pound Great White Shark has surfaced about 100 miles off the Virginia Beach coast, according to reports by the shark research organization OCEARCH on August 9.

The Great White Shark, dubbed by OCEARCH researchers as Miss Costa (in honor of the agency's sponsor Costa Sunglasses), was originally "tagged" for study on September 23, 2016. Thanks to the electronic tagging system, researchers can track the Great White Shark's movements to learn more about animal behavior and marine life. Since September 2016, Miss Costa has traveled more than 8,648 miles in the Atlantic Ocean, OCEARCH reports.

The researchers were notified that Miss Costa was nearby thanks to a satellite ping from her electronic tracker last Wednesday around 9 p.m. At the time of the satellite ping, the 1,600-pound female shark was near the ocean's Great Continental Shelf, about 100 miles off the coast of Sandbridge, North Carolina. By 9:11 a.m. Thursday morning, she was 40 miles northeast, lounging in waters off the Virginia coast. 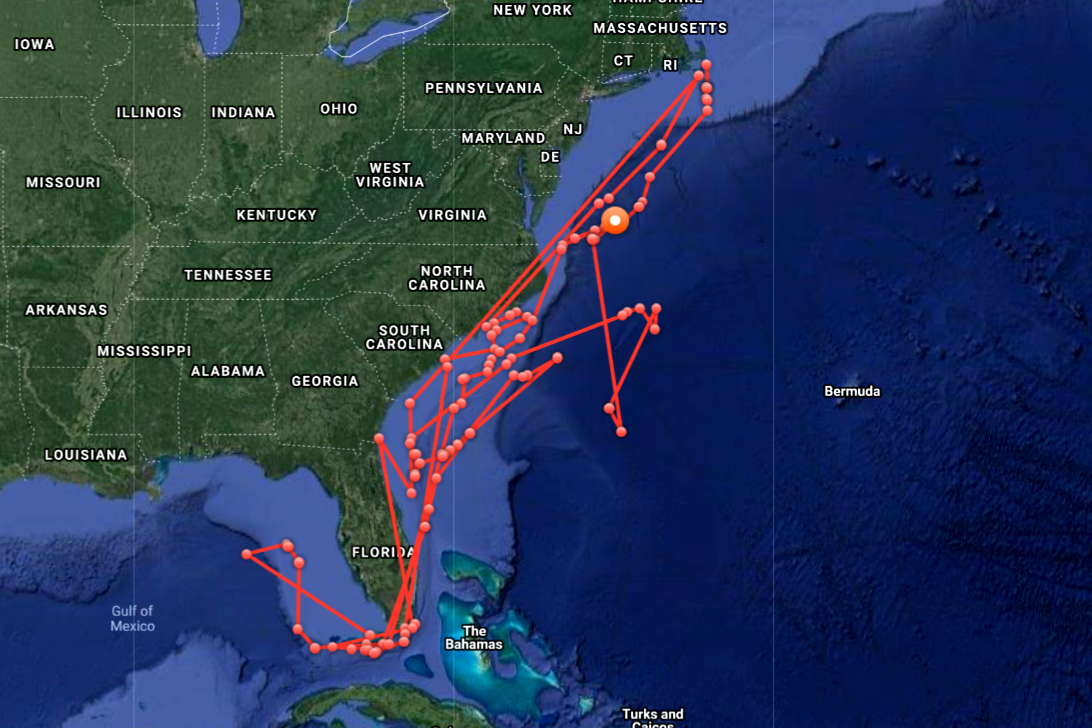 OCEARCH tracks Miss Costa, the 1,600-pound Great White Shark, as she continues up the East Coast after passing near Virginia shores on August 9, 2018. (Courtesy of OCEARCH.)

Miss Costa's associate, another Great White Shark named Hilton, was found by satellite ping to be relaxing in waters near Nova Scotia on Wednesday. Hilton's Nova Scotia hideout is a popular retreat for Great White Sharks to withdraw and give birth. Researchers suspect that Miss Costa might be pregnant with her own Great White babies and headed off to join her friend in Canadian waters.

Researchers are avidly tracking her movements. Despite the species' oblivious status as the iconic bogeymen of the deep, with their infamy spawning entire genres of horror fiction, Great White Sharks are still largely a mystery to researchers.

Erik Vance of National Geographic explains why studying these creatures is so important:

"We don’t know for sure how long they live, how many months they gestate, when they reach maturity. No one has seen great whites mate or give birth. We don’t really know how many there are or where, exactly, they spend most of their lives. To understand whether great white sharks need our protection, we must know not only how many there are but also where they go ... Today, with long-term, long-distance tags that can communicate via satellite, scientists are finally getting some clarity."

That's why OCEARCH researchers work so hard to understand this species. By tracking Miss Costa's movements, we can learn more about the ocean, climate change, ecosystem stability, and any other number of variable components that impact the balance of life.

Perhaps most fundamentally, humans want to understand the world around us. As of 2018, NOAA estimated that over 80 percent of the ocean has never been explored, and almost two thirds of the species that live there remain undiscovered.

Researchers do their best to make a dent in those whopping statistics. For the scientists at OCEARCH, that means tracking Great White Sharks.

It appears that, at press time, Miss Costa has traveled on from Virginia waters, now nearing the coast of Delaware. She is still a long way from Nova Scotia. We wish her the best of luck.

Here are the new rules for having your dog on Virginia Beach beaches.