In a pool of 3,000 of the country's most distinguished artists, academics, and writers, only 168 were chosen to receive the prestigious Guggenheim Fellowship. Among those select few were Matt Porterfield, Johns Hopkins Film and Media Studies lecturer, and distinguished JHU professor of English, Lawrence Jackson.

Porterfield, a lecturer in the Film and Media Studies department, is a Baltimore native who teaches courses in film production and theory, but his talents don't stop there. In his career, he has written and directed four films, including Sollers Point, which takes viewers deep into the working class neighborhood of Dundalk in Baltimore. The film won the top jury prize winner for an American independent feature at the 2018 Champs-Élysées Film Festival in Paris.

To learn more about the film, you can read a full review in The New Yorker.

Lawerence Jackson, on the other hand, is a Bloomberg Distinguished Professor of English who specializes in African-American literary history and is often recognized for his book Chester B. HImes: A Biography –  a finalist for the Pen/Falkner award. He also founded and leads the Billie Holiday Project for Liberation Arts, which "aims to foster the robust intellectual and artistic exchange between members of the university's Homewood campus and historic Baltimore neighborhoods." 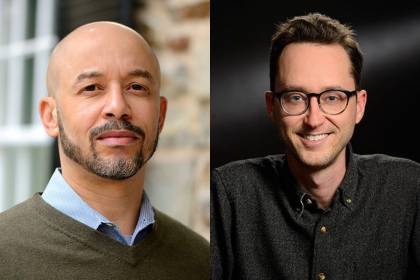 Founded in 1925 by businessman and former Colorado senator (1907-1913) John Simon Guggenheim to honor his son, the Guggenheim Foundation, to this day, has granted over $360 million to assist over 18,000 individuals, scholars, and artists in their pursuits.

John Simon Guggenheim was the brother of Solomon R. Guggenheim, for which the New York institution is named.

What are your thoughts? Have you seen Sollers Point or read Chester B. Himes: A Biography? If so, what did you think? Let us know in the comments section!