The consequences of Hurricane Florence were numerous, especially for the Carolina coast. People had to leave their homes, possessions were destroyed, animals had to be rescued, animals died, people received injuries, and sadly, some people lost their lives.

But, besides the destruction the hurricane brought, it left some interesting things behind -- specifically an animal that definitely didn't live here before. So, let's say our hellos to the two Portuguese Man o' Wars that were found on the Virginia side of Assateague, and in Ocean City, Maryland! 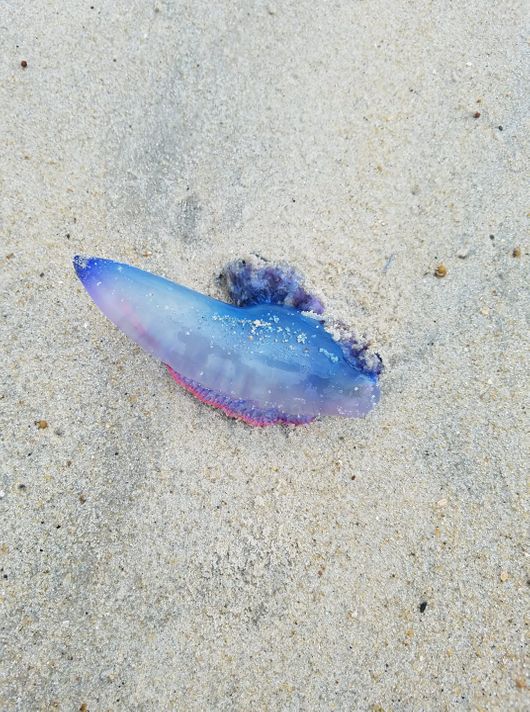 Not many people stumble upon interesting finds like this one on the beach -- or at least I don't. But Jess and Gage Stout did. The pair was walking along the beach on the Virginia side of Assateague, picking up trash, when they spotted something that reminded them of a vibrant blue balloon. But, it turned out to be a Portuguese Man o' War, a dangerous siphonophore species.

But don't get scared yet! In simpler terms, the Portuguese Man o' War is an organism made up of other organisms that coexist together and possess tentacles. They can get up to as long as 165 feet, and they can release powerful toxins. And while these stings won't kill you, we highly recommend that you keep your distance because you wouldn't leave the encounter unscathed. However, we also highly recommend you whip out your camera to capture the beautiful sea creature if you ever get the chance to see one!

Have you seen any interesting wildlife like the Portuguese Man o' War on your beaches? What would you do if you found strange animals on the beach? Share your stories in the comment section below!

Sharks were not swimming in the streets. Here are other viral hoaxes we avoided during Florence.