After Criticism, The Newseum Stops Selling Trump-Inspired T-Shirts at Its Gift Store

After Criticism, The Newseum Stops Selling Trump-Inspired T-Shirts at Its Gift Store

The Newseum here in Washington, D.C., is one of the most respected museums in the city, but it's recently been criticized for its controversial gift shop merchandise.

After coming under fire for selling a "You Are Very Fake News" t-shirt (inspired by President Donald Trump) in their gift shop, The Newseum made the decision to pull the controversial t-shirt from shelves.

"The Newseum has removed the 'You Are Very Fake News' t-shirts from the gift shop and online," The Newseum said in a press release. "We made a mistake and we apologize. A free press is an essential part of our democracy, and journalists are not the enemy of the people."

The debacle all began on Friday, when Poynter, a media-news publication, publicized what they believed to be an indiscretion on the part of the Newseum, drawing attention to Trump-related merchandise being sold on the premises and online -- and particularly a t-shirt with the "You Are Very Fake News" phrase, which has been frequently repeated and made popular by Trump.

But it's not the Trump connection that is the main issue here.

The Newseum’s mission is, of course, to promote and honor journalism -- and democracy through journalism. And in that sense, it would be important to provide both side of an issue, all opinions on the political spectrum. The gift shop actually sells merchandise from both major parties -- such as the "Make America Great Again" hat and a mug featuring a quote by Hillary Clinton.

But people feel that there is a difference between selling Democratic and Republican key chains in the same place and promoting something that has fundamentally threatened the existence of journalism as we know it. And the "You Are Very Fake News" t-shirt seemed to cross a line.

According to a report by the Washingtonian Magazine, the Newseum originally defended its practice:

“Newseum officials, naturally, defended the practice: 'As a nonpartisan organization, people with differing viewpoints feel comfortable visiting the Newseum, and one of our greatest strengths is that we’re champions not only of a free press but also of free speech,' Newseum spokesperson Sonya Gavankar told reporter Daniel Funke.”

But eventually, the Newseum came to understand that people were viewing the t-shirt to be contradictory to the institution's values. They made the decision to pull the shirt in question. 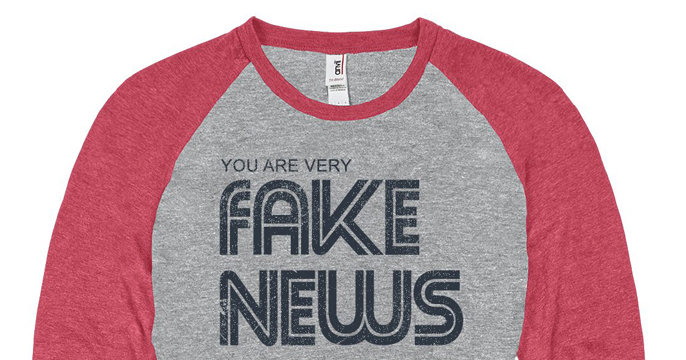 But in their press release, they also responded to critics who aren't happy they continue to sell other Trump-related items.

"Questions have also been raised regarding other merchandise. As an organization that celebrates the rights of people from all political spectrums to express themselves freely, we’ve historically made all types of political merchandise available for our guests to purchase. That has included former and current presidential slogans and imagery and merchandise from all political parties. We continue to do so in celebration of freedom of speech."

Where do you stand on this issue? Continue the conversation in the comments below!

There are some pretty amazing exhibits at the National Building Museum right now. Check them out here!