Colorado Forests Continue to Be Ravaged by Bark Beetle Infestation

Colorado Forests Continue to Be Ravaged by Bark Beetle Infestation

If you've driven through the mountains almost anywhere in our state, you've no doubt seen mountainsides of dead trees. Bark beetles have been treating Colorado's forests like a buffet, reproducing in a tree's inner bark and wiping out its biosystem. Unfortunately, it looks like the beetle kill isn't ending any time soon.

According to a 2018 Colorado State Forest Service (CSFS) and U.S. Forest Service aerial survey that monitors the health and condition of millions of forest acres across the state, the bark beetle outbreak is spreading, with the spruce beetle causing big problems. The areas that are getting hit the hardest by the spruce beetle are around Rocky Mountain National Park, as well as parts of the San Juans, West Elk, and Sawatch Range.

Spruce beetles have invaded more than 1.8 millions acres of forest, affecting 40 percent of the state's spruce and fir since 2000. The survey also found that approximately 178,000 acres of high-elevation Engelmann spruce trees were affected by beetles in 2018. One-third of the affected acres were in new or previously unaffected forest areas. 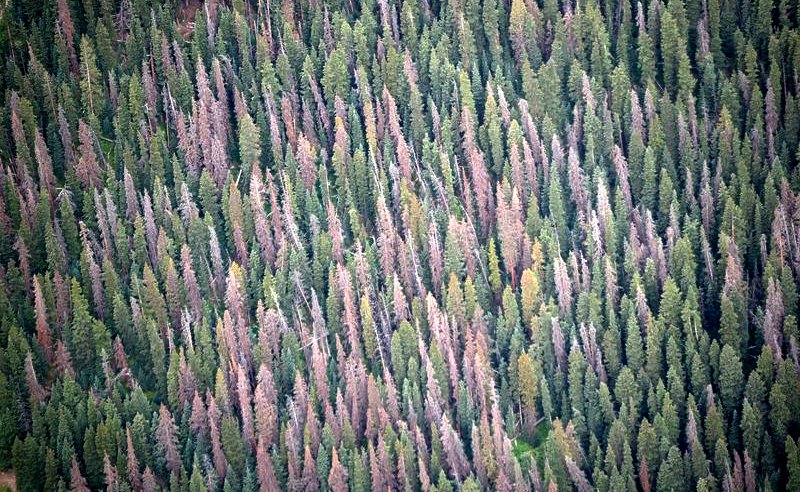 The mountain pine beetle has also been one of the biggest issues to our forest, ravaging lodgepole pines, especially on the Western Slope and the northern part of the state. The CSFS estimated that the pine beetle has killed more than 3.4 million acres of forest, leaving around 800 million dead trees standing and creating a serious fire hazard.

In addition, the roundhead pine beetle is eating its way through ponderosa pine in southwest Colorado, and the Douglas-fir beetle is impacting low-elevation forest in central and southern parts of the state. In slightly better news, western spruce budworm outbreaks have declined compared to 2017, although it still defoliated 131,000 acres of spruce and fir.

Bark beetles are spreading rapidly due to the warmer winters we've had, as well as drought conditions across the state. Generally, harder winters with colder temperatures can kill beetle eggs and larvae wintering under a tree's outer bark.

"Related to general climate warming, average winter temperatures in the Rocky Mountains have been higher than normal over the past 10 years. Trees have also been weakened by a prolonged period of low precipitation. The combination of milder temperatures and low precipitation has aided a vast outbreak of beetles," says the National Park Service.

Mike Lester, state forester and CSFS director, says “Colorado’s forests are important to the ecological and economic health of our state ... Our efforts in partnership with the U.S. Forest Service ensure that we understand the condition of our forests, so we can design the best treatments to enhance forest health.”

Lester relates the CSFS is dedicated to providing timely, relevant forestry information to the citizens of Colorado to achieve resilient forests. CSFS publications about spruce beetle, Douglas-fir beetle, and many other pests, as well as how private landowners can manage them, are available online on the CSFS publications page.

For information on insect and disease conditions in your local area, contact your Colorado State Forest Service field office.

A giant Lego-themed bar is coming to Denver this summer!