Boulders and debris cleared off roads from flooding after the 416 Fire in Durango. Courtesy of Becky Talley.
Becky Talley 8/10/18
Join the Community
shares

Flood risk after a wildfire poses a severe threat for those in burn areas.

Colorado is on fire this summer. Literally.

Between the 416 Fire near Durango, the Spring Fire in Costilla County, and the many, many others that have flared up, more than 200,000 acres have burned across the state. And, the season isn’t over yet.

With the drought conditions the state is under, we are in dire need of significant rainfall to reduce our fire risk. But, unfortunately for those who live in and around burn areas, rain can be more of a catastrophe than a godsend.

A powerful video of flash flooding in the 416 fire area, courtesy of Andrew Loya, showed a raging river of water wiping out all in its path, including cars, boulders, and more. The damage was immense, including shutting down a KOA campground, damaging local houses and businesses, and doing damage to the narrow gauge train tracks. Once it reached the Animas River, the runoff caused serious problems for fish and other aquatic life. 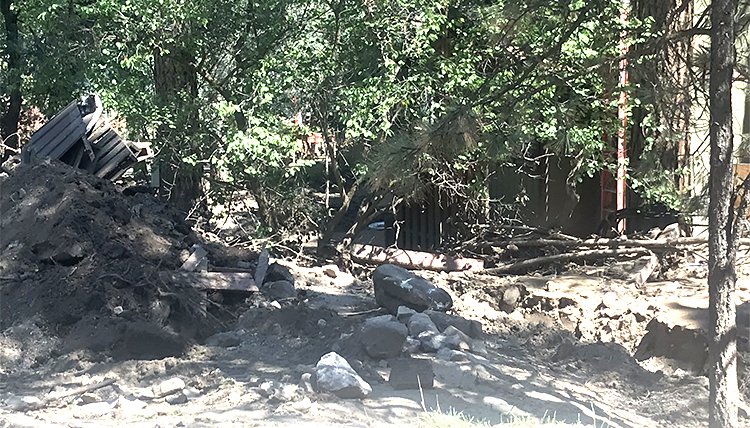 Flood damage in Durango after wildfire. Courtesy of Becky Talley.

While it was reported that the rainfall in this instance was torrential, these floods can happen even if the rainfall is modest. How? It’s a direct result of what wildfire does to a landscape.

In a normal ecosystem, vegetation helps to absorb rainfall, which helps to reduce runoff. However, a wildfire burns everything in its way, leaving charred, barren ground, and a lot of ash, none of which can hold much water. When the rain falls, the flood (often much larger in size than the amount of moisture would seem to warrant) and mud will run and rage. These floods are generally strong enough to transport downed trees, boulders, gravel, and much more.

To add insult to injury, flooding can present a danger in burn areas for up to five years after a wildfire, according to Ready.gov. The water not only does physical damage but also threatens clean water supply, electrical lines, and other necessities.

Because flooding (both in burn areas and just in general) can happen in a flash, always stay up to date on local weather alerts and have an evacuation plan ready in the event of severe weather. Be hyper aware of driving in burn areas during rainstorms, as well, and never try to drive through a flood, no matter how shallow or slow moving the water seems.

The Colorado Division of Fire Prevention and Control has created the Wildfire Information Resource Center with tips, updated fire information, and more. It also provides a Wildfire Watch app, which helps you “keep tabs on wildfires and relief efforts across the state of Colorado,” according to the site.

In addition, the American Red Cross has a host of resources for wildfire and flood victims, as well as a way to donate to your local chapters to help those impacted. You can also contact your local chapter to find out what help people may need during and after a disaster. The organization also offers a free Emergency app (also available on Google Play), that will help you monitor conditions, prepare for hazards, check to see if loved ones are safe and let them know you’re safe.

Storm a Colorado castle (or just take a tour).