As the month of May comes to close, thousands of students around the country will be graduating from college. These graduates will soon have to make a decision on where to start their life. And where should they go? Well, a new study by GOBankingRates has named Maryland the No. 1 state for college graduates to begin a career.

The study analyzed data and ranked all 50 states from best to worst. States ranking near the top had a higher percentage of college graduates, higher incomes, and good livability rates. Rounding out the top five were Massachusetts, Minnesota, North Carolina, and Connecticut. 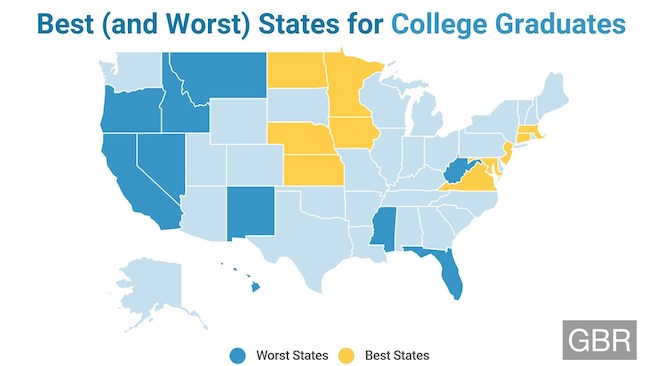 The study looked at median income, housing costs, quality of life, and the job market, all factors important in choosing a place to live and work. States with better housing scores had a healthy rent-to-income ratio, lower median home price, and shorter time period required to save for a down payment. The unemployment rate and percentage of jobs available to college graduates was also a big factor.

According to the study, 21 percent of Maryland’s population 25 and older has a bachelor’s degree. People with degrees in Maryland also have a median income of $61,131. The unemployment rate for college graduates in the state is also lower, at 2.8 percent.

Numbers from the U.S. Department of Labor Bureau of Labor Statistics in March show Maryland added 2,800 jobs in the education and health services sector and 2,500 jobs in finance and insurance, positions more likely to be held by a college graduate.

States ranked in the bottom of the study include Idaho, Florida, Mississippi, Hawaii, and Nevada, which ranked last. Washington, D.C., was not included in the study, but Virginia came in at No. 6, just out of the top five.

Is your college graduate staying in Maryland, or leaving for another destination? Tell us in the comments!