These baby penguins are the literary event of the year.

Spoiler alert: The baby African penguins at the Maryland Zoo have been named, and the results are beyond cute.

In November, the zoo held a public poll to decide the theme for the 2018-2019 baby penguin names, and the people have spoken. Literary characters won by a landslide, with almost half of responders choosing the fiction theme over types of pasta and shades of color (though, they're all winners in our book). The names weren't given immediately, however; along with an ID number, the baby chicks had to wait to be named once DNA tests were able to confirm whether they're male or female.

Four penguins have been named so far, and they're all adorable: Coraline, after the main character in Neil Gaiman's smash fantasy novel Coraline; Knightley, the landowner from Jane Austen's Emma; Zorro, the masked hero in the series of the same name created by Johnston McCulley; and of course, Gatsby, the elusive millionaire in F. Scott Fitzgerald's masterwork, The Great Gatsby. 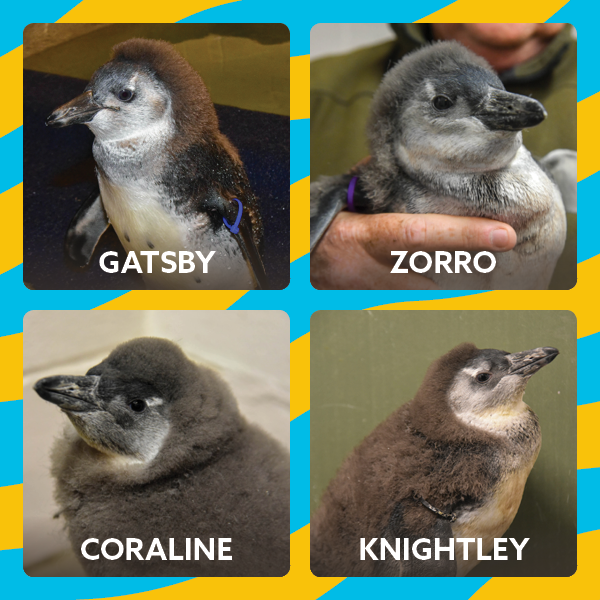 Courtesy of the Maryland Zoo

Past themes include types of fish (Tetra, Trigger), space (Astrid, Hubble) and scientists (Newton, Tesla). The Penguin Coast animal care team, who take care of the entire penguin colony, got to select the names.

The Maryland Zoo has been breeding penguins since 1967 and holds the largest colony of African penguins in the United States. Last spring, the zoo celebrated their 1,000th penguin chick named Millie (short for millennium).

The 2018-2019 breeding season is halfway over, with the last chicks planning to hatch in spring. But for these baby chicks, their stories are just beginning. Want to see these cuddly creatures in person? Click here to view hours, tickets prices, and more.

What do you think of the new baby penguin names? Let us know in the comments below!

The Chincoteague ponies are in danger. Learn all about their plight here.

Check out Maryland's own Our Community Now homepage for news, events, and features that bring out the best of our great state!