No, he's not Chuck Norris, but this guy could give him a run for his money.

Travis Kauffman has had a pretty intense February. For a guy who was attacked by a juvenile mountain lion, that he subsequently fought and killed, has become a hot ticket for the press, and has triggered nationwide interest in his relationship status (sorry, hopeful daters, he's taken), he's pretty put together.

Kauffman, 31, who has lived in Fort Collins for about four years, returned to the site of the attack with Colorado Parks and Wildlife (CPW) on February 11, as well as talked to the press for the first time on February 13, reliving his harrowing ordeal.

It was a beautiful day on February 4 when Kauffman parked at Lory State Park near Fort Collins to start a multi-mile trail run through parts of Horsetooth Open Space. Due to ice, he detoured to the West Ridge Trail and met nature in all her claws-and-teeth glory.

"A quarter of a mile into that run, I heard some pine needles rustling behind me. Luckily I was able to actually turn my head. I'd say more often or not, I wouldn't turn my head just thinking it was a deer, or a rabbit, or some other small woodland creature. In the back of mind, there was always the thought it could be a 'something else'. And this something else turned out to be a mountain lion, so one of my worst fears was confirmed." 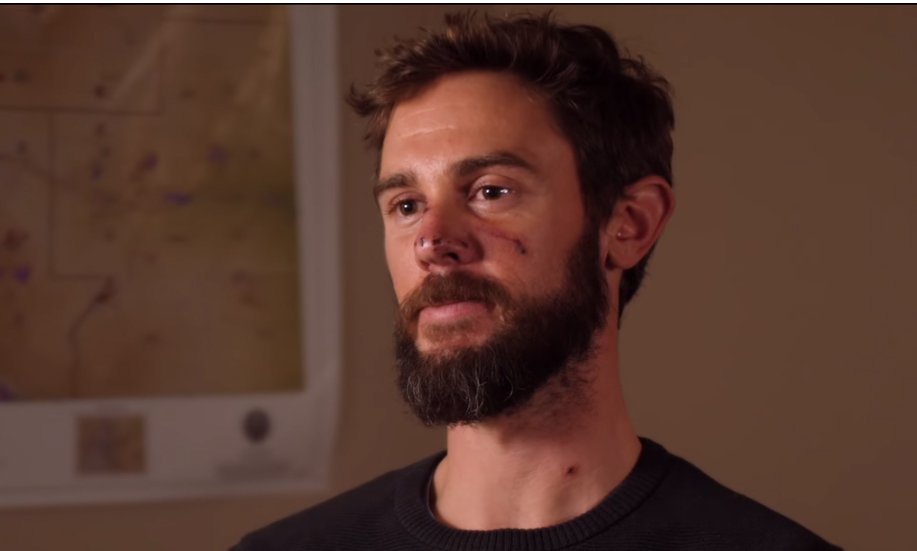 Travis Kauffman a week after the attack. Courtesy of Colorado Parks and Wildlife (YouTube).

He said his heart sank once he realized what it was. The cat was originally about 10 feet away, and Kauffman tried to scare it off by waving his arms, but the mountain lion kept advancing and attacked.

"As it got close it just kind of lunged at me. I threw my arms up and it latched onto my wrist, so I was just kind of protecting my face," Kauffman said, the scratches and trauma still visible on his face. "It just started clawing along my face and my legs, and I was just screaming the whole time."

He adds that he yelled (his best barbarian yell, he joked), try to throw the cat off him, and ended up tumbling off the trail into a wrestling match for his life. The mountain lion still had his wrist locked in his jaws and was thrashing, but he was able to pin down the back legs with his knee. He tried to disable it with sticks and a big rock. Those didn't work, so he transitioned his body weight and was able to step on its neck, eventually suffocating it.

"After I was finally able to get it to release, by unfortunately killing it, I was able to run back to Towers Trail. But that whole run back, I was on crazy high fear," Kauffman says, adding that he was realizing all the rock overhangs were perfect lion perches. He saw some tracks in the snow that could be mountain lion tracks.

"The fear was definitely tangible then."

He ran a long two miles before he found another runner on the trail, as well as another couple, who helped him to a parking lot, took him to the hospital, and retrieved his car for him.

In all, Kauffman had 17 stitches on his cheek, six on the bridge of his nose, two on the other cheek, and three in his wrist. He also had a lot of puncture wounds from the lion's claws.

"So far, I'm about a week out and everything is healing nicely. I feel great," Kauffman related.

And in true He-Man form, Kauffman recognizes the man versus nature scenario of his plight, but he says he doesn't plan to stop hitting the trails any time soon. He encourages you to do so, also, but pay attention, don't wear earbuds, or go with a buddy.

Kauffman returned to the trail where it happened with CPW officials and discussed the incident. Check it out below, courtesy of CPW.

Here's everyone we know so far who will be performing at Red Rocks in 2019.