Who says you can't be fashionable during the pandemic?

Forty-nine-year old Nicola Matthews decided to bring a little joy to her Waltham Abbey neighbors while her country continued its fight against the coronavirus. Taking inspiration from the famous Amanda Holden, a host on Britain's Got Talent who was known to dress in gowns while hanging out, Matthews began dressing over-the-top in the simple act of taking out the trash.

"It was so funny dressing up and going out to push my wheelie bin," commented Matthews. "It was lovely to cheer people up through these times, and to get the dresses out. We have less and less need for long dresses these days."

Indeed, the first time she dressed up, one of her neighbors ended up taking a picture of her. Since then, every Wednesday Matthews dons an outfit that stands out while she wheels her trash bin outside. Some of her dress inspirations included Desperate Housewives, Marilyn Monroe, and Prince's Purple Rain. 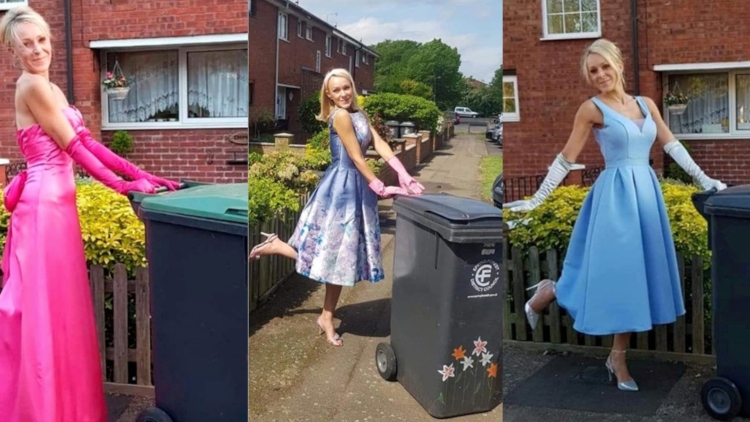 Nicknamed "Wheelie Bin Wednesday," Matthews decided to take advantage of the attention she was gaining on what was later called "Whimsical Wednesdays." She ended up dressing up and taking the trash out for charity. She even walked 3.5 miles in May in 4-inch, glittery heels on a hot day to raise money for her local fire station.

"I was overwhelmed to raise $875, I thought I'd be doing well to get $200 ... It was so lovely how my neigbors all came out and clapped and cheered me on," said Matthews. "That was the most important thing for me."

Matthews was overall grateful for the influence she had for charity.

As a makeup artist, Matthews has certainly done her job well and brightened the lives of many in her Essex community. With a wardrobe full of 25 gowns and 31 pairs of shoes, she no doubt was inspired by her late grandmother, who was a professional dressmaker.

"My nan always said I made a great clotheshorse, and the dresses she made me will always be my favorites ... It was a really lovely thing to do, and I enjoyed it but 20 weeks was definitely enough."

Matthews' "Whimsical Wednesdays" will certainly be missed if she's deciding to discontinue it. Whatever she decides, it's evident she's brought much joy to both her viral fans and neighbors.

Do you know anyone else dressing up during the pandemic? Let us know in the comments.