Avalanches Are Running at Historic Levels, and the Season Could Extend Into Spring

Avalanches Are Running at Historic Levels, and the Season Could Extend Into Spring

Exceptional amount of snow in the mountains has created extremely dangerous avalanche risk.

Unless you've been boycotting winter, you've heard all over the news about the I-70 avalanches, road closures, and mitigation efforts to keep snowslides in control. However, there are still avalanches coming down on their own, such as the one that rolled over Highway 91 on March 7, burying several cars -- luckily all people were accounted for after the slide.

Heavy snow that has walloped the high country over several storms. The top layer of each of these storms freezes over, creating, in effect, a slick surface for the next layer of snow on top of it. That can lead to sliding slabs of snow, triggering avalanches. The Colorado Avalanche Information Center said that several avalanches are running bigger, and in some cases for the first time, in 20 or 30 years. So far, there have been five confirmed fatalities due to slides.

Avalanche mitigation on the Disney slide path. This path hasn't hit the highway since 1957. Courtesy of Colorado Avalanche Information Center.

“Some are even taking out forests … We’ve seen several avalanches take out some very old trees,” Spencer Logan, a forecaster with the Colorado Avalanche Information Center (CAIC) said to CPR.org.

This season marks the first time in the state's history that four backcountry zones are at an "extreme" level of avalanche danger in Summit County, from Vail, Aspen, Gunnison, and the Sawatch Range. 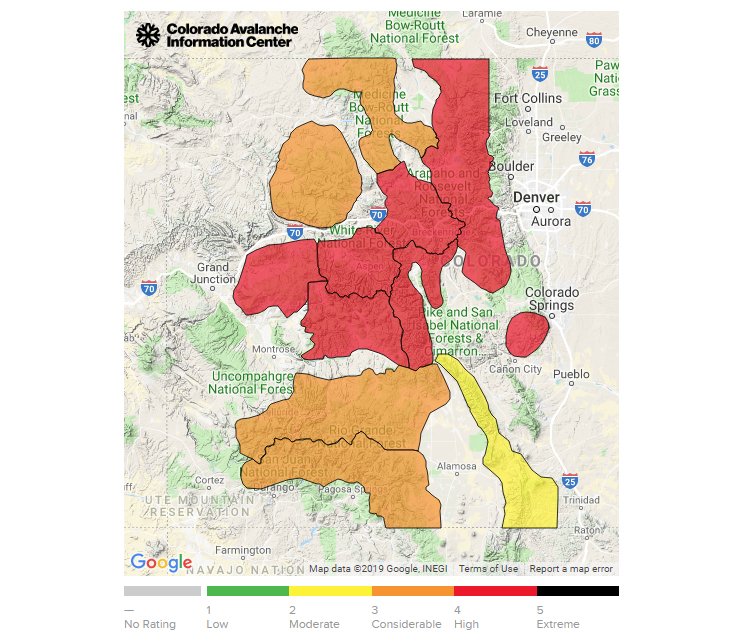 Avalanche forecast map as of March 8. Courtesy of CAIC.

And with more snow and strong wind in the near future, the danger is only going to increase.

“Looking a little bit further out, we’ve got a lot of snow on the ground that could mean avalanche problems last late into the spring,” Logan said to CPR.org.

For now, CDOT is recommending drivers be extremely careful on, if not avoiding entirely, I-70 West of the Eisenhower Tunnel. Outdoor enthusiasts are being told to avoid the backcountry altogether during this time. You can stay up to date on the latest avalanche information on the CAIC website or at codot.gov.

When driving in the high country, the avalanche risk remains and the potential for cloud avalanches remains, even after mitigation. CDOT offers these tips should you encounter an avalanche or powder cloud while driving:

This thrilling adventure was named the No. 1 Colorado bucket list activity!

Try "Glamping" in These Yurts Around Virginia