Coyote sightings are on the rise. Follow these tips to avoid pet conflicts.

The Colorado Parks and Wildlife (CPW) says that coyotes are making their presence known in the metro areas of our state. That's because it's the mating season for these wild canines, which means they are going to be quite a bit more active, whether in the wilderness or living in the open spaces of cities.

This also means that they are likely to be more aggressive and territorial, as they have their eyes on the goal and competition isn't tolerated.

That's not great news for dogs big and small, as coyotes could see them as a problem. Add that most any small pet could be prey for a coyote at any time, and it's extremely important to take the proper precautions for the sake of all animals involved, including the coyote.

"[We receive] numerous calls about coyotes following people walking dogs. It is not uncommon for a coyote to trail a pet walker from a distance away until the dog has left the area that the coyote perceives as their territory. Dog walkers are encouraged to be aware of their surroundings, to keep pets on a leash and to haze any coyote that gets too close to them or their pet," says CPW.

The Urban Coyote Initiative suggest using a leash no more than six feet long, stick to open areas and avoid areas with thick brush and avoid walking your dog at sunrise or sunset.

"While there can be misunderstanding about what is happening during an encounter, what is readily apparent is that the best thing for humans, dogs, and coyotes living in the same area is to minimize the possibility of an encounter. Play your role in maintaining a coyote’s fear of humans, and by extension, maintaining distance from pets," the initiative suggests. 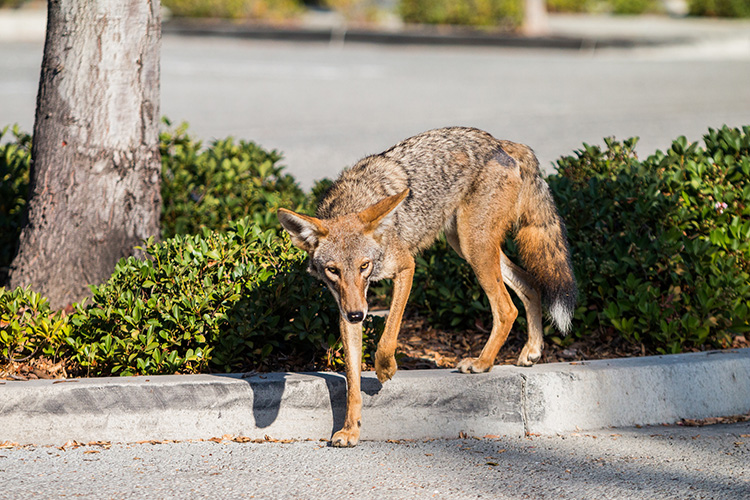 Courtesy of the National Park Service.

Here are the suggested tips from the CPW to help prevent conflicts between coyotes, pets, and people:

Protecting Yourself and Your Family

In addition, the CPW requests that any aggressive coyote behavior toward people be reported to local law enforcement or to the CPW office at 303-291-7227.

Colorado will be seeing a huge migration of bald eagles between now and March!

Beat the Heat with These 5 Shady Playgrounds in Northern Virginia

Take a Water Taxi All Over the Potomac River Access Points in the DMV!