3 Ways Ice Cream Is Different in Other Countries

3 Ways Ice Cream Is Different in Other Countries

Suffering from a brain freeze is a universal thing ...

Ice cream seems to be universally delicious, everywhere you go—and every country seems to have its own unique spin on it. Here are three of our favorite regional takes on ice cream from around the world!

Spaghettieis is a German ice cream dish that resembles a plate of spaghetti (duh!). Chunks of vanilla ice cream are passed through modified potato ricers or noodle presses to give a distinct, stringy texture to this dish. It's also pretty common to top it with strawberry sauce and white chocolate to create a dish that could visibly pass for spaghetti to the untrained eye. Despite that, it still looks delicious. 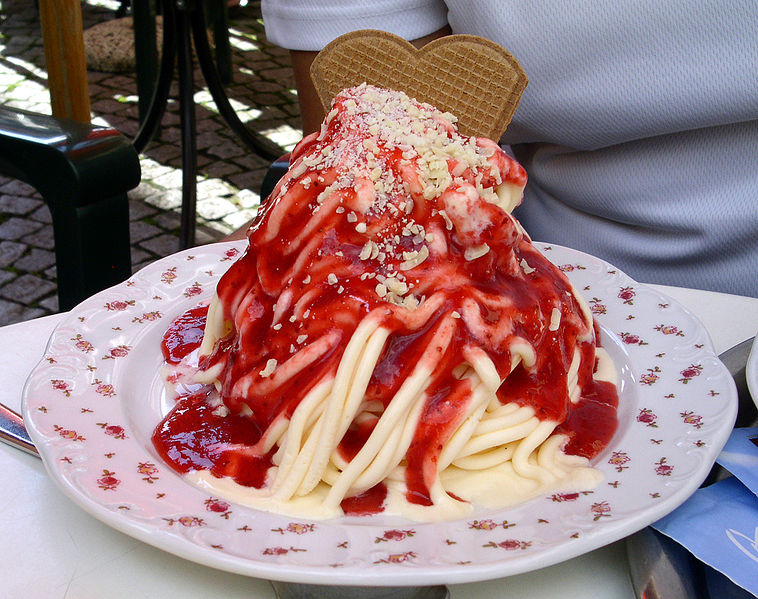 A suspiciously large amount of German cookbooks all share a similar story about the origins of this dish. Supposedly, it was first served by Dario Fontanella in 1960. As the story goes, children would often break down crying whenever he served them spaghettieis because they were expecting ice cream, not a plate of noodles. We're unsure of how true this story is, but making children cry with spaghetti trickery is a weird thing to be proud of 60 years later.

There's still no word on if Eminem's mom does a version of this dish.

Dondurma is traditional Turkish ice cream with a think, chewy texture. Unlike American ice cream, it's made with several thickening agents, like a resin made from orchid flowers. The most notable part about Turkish dondurma isn't the stretchy nature of the dish itself, but rather the absolute malarky that you have to put up with in order to get some.

Turkish ice cream booths have gained a lot of internet fame for their whimsical, pranking nature. It's not uncommon for dondurma vendors to dress wearing traditional Ottoman clothing and turn any attempt at purchasing ice cream into a routine of sneaky pranks. Take a look at the video below and just watch the emotional rollercoaster involved with getting a single scoop of ice cream:

Watch how many times he reaches for the cone, only to grasp thin air. Observe how all five stages of grief dance across his face. In the end, there is indeed ice cream, but at what cost?

Ice cream generally isn't something that we picture cooking on streetside carts. Thai ice cream rolls, however, are prepared using a method that's not commonly seen anywhere else in the world.

To make these ice cream rolls, vendors use special stainless steel cooking plates that are continually chilled to freezing temperatures. Ice cream chefs combine special dairy mixtures with fresh ingredients and then toss them over this chilling surface in a similar method to stir-frying food. Once the ice cream is set, they flatten it and scrape it off into tiny rolls. You can watch the process below:

Although this rolled ice cream uses similar ingredients to American ice cream, the process of "cooking" it fresh imbues a completely different taste and texture. Rolled ice cream tends to be harder, and any additional ingredients have a more pronounced taste. We're not one to split hairs though: any ice cream that you leave unattended around us is going to vanish long before it has time to melt.

Do you know about any other regional ice cream delicacies? Let us know in the comments!