Next time you buy Ben & Jerry’s Ice Cream at the grocery store, you can also pick some up for your dog. The Vermont-based ice cream company has finally created a version just for our furry friends. The frozen treat is sunflower butter-based and comes in two flavors; "Pontch’s Mix" and "Rosie's Batch."

In celebration of the new products, the company will be selling limited-edition dog leashes, toys, and dog bowls. Ben & Jerry’s "Doggie Ice Cream" can be found in grocery stores, retailers, and pet food stores.

The frozen dog treats are actually named for two dogs at Ben & Jerry’s main office, Pontch and Rosie. Pontch is an adorable French Bulldog and Rosie is a mixed-breed rescue.

"We know our fans love their dogs and treat them like family," said Lindsay Bumps, a Ben & Jerry's Global Marketing Specialist who also happens to be a certified veterinary technician. "We created this product line so pups can enjoy something even better than belly rubs. Doggie Desserts are the sweetest treat they'll ever put their paws on." 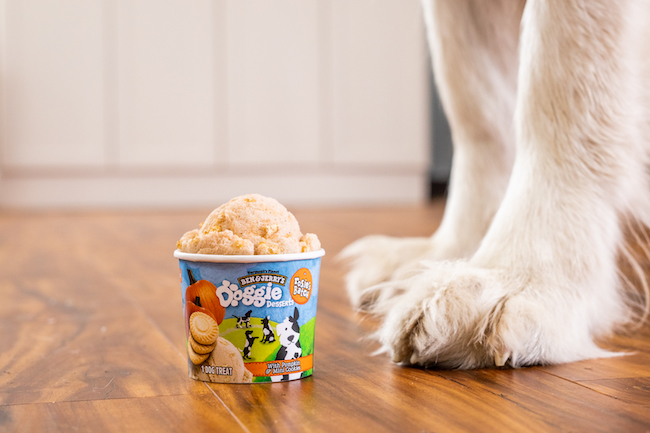 Pontch’s Mix is made with peanut butter and pretzels, while Rosie’s Batch has mini cookies and yummy pumpkin. The ice cream can be purchased as singles or in multi-packs, starting at $2.99.

Will you be letting your dogs try this new flavor from Ben & Jerry's? Do you think it's a strong contender for Starbucks' Puppuccinos? Comment below.