The special brew is coming to taps near you in Maryland, Virginia, and D.C.

Two of Pennsylvania’s oldest institutions have partnered on a new beverage just in time for the holidays. Yuengling Brewery and Hershey’s Chocolate have created a limited-edition beer called Yuengling Hershey's Chocolate Porter. The chocolate beer will be available on tap at select bars and restaurants across the East Coast beginning in mid-October.

The companies collaborated on this exclusive porter to create a craft beer that would be beloved by both beer lovers and chocolate lovers, alike.

"We saw a unique opportunity to partner with Hershey's, a brand known worldwide for its iconic, delicious tasting chocolate, to deliver fans our first-ever beer collaboration,” said Jennifer Yuengling, Vice President of Operations and sixth-generation brewer. “We spent nearly a year developing our Yuengling Hershey's Chocolate Porter and are excited for the world to indulge in the classic taste of Yuengling Dark Brewed Porter blended with the unmistakable taste of Hershey's chocolate." 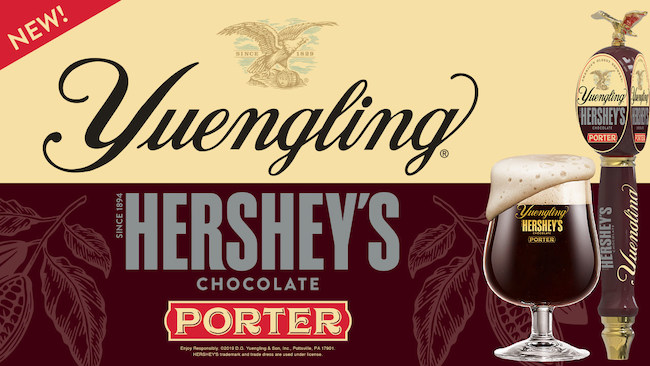 The brewers started with Yuengling’s 200-year-old porter recipe and paired it with the rich chocolate taste of Hershey’s world-famous chocolate. The result is a 4.7 percent ABV porter highlighted with notes of chocolate and caramel. The chocolate porter will only be available on tap in bars and restaurants in 13 states, including Maryland, Virginia, and Washington D.C. Yuengling has a handy locator on its website to find an establishment near you that carries the chocolate beer.

Yuengling Hershey's Chocolate Porter was created to complement the flavors of the holidays from Halloween to Valentine’s Day, but will only be around while supplies last. So if you’re over 21 and want to try this new concoction, get it before its gone!

Would you drink chocolate beer, or do you prefer these two goodies on their own? Tell us in the comments!