IHOP Is Doing It Again: Changing Its Name for a Little Promotion

IHOP Is Doing It Again: Changing Its Name for a Little Promotion

The pancake restaurant teases new name change to be announced on Monday.

For the second time in two years, IHOP is mulling a name change. In June of 2018, the International House of Pancakes ran a promotion changing the ‘P’ to a ‘b’ to highlight the Angus burgers sold at the breakfast restaurant. The public wasn’t exactly thrilled with the change and was reluctant to think of IHOP as a serious burger joint. But as the saying goes, “There is no such thing as bad publicity.” So IHOP is giving it another try.

IHOP began promoting the upcoming change on Memorial Day with a video showing old social media posts from the IHOb switch. The big name reveal for the pancake chain will happen on Monday, June 3, 2019. The Twitterverse has already been making prognostications, and IHOP has been answering some of them.

Mr. Peanut even chimed in: “Peanuts!” 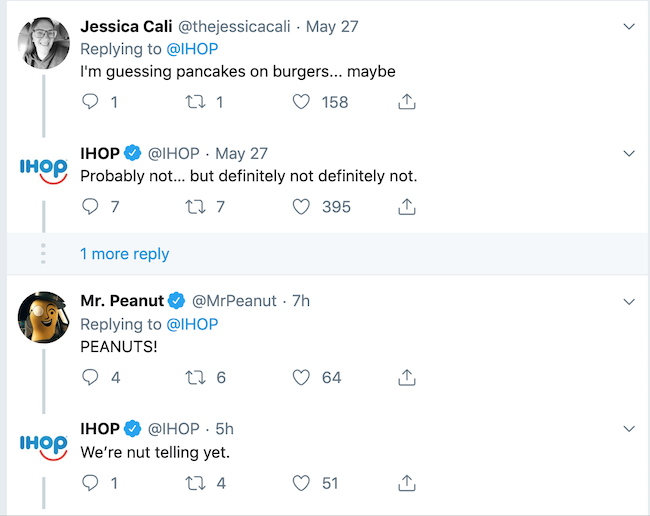 We looked at the menu for some ideas on what it could possibly be. Maybe they’ll add more waffles: IHOW? How about omelets: IHOO? Or, maybe they’ll keep the regular letters and add something else. A year-long promotion of all-you-can-eat-pancakes would probably please the fans: IHOP-FOR-ALL. anyone? Guess we will just have to wait until Monday.

International House of Pancakes opened in 1958 in Burbank, California. The original stores resembled a Swiss chalet, the blue-roofed A-frames welcoming visitors with a menu of pancakes and breakfast items. The chain began adding lunch and dinner items in the 1970s, matching offerings by similar American diner restaurants. IHOP has more than 1,800 locations around the world including in Latin America and Southeast Asia.

What do you think the new name will be? Tell us in the comments!

You Still Have Time for The Cheesecake Factory Lunch Special. But, Hurry!