The pancakes are paired with milk-flavored mousse, vanilla sauce, and cinnamon spreads.

It’s National Breakfast Week, so naturally, IHOP couldn’t let it go by without offering up a cool promotion. This time they’re celebrating with a remix of your favorite breakfast cereals. From now through April 12, you can get pancakes and milkshakes made with Fruity Lucky Charms, Cap’n Crunch Crunch Berries, and Cinnamon Toast Crunch cereals. Each menu item includes cereal along with brightly colored drizzles and whipped cream. Kids can also get smaller versions of the pancake compilations on the kids’ menu.

The cereal pancake creations are meant to inspire nostalgia for your favorite cereals by combining them with another breakfast staple.

“Shortly after our test kitchen chefs first began playing with the idea of Cereal Pancakes, we served them to our guests in focus groups and one of the main things they told us was that it made them feel nostalgic for those Saturday mornings watching cartoons and eating cereal when they were kids,” said Brad Haley, Chief Marketing Officer at IHOP. 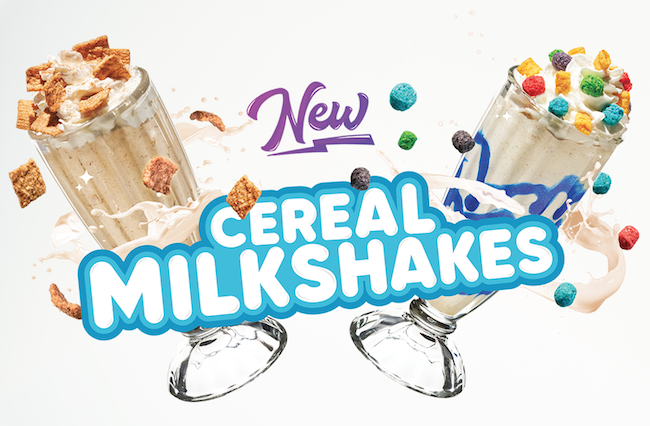 In addition to the cereal topping, the pancakes are dressed with cream cheese frostings, cinnamon spread, cereal milk mousse, and vanilla sauce. The Fruity Lucky Charms pancakes feature a dark purple dollop of whipped cream. The Cinnamon Toast Crunch and Cap’n Crunch milkshakes are made with real vanilla ice cream, cereal, and dark blue “sparkle sauce,” and the kids' combos include one Lucky Charms or Cap’n Crunch Crunch Berries pancake with scrambled egg, bacon, and pork. The cereal pancakes are available under the "kids eat free" promotion that runs every day from 4 to 10 p.m.