KFC Seeks to Compete in the 'Chicken Sandwich Wars'

KFC Seeks to Compete in the 'Chicken Sandwich Wars'

The new sandwich is KFC's version of the bougie chicken sandwich.

The chicken sandwich finally became the hottest ticket in fast food town when Popeyes introduced its gourmet version in 2019. The souped-up sandwich sold out in minutes and led to fights and price gouging on the internet. After seeing how successful Popeyes was, other fast-food restaurants began launching their own chicken sandwiches. Wendy’s launched one last year, McDonald’s is adding three to the menu in February, Shake Shack has since dropped a Korean-inspired menu to compete, and now KFC is getting in on the action.

Beginning in January, fans can head to KFC for a sandwich that is billed to be “its best chicken sandwich ever."

The new KFC sandwich is made with a brioche bun, a quarter-pound Extra Crispy chicken fillet, and topped with extra thick pickles and the choice of regular or spicy mayo. The new sandwich went through an intensive development process that included sampling buns from six different bakeries and pickles in eight different thicknesses.

"We tested the new KFC Chicken Sandwich in Orlando last spring, and we nearly doubled our sales expectations, so we knew that we had a winner," said Andrea Zahumensky, chief marketing officer, KFC U.S. "Many customers hadn't considered KFC as a part of the chicken sandwich conversation, but anyone who tastes this sandwich will know, without a doubt, that we're playing to win.” 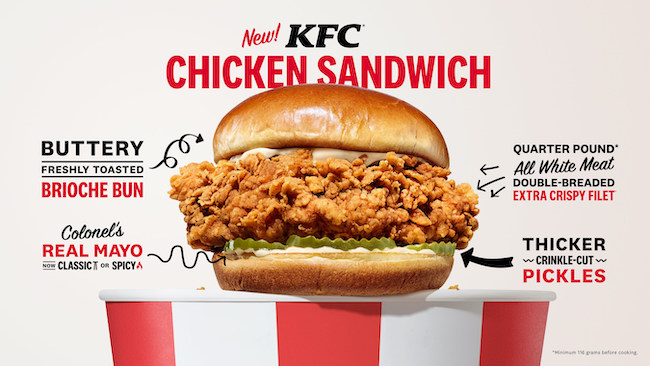 To make sure customers don’t wind up empty-handed when they go to get a sandwich, the company has created a site that will tell you when it’s available at your local store. Just go to KFC.com/findthesandwich to see locations or sign up to notified by email when it gets to your store.

Are you gonna try the new chicken sandwich from KFC? Share your thoughts in the comments below.