A vampire, a monster, and a werewolf walk into a doughnut shop ...

Let's face it: Halloween in 2020 isn't going to be like years past, but if there's anything we can depend on, it's the sweets. Krispy Kreme is bringing all the treats (and no tricks) this Halloween with a trio of seasonal doughnuts that will have you doing the "Monster Mash" with one bite!

Meet the "Scary-Sweet Monster Doughnuts," a delightfully-spooky gang featuring Frankenstein's monster, a vampire, and a werewolf. Frank is none other than Frankenstein's monster, a green-frosted doughnut stuffed with original cream and pretzel bolts against the sides of his head. Drake, who's Dracula-inspired, has a blood-red raspberry filling and sports a purple-frosted face, complete with fangs and a widow's peak. Finally there's Wolfie, who has a sugar-encrusted snarl with cinnamon cereal ears and a fluffy coat of chocolate frosting. This one's easily the most ferocious of the bunch, so watch out! 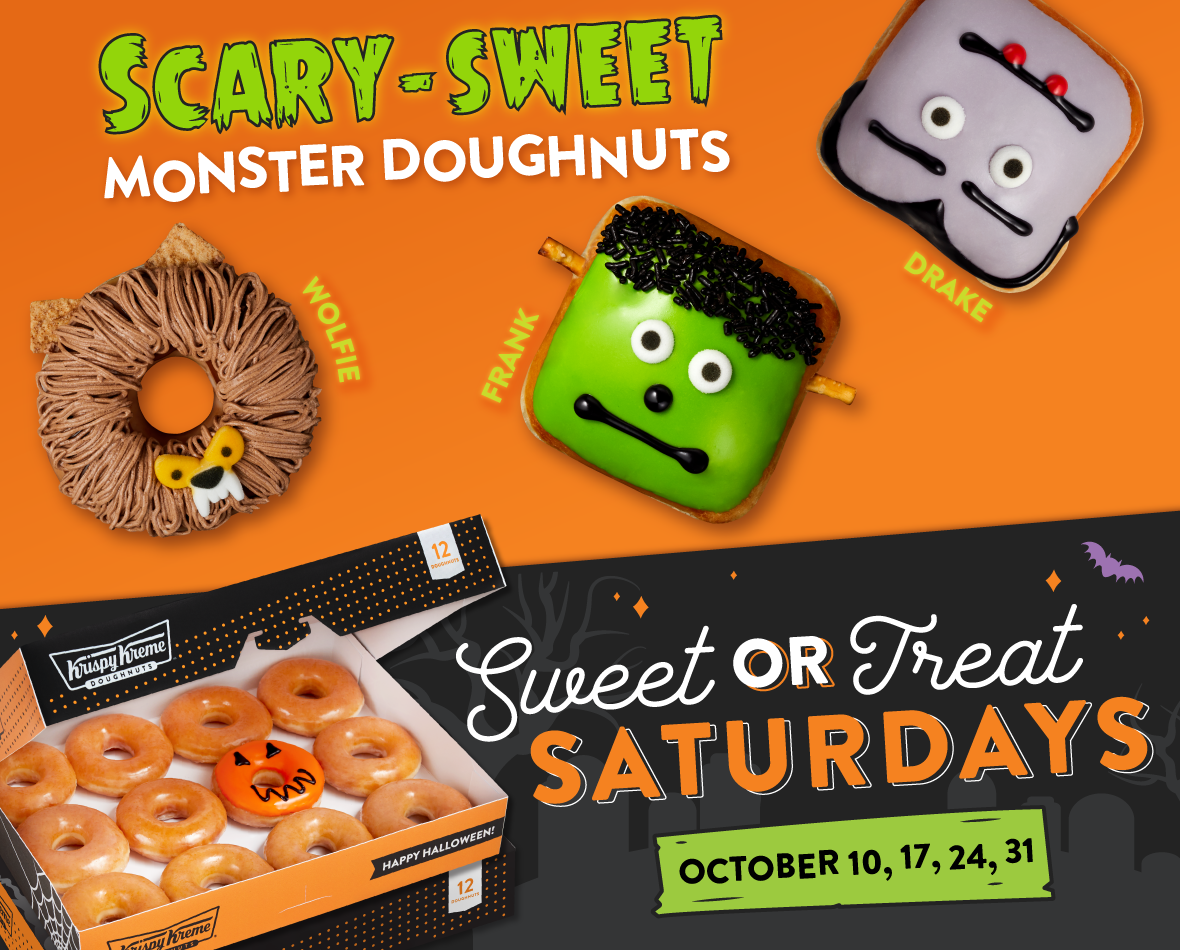 The doughnut chain is also rolling out a deal for the month of October that's so good it's scary. Called "Sweet or Treat Saturdays," customers can snag a dozen doughnuts for just $1 when they purchase another dozen doughnuts. The deal begins October 10 and runs each Saturday with the promo code "SweetOrTreat." The idea behind it is to share the extra bounty with family, friends, or anyone who's in need of a delicious doughnut.

"This Halloween, we're trading scary for sweet and helping fans create new ways to safely enjoy this season," said chief marketing officer Dave Skena in a statement. "Instead of asking for sweet treats, let's give them away to all the neighbors, family, and friends we appreciate so much. It's not a normal Halloween, but that doesn't mean we can't make it a sweet one."

Customers can also score free doughnuts by coming into the store on Halloween, with one simple catch: dressing up! If your witch or superhero costume is gathering dust in the closet, now's your chance to break it out and get in the spirit. We could all use some of that these days!

These devilish goodies hit stores on October 5, so get them while they're hot!

Will you be indulging in Krispy Kreme's Halloween doughnuts? Let us know in the comments!