The next time you reach for a package of Land O’ Lakes butter, you may notice something different.

Land O’ Lakes is celebrating its 100th anniversary by introducing a new packaging design. The century-old Minnesota company has been producing butter, margarine, eggs, and other dairy products with the image of a Native American woman on its packages since 1928. Now the company wants to emphasize the farmers and co-op members behind the brand by removing the woman and replacing it with photos of those members. The new packaging will roll out slowly through the end of the year.

The sales of milk, eggs, and butter have exploded during the coronavirus crisis. The majority of American households have been preparing meals at home and baking bread, cakes, and more. But even with the increasing demand in grocery stores, the industry has been crippled by a loss of revenue from restaurants, coffee shops, and commercial food service. Instead of dumping milk down the drain, dairy farmers have been looking for ways to get their extra milk to food banks. 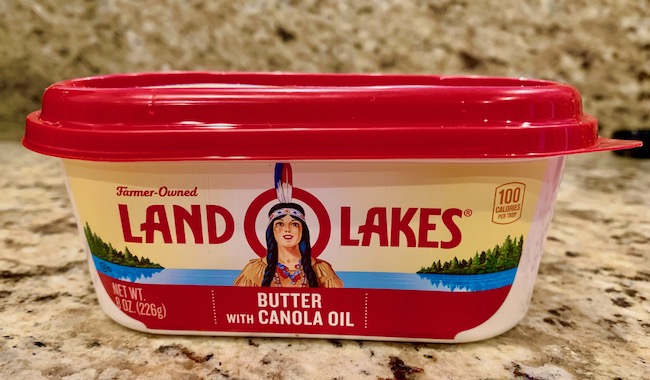 By removing the native American woman named “Mia,” Land O’ Lakes seeks to promote the individual farmers that produce the products sold by the company.

“As a farmer-owned co-op, we strongly feel the need to better connect the men and women who grow our food with those who consume it,” Ford said. “Our farmer-to-fork structure gives us a unique ability to bridge this divide.”

The new design is similar to the old one, featuring a tree-sheltered lake, a geographical feature found in Minnesota. Select packaging will feature images of farmers and their families standing shoulder to shoulder. There has been a concerted effort over the past few years to remove images of Native Americans from advertising and marketing in an effort to be culturally sensitive.

A Fearless Trader Joe's Product Review: 'These Sprinkles Walk Into a Sandwich Cookie'