Ice cream, cereal, and Candy Land are all getting the Lucky Charms treatment in March.

Valentine’s Day is over and the Easter candy is already hitting store shelves. Between these two candy-laden holidays is another fun holiday, St. Patrick’s Day. The holiday was first celebrated in 1601 and has become a fun holiday for everyone, even if you’re not Irish. Last year the big parade in New York City was the first major event canceled due to the coronavirus. With celebrations likely being scaled back this year, General Mills and Lucky Charms has created a limited-edition cereal, ice cream treats, and a Lucky Charms version of Candy Land.

Invented in 1961, Lucky Charms became famous for its singing leprechaun mascot and festive marshmallows. The cereal has been shared by generations and has added new marshmallow and flavor varieties through the years.

“For generations, Lucky Charms has been synonymous with wonderment and fun, and this year we’re adding even more colorful magic for a special St. Patrick’s Day,” said Mindy Murray, senior brand experience manager for Lucky Charms. “We’re excited to bring many ways to celebrate at home with such great collaborators in Hasbro, Cold Stone Creamery, JibJab, and Crocs Jibbitz charms to help parents create magical memories with their children.”

The special edition Candy Land game is called “Lucky’s CharmWorld” and takes players on a chase to catch the leprechaun.  It features charm cards with special powers, leprechaun traps, and a pot of charms at the end of the rainbow. The game is priced at $15.99 and can be purchased at shop.luckycharms.com. 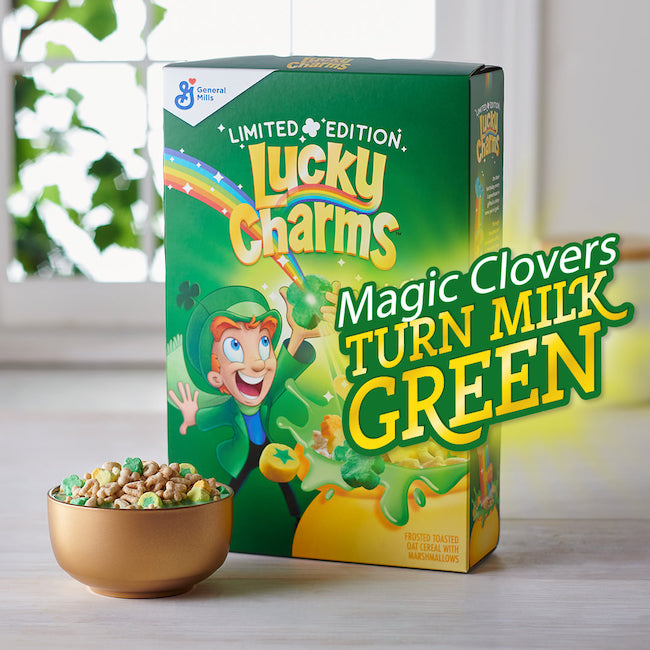 On the food front, Lucky Charms will be available in a limited edition version that will turn the cereal milk green. The green milk Lucky Charms are available in regular and chocolate and are on store shelves now. Beginning March 1, 2021, visit Cold Stone Creamery and get Lucky Charms ice cream or a Lucky Charms shake. Both treats are filled with Lucky Charms marshmallows and topped with gold glitter.

Crocs will also be introducing Lucky Charms “jibbitz” that can be attached to its shoes. Fans will also be able to create a free animated Jib Jab card featuring family and friends.

Do you consider any of these items to be the luck of the Irish (even if you're not Irish)? If so, let us know in the comments which item is your pot 'o gold.