The marshmallows will be available in special-edition pouches, for a limited time.

If you’re one of those people who loves to pick the marshmallows out of your Lucky Charms, you’re in luck. General Mills is bringing marshmallow only pouches to your local grocery store. The company has offered special marshmallow packs before, but they were only available to winners of a social media promotion. The new Just Magical Marshmallows packs are available now at select stores and will expand to more locations in September. In celebration of the new product, Lucky Charms will surprise fans in California and New York later this month.

On store shelves for more than 50 years, Lucky Charms cereal is known for its sweet marshmallow shapes made to resemble charms from a charm bracelet. Originally it only had four shapes—hearts, moons, stars, and clovers. Today’s version has eight shapes, including a rainbow and a unicorn. Last year’s contest to win a box of just marshmallows was so popular the company decided to bring it back on a larger scale.

“Lucky Charms is the only magical marshmallow cereal, and I’m so excited to see that families across the country helped bring the magic back,” said Mindy Murray, senior brand experience manager for Lucky Charms. “To thank our fans for helping us restore this magic, we’re celebrating the launch of the Just Magical Marshmallows with a spectacle that embodies the magic of Lucky Charms.” 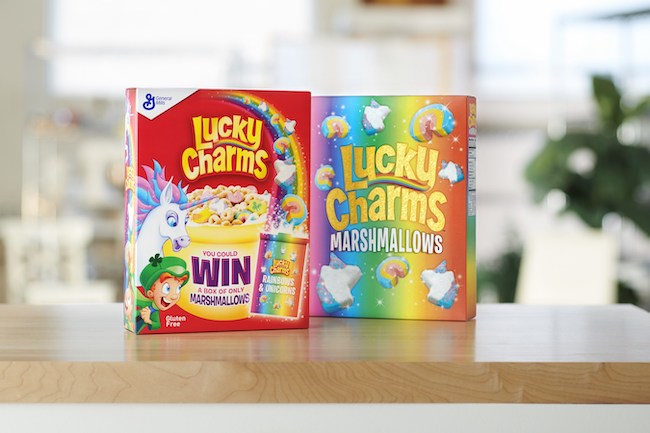 Lucky Charms Just Magical Marshmallows will be available in a six-ounce pouch and priced at $3.99. General Mills has given instructions to fans to “keep your eyes on the sky” for a magical surprise on August 31 in Hollywood and Huntington Beach, and September 1 in New York. Not in the L.A. area or New York? Stalk Instagram and Twitter to see what pops up!

Taco Bell Is Bringing Back Potatoes, and It's a 2021 Miracle

Popeyes Is Now Selling Chocolate Beignets, and a Hoodie to Match