Pepsi and PEEPS Just Made a Marshmallow Soda

Pepsi and PEEPS Just Made a Marshmallow Soda

The marshmallow flavored soda is a limited edition product available only this spring.

If you love Pepsi and PEEPS, you’re going to love this spring collab. Pepsi has taken America’s favorite marshmallow chick and morphed it into a marshmallow-flavored soda. Yep, it's a thing.

PEPSI x PEEPS will be available in specially designed mini-cans in the same colors as PEEPS chicks and bunnies. The cans are even packaged in a cellophane wrapper just like PEEPS candy.

Now for the bad news ... PEPSI x PEEPS will not be sold in stores, instead, fans will have to vie for their chance to win a three-pack by entering a contest on social media. 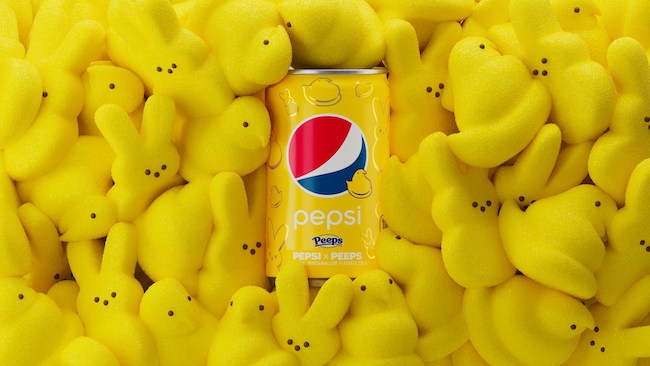 For your chance to win a three-pack of limited-edition soda, take a picture with your favorite PEEPS product and post the image on Instagram or Twitter with the tags @PEPSI, #HangingWithMyPEEPS, and #PepsiSweepstakes. Ten people will get a grand prize pack that includes PEEPS x Pepsi and PEEPS marshmallow treats. The #HangingWithMyPEEPS Sweepstakes begins March 25 through March 31, 2021.

Just Born was unable to produce PEEPS products in the fall and winter due to the pandemic, and has come out strong in 2021.

"After what has been a very difficult year, many consumers are looking for new things to smile about. So, to celebrate the start of springtime, Pepsi collaborated with PEEPS to develop a limited batch of its first-ever marshmallow cola. The PEPSI x PEEPS collaboration will be available in three bright colors through a distinctive mini-can design and will most certainly have fans buzzing all season long," said Todd Kaplan, VP Marketing for Pepsi. "We know our consumers love our limited product drops, and we believe that PEPSI x PEEPS will deliver an iconic and delicious pairing that has the potential to become a fan favorite."

In addition to the contest, Pepsi has created visual dioramas that feature PEEPS in classic Pepsi advertising campaigns, including the iconic commercial of Cindy Crawford drinking a Pepsi outside a dusty gas station.

What do you think of this new PEEPS product and giveaway? Let us know in the comments if you're going to enter.