We've All Been Seriously Sleeping on Thai Food

We've All Been Seriously Sleeping on Thai Food

These flavors aren't for the faint of heart ...

When people think "foreign" food in America, they usually think of a couple of basic staples: Chinese, Italian, French, and Americanized Mexican (or Tex-Mex). As it turns out, there's another form of international cuisine that's been steadily gaining popularity for its bold spices and intense flavors.

If your first question is "how is this different from Chinese food", then you're not alone. Asian cooking still has a lot of misconceptions and mysticism in western dining. Although a discerning person wouldn't have much of a problem telling Japanese sushi apart from Indian curry, many Americans haven't had a chance to learn the differences by experiencing these amazing flavors for themselves.

Seriously. Look at that and tell us that it doesn't look absolutely mouth-watering. 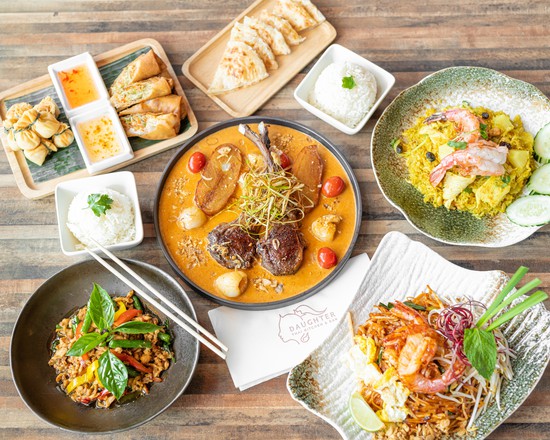 What sets Thai food apart from most other forms of cooking is the sheer intensity of its flavors. This can manifest in pure spice levels or through a complex party of numerous pronounced flavors. For example, the Kaho Pad Nam Prik Norak literally translates to "fried rice with chili paste from hell." You don't need to get too creative to imagine what happens to unprepared mouths when they eat it. On the more common side, Thai cooking makes use of a variety of different spices to create dishes that are at once sweet, savory, spicy, salty, and smooth.

What really sets Thai food into a league of its own is its use of curry. Thai curry is pretty different from milder Japanese or richer Indian curry because it incorporates a wide range of different spices. These curries often start with a coconut milk base before adding curry pastes made out of ingredients like red chili, garlic, lemongrass, lime, and world-renowned bird's eye chilis. If you've never had a Thai bird's eye chili, you're missing out: it's practically little pinata full of a strong spicey kick and a subtle, almost sweet, burn.

Even if you've never tried Thai food, you might have heard of Pad Thai, one of the most internationally popular Thai dishes. This dish is conventionally made by stir-frying some rice noodles with egg and bean sprouts in an intensely flavorful sauce. Despite being stir-fried, good Pad Thai isn't oily in the same way that similar dishes may be. It's then tossed with proteins (like chicken or shrimp) before being topped with chives and ground peanuts. If you've never had it before, you won't regret trying it.

Thai food has been making increasing waves in America since diners have started to discover just how awesome it is. Denver's own Daughter Thai restaurant has been generating a lot of buzz in a crowded restaurant scene for having such unique takes on classic Thai flavors. Whether you're just looking to chow down on some noodles or planning your next big date night, give some thought to Thai food in the future.

What are your favorite Thai dishes? Sound off in the comments!