Colorado Casas: You Can Own Your Very Own Ski Area ... in Greeley

Colorado Casas: You Can Own Your Very Own Ski Area ... in Greeley

Sharktooth Ski Area is for sale if you happen to have a cool $1.45 million burning a hole in your pocket.

It's not the slopes of Breck or Vail, but this popular hill was once a beloved winter recreation destination for locals in the '70s and '80s, and now it could be all yours. Sharktooth Ski Area, now known as Sharktooth Retreat, is looking for a new owner.

Sharktooth had the distinction of being the lowest-elevation ski area that ever operated in Colorado. Its base was at 4,600 feet and the summit was 4,750, creating a whopping 150-foot vertical drop, according to ColoradoSkiHistory.com. It boasted a tow, one 1,000-foot ski run, tubing, and ice skating, as well as a snack bar.

"It opened on a small hill outside of Greeley, Colorado and did not have to worry about common ski area problems like avalanches. The area offered night skiing during its operation and dust storms were just as common as snowstorms," relates ColoradoSkiHistory.com.

The ski area was founded by Richard (Dick) Perchlik, and it operated from 1976-1986. Most of the snow that many people learned to ski on was manmade. 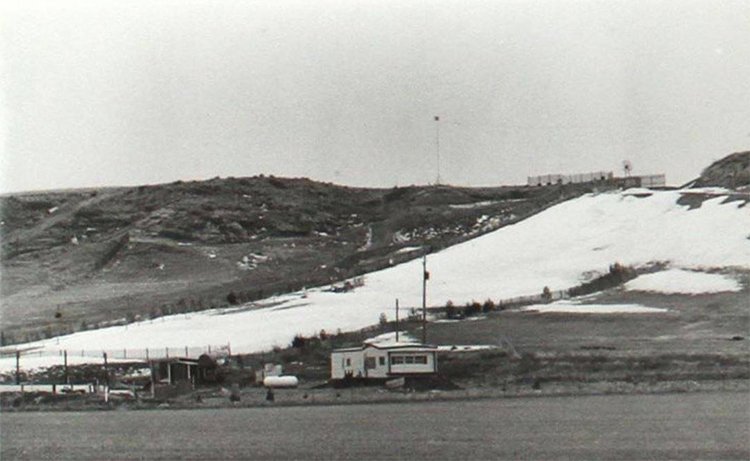 The best ski area on the plains, back in the day. Courtesy of Sharktooth Ski Area (Facebook).

"'We figured there was a need for a place where people could learn to ski or take their kids without driving for hours,' says Dick Perchlik, one of the founders. Indeed there is virtue in a place where adults can ski just minutes away from home or drop their kids for a few hours of fun," says marketing material from Sharktooth's heyday. This material was from the early '80s when a season pass cost $55 for adults/$40 for children, day passes were only $5.50, night skiing was only $2.50, and if you wanted to make a couple of morning runs, you'd have to shell out just $1.50 to ski until noon.

Unfortunately, Dick Perchlik's health began to fail, the snow wasn't falling like it used to, and it became too expensive to operate, so the ski tow took its last skiers to the top and the property went up for sale.

After closing, it passed through several owners. Current owners, Phillip and Karen Erby, bought the property in 1998, but are now looking to downsize.

"What a great place to wake up every morning! We have owned Sharktooth since 1998, but it is time for us to move on. Sharktooth is for sale!" said Karen Erby in a Facebook post.

Today, if you purchase the 18.54-acre property, you'll get two homes, a fully insulated metal outbuilding, a mini-museum of memorabilia from the ski area, an ice skating rink, and a tubing run. You can see all the details in the listing on Zillow. Who knows, maybe you can bring it back to its former glory and bring skiing back to the plains!

Interested in learning more about Sharktooth? Check out the Facebook page that Dave Perchlik, son of the former owners, has dedicated to Sharktooth.

Did you ever ski at Sharktooth? Would you like to see it come back? Leave your comments or memories in the comments below!

You can rent Kevin Costner's mountain retreat in Aspen!