In fact, it’s quite the opposite. Most of us experiment with Pinterest DIYs with high hopes, but usually wind up with a shameful imitation of what the tutorial advertised. I think the platform’s bad rep has now discouraged users from even attempting new recipes—which is a shame because Pinterest actually has some amazing recommendations available, if only one knows where to look (and the limits of what they’re capable of).

Fortunately, you won’t even have to log into your account to track down these rumored recipes! I’ve successfully attempted a few tutorials and some have ended up becoming my favorite go-tos when I’m too lazy to think of something new: Crockpot recipes are my favorite because they always provide portions big enough for a ton of leftovers. When I threw this together, I naively thought I could substitute unsweetened almond milk with the unsweetened vanilla almond milk I already had in my fridge (since I was too lazy to drive to Safeway and spend $6 on a half-gallon of flavorless almond milk). In the end, you could definitely taste a hint of vanilla, but I can’t say I didn’t like it. At the very least, it didn’t ruin the recipe, so that just goes to show that not all mishaps that occur in the cooking process mean you have to start from scratch! I love asparagus, so I’m constantly in search of recipes that incorporate it into the main dish. This one caught my eye because I’d never tried lemon pepper seasoning before. Let me tell ya, I’ll be trying to come up with innovative ways to add it to all of my meals from now on. The smell alone had my mouth watering before the chicken had even fully cooked! An added bonus for those of us with limited free time is how little time it takes to prepare this dish. For once, the estimated time is spot on and the instructions are so easy you’d have to actually put in effort to significantly mess them up! 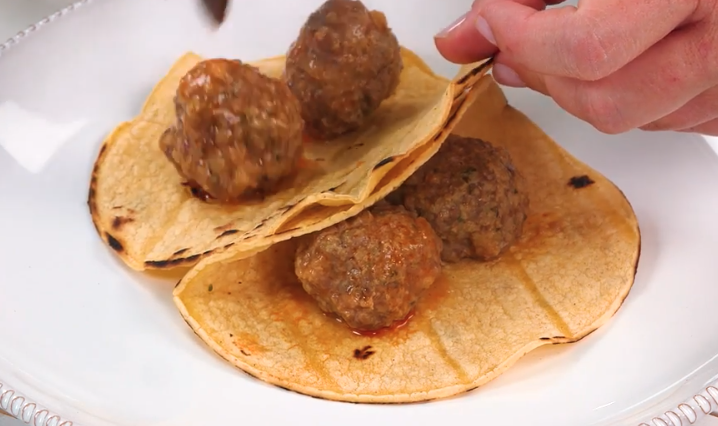 I cannot stress enough how badly you’re going to need napkins when you eat this. If you don’t want the hassle of cleaning up a mess, you may want to turn this into a delicious rice bowl, or pasta sauce. Either way, it’s totally worth the work. The instructions say it takes an hour and 20 minutes to complete, but my first go-around took a little over two hours. Also, note there are a few ingredients in the original recipe that you can substitute without ruining the whole meal. For instance, I used ground turkey, and it tasted just as good as ground chuck. While I used the recommended poblano pepper, others I know who’ve made the dish (seriously, it’s so good I can’t stop telling people to try it) used a can of green chiles as an alternative. Doing this could wind up saving you a few minutes because the poblano pepper takes a bit longer than the instructions claim. The meatballs also took longer to fully bake, although this could be due to my own preference for more well-done food. I tend to shy away from soup for dinner, because I rarely find it filling enough to keep me from overindulging at midnight, but this corn chowder had the button on my jeans about to burst (in a good way)! In fact, simply talking about it has me thinking I’ll make another batch for myself tonight! Definitely save this one for one of those cooler days, though. It's warm, cozy comfort food. I’ve recently discovered that, like pepper, mustard is a truly underappreciated condiment. And it’s not just for hot dogs and soft pretzels! At first glance, one ordinarily wouldn’t think of mustard as the pièce de résistance for a classy meal. However, after experimenting with this recipe, I made a mental note to use more dijon the next time I prepared this dish; and I had already used twice the amount recommended in the instructions! Also, I would go ahead and skip the lemon slices. It makes for a sophisticated presentation, but (for me at least) I found the sharp flavor overpowered the taste of everything else, especially when I went back and reheated leftovers.

What’s your go-to Pinterest recipe? Let us know in the comments!