Tired of pho? Your ramen game getting a little stale? Try making some curry noodle soup to ward off the cold.

"Khao poon" is a traditional noodle dish from Laos that features a rich, creamy broth similar to Malaysian laksa. Like pho, you can customize it with lots of fresh herbs and vegetables, and the best part is, it's easy to make. I simplified the recipe a bit, but it's good enough that even my mom would like it.

For the soup broth:

In a large pot, over medium heat, bring the chicken to a boil with 10 cups of water. Crush the galangal or ginger with the back of a chef's knife and drop it into the pot. Do the same to the lemongrass. Simmer the chicken uncovered for an hour, skimming occasionally. Remove from the heat, let the chicken cool, and reserve the broth. Using two forks, shred the chicken meat off the bone and set aside.

In a second large pot or wok, heat the oil over medium-high for about 30 seconds. Add the curry paste and gently stir until it smells very fragrant or makes you sneeze profusely. Add the shredded chicken, oyster sauce, and coconut milk, stirring continuously until well combined. Add the chicken broth and simmer for at least 20 minutes. Season to taste with salt.

Use Japanese somen noodles that come in little bundles in a flat pack. Bring about 4" of water in a pot to a hard boil on high. Drop in a few bundles (remove the paper band first), lower the heat to medium and stir vigorously to keep the noodles separate. When they come back to a boil, add a cup of cold water and keep stirring. When they come to a second boil, remove them from the heat. Slowly pour off the hot water and fill the pot with cold water. Pull hanks of the noodles out with one finger bent like a hook and wind them around two fingers to make a hockey-puck shaped noodle bundle. Squeeze gently to remove excess water and lay the bundle on a plate. Keep at it until you've wound up all the noodles.

To assemble the dish:

In a large soup bowl, start with 2-3 bundles of noodles. Top with about 1/4 cup each of the carrot, cabbage, and green beans. Sprinkle on some cilantro and squeeze on some lime. Ladle on enough broth to cover the whole thing, mix well, and enjoy. Some people may want to add chili sauce for spice, fish sauce for saltiness, and umami. 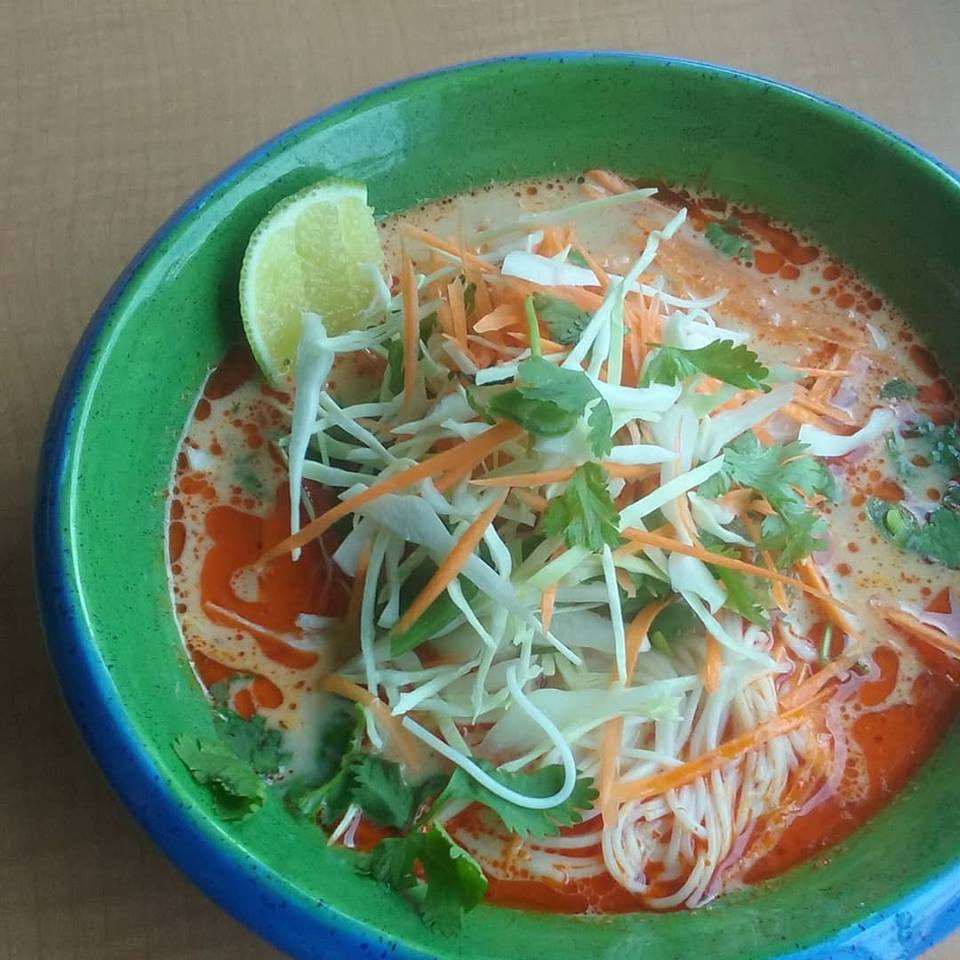 The soup broth freezes well. Portion it out into 2-cup containers and have it on hand for your next craving. Experiment with the recipe -- more red curry paste will make it spicier but a bit bitter. If you don't have time to simmer the chicken, use a plain rotisserie chicken and some store-bought chicken broth. Cooking it from scratch has the added bonus of filling your house with gorgeous chicken-soup smell, though, so try the recipe as written if you can.

Have you had khao poon before? Did you try making this recipe? Let us know and post pictures in the comments below!

Ever had soup dumplings? Here's where to find them in the DMV.