After extensive research, chemists have cooked up the perfect formula in the lab.

Chemists from the Royal Society of Chemistry and cheese experts from the British Cheese Board teamed up to conduct scientific research on the best way to melt cheese on toast. (No, we aren’t making this up.)

Like any other scientific experiment, the chemists carried out several tests changing one variable at a time in order to come up with the perfect formula. According to the Science Executive, Ruth Neale, they tested three different components: “consistency of the temperature of the melted cheese across the slice, the texture of the cheese, and the taste.” The chemists focused on the temperature and scientific documentation working alongside the Secretary of the British Cheese Board, Nigel White, who judged the texture of the cheese and the taste.

Here is the final formula the Chemists created to perfectly melt cheese on toast: 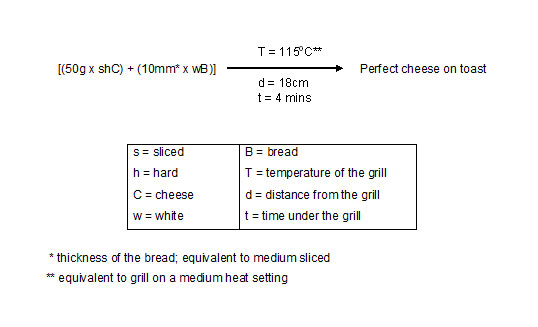 Courtesy of the Royal Society of Chemistry

Okay, after reading that formula, you probably had one of two reactions—either you nerded-out about the scientific method, or your eyes glazed over and your brain shut down. If you didn’t ace your high school chemistry class, don’t worry! We’ll explain what the formula actually means without the scientific jargon:

"We found that the perfect slice can be made by melting 50 grams of sliced hard cheese, such as cheddar, on a slice of white bread, 10mm thick, under the grill. The cheese on toast should sit at a distance of 18cm from the heat source—which in our grill was at a temperature of 115 degrees Celsius—and needs to cook for four minutes to achieve the perfect consistency and taste." —Ruth Neale

For those of us who aren't chemists using the metric system, that means use about 1.75 ounces of sliced hard cheese on white bread that's about .4 inches thick. Make sure the heat source is heated to 239 degrees Fahrenheit and is kept about 7 inches away from the cheese toast.

We're almost certain this might be a publicity stunt to get us interested in studying science, but who cares! It got us talking about a few of our favorite things—carbs and cheese! What's your favorite type of cheese to melt on toast? Let us know in the comments below.