6 Best Spots to Grab a Cinnamon Roll in Maryland

6 Best Spots to Grab a Cinnamon Roll in Maryland

Whether you're craving a quick breakfast or indulgent brunch, these buns are sure to sweeten your day!

Cinnamon rolls are always a welcome sight at the breakfast table. With their fluffy texture and gooey, sugary interior, we find them impossible not to devour in one sitting especially when they're fresh out of the oven. And if you live in Maryland, you'll find plenty of places to indulge. Check out these 6 spots in Maryland for delicious cinnamon rolls.

Highly rated and reviewed on Yelp, Blue Moon Cafe puts a playful spin on breakfast, achieving fame with the Guy Fieri-approved Captain Crunch French Toast. But customers also swear by the cinnamon rolls, AKA the "Sin Roll." At under $5 each, these doughy pastries live up to their name with ample amounts of cinnamon, sugar, and glaze. They're also enormous. Diners recommend splitting one for the table or getting it to-go unless you have the stomach to eat it all in one sitting.

If this is a list about cinnamon rolls, then a place with "bun" in the name is sure to be a winner! The Bun Shop specializes in sweet and savory-filled buns, including the classic cinnamon roll. But there's a twist–instead of cinnamon and sugar, it's swirled with chocolate ganache and espresso. It's called the Dirtiboy and is very much reminiscent of babka. We'd pair it with black coffee for a simple pick-me-up, especially on cold fall mornings.

In addition to fresh-fried donuts, Carlson's also makes a delicious cinnamon roll. One reviewer called it "life-changing" and judging by the line at the door each morning, we're apt to agree. They're only open from 5 a.m. to 11:30 a.m. so if you're craving sticky bun bliss, we'd get there bright and early. Make sure to have cash on you too, as they don't take credit or debit. 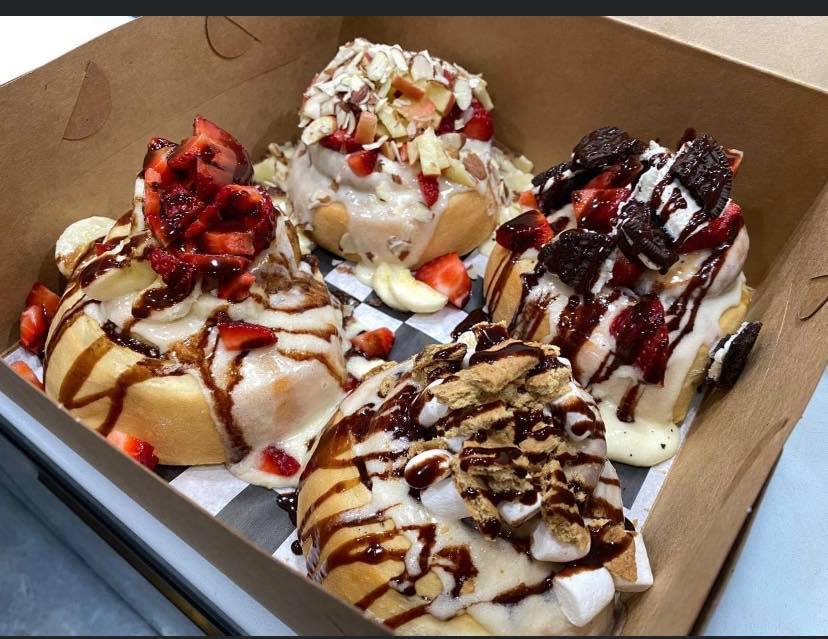 What's your dream cinnamon roll? This chain has taken the cinnamon roll to new heights by letting you build your own! Customers can concoct custom sticky buns with a variety of icings and toppings at their disposal. Among the 20+ flavors are cream cheese, caramel, orange, peanut butter, and lemon, with toppings like edible cookie dough and pretzels. If making one seems overwhelming, you can try one of their signature varieties like the Old Skool Roll and Caramel Apple Pie. They're best-sellers for a reason!

Craving a Cinnamon Roll As Big As Ya Head? Ted's Bulletin offers one–literally. Along with their extensive breakfast menu and decadent desserts, they serve gigantic cinnamon rolls that really are as big as your head. They're warm, they're gooey, and they're irresistible delicious–all it takes is one bite! They're only served on weekends until they run out, so you'll want to arrive early! And whatever way you cut it, you'll definitely need to use a knife and fork for them.

A rotating menu of cookies, cakes, and pies can be found at Sugar Vault Desserts, but if there's anything you should try it's the cinnamon rolls. Customers have raved about their Pecan Pie Cinnamon Roll, but their other flavors are just as divine: Red Velvet, Peach Cobbler, Banana Pudding, and Oreo. They even make Cinnamon Roll Cupcakes with miniature cinnamon rolls on top! Since everything's baked in small batches, you'll be getting the freshest desserts in town, but that also means they sell out quickly. Keep up by following them on Facebook.

Where do you like to go for cinnamon rolls in Maryland? Are there any places we forgot to include? Share your recommendations in the comments.