Applebee’s is getting in on the game as well.

The current pandemic has definitely put restaurants in a bind. Many have transitioned their businesses to curbside and delivery models, but some find it a little more difficult.

Take Chuck E. Cheese, for instance. The children’s pizza and party restaurant isn’t really a takeout kind of place, and most adults only go there to take their small humans to play hours of video games after two bites of cheese pizza. So the company that owns Chuck E. Cheese, CEC Entertainment, got creative and opened a restaurant within a restaurant called Pasqually’s Pizza and Wings. The jig was up when a delivery customer tipped Reddit users off to her discovery.

The pizza and wings are made in the Chuck E. Cheese kitchens and are supposed to be a more premium product. Pasqually’s is named for one of the members of Chuck E. Cheese’s animatronic band, and sometimes you can even find them next to one another in the delivery apps. If you’re looking for a little more excitement in your pizza and wing order, you can order from Chuck E. Cheese instead. The expanded menu has pretzel bites, pepperoni bites, and treats like unicorn churros, cotton candy, and the traditional Chuck E. Cheese birthday cakes. The Chuck E. Cheese pizza box can also be turned into a bowling alley complete with plastic bowling balls. 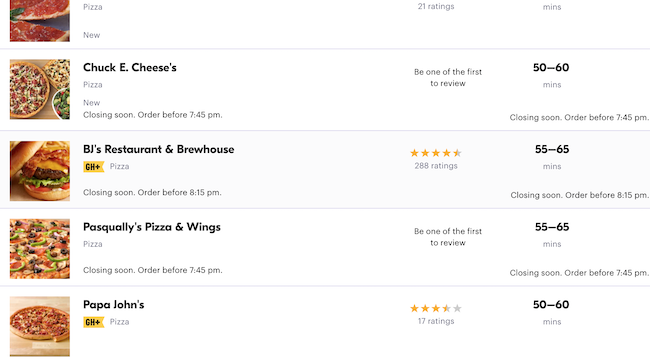 Chuck E. Cheese and Pasqually's are listed in the same delivery app.

Applebee’s is also boosting its delivery game with an offshoot called Neighborhood Wings by Applebee’s. It capitalizes on the popularity of the restaurant’s boneless and bone-in buffalo wings. Customers can choose from eight different wing varieties along with sides like French fries, onion rings, and chips and salsa. Neighborhood Wings doesn’t have a stand-alone website; you can only find them on them GrubHub. Pasqually’s Pizza and Wings has a website that is currently promoting a $12 off $15 orders for GrubHub customers.

What do you think about Chuck E. Cheese selling delivery under a different name? Does it seem deceptive? Or are you fine with it? Tell us in the comments!

Chipotle Rolls Out Cilantro-Lime Cauliflower Rice Across the Country

Take Our Poll: Chipotle vs. Qdoba