Plano Restaurant, Better Than Sex, Stands Up to Its Name

Plano Restaurant, Better Than Sex, Stands Up to Its Name

One Plano mom kicks date night up a notch. Warning, this content may result in pregnancy.

Let’s start out by saying I live in the suburbs, and I know what they’re notorious for: the place where the cool people move to when they are done being cool.

They’ve got the great schools and the big yards, and all the chain restaurants you could want.  Often they have nice parks, libraries, and possibly rec centers. But for date night, your options are often limited to Red Lobster and a movie.

But Plano… is growing.  And I am HERE FOR IT. Because with growth comes a variety of people and a variety of experiences and expectations.

And one of those things that has come to Plano, that was somewhat contentious among the boring people of the ‘burb, is phenomenal.

Better Than Sex - A Dessert Restaurant

“OMG we will have to tell our children what that means!!” - actual quote from a mom on a mom group Facebook page.

Ok, like, here’s my thing - the stork didn’t bring dem kids.  You got them by doing the nasty, so you might as well embrace your sexuality.  It’s legit part of being a mammal.

I’m a recent divorcee.  I have three kids. I thought, “Good God, no man is going to want me.”

I was wrong, friends.

Not only did I have men chasing after me, but I also had to put parameters around who I was willing to talk to (no, if I could have babysat you, you do not get to take me to dinner).

So I dated around for the first time in 15 years, and about five months post-divorce I found a wonderful man who treats me well and doesn’t just see me as a mom.  He sees me as more than “just a mom” and wants to do fun, sexy things with me.

So I suggested we try out the new, salacious dessert and drinks place, Better Than Sex.  It’s a franchise, with the original one being in Key West, FL. They only sell dessert and drinks, and it’s all sex-themed.  Apparently, a couple from Plano visited it once on a vacation, thought it was an amazing concept, and wanted to bring it here.

So, SO glad they did.

Better Than Sex is located in downtown Plano (which if you haven’t been to, you totally should.  It’s adorable and really having a renaissance). When we entered, soft jazz was playing and the only light was provided by candles.  Lovely chandeliers hung all over the ceiling, and the walls were painted in a deep red with patches of brick exposed. The owner was the one to seat us and brought us over to a small, intimate table, that was obscured by a Brocade curtain.  The seats were red velvet and we had a candle lighting our table. Black and white boudoir photos served as the art on the walls.

Our waitress was friendly and gave us the menus which were on iPads so we could easily see in the darkly-lit venue.  She recommended their dipped wines and spirits. I chose Caramel Over Me, which was a sweet Moscato in a caramel-dipped glass.  My partner had the Teabagger, a whiskey mixed drink with crushed up lemon heads on the rim. 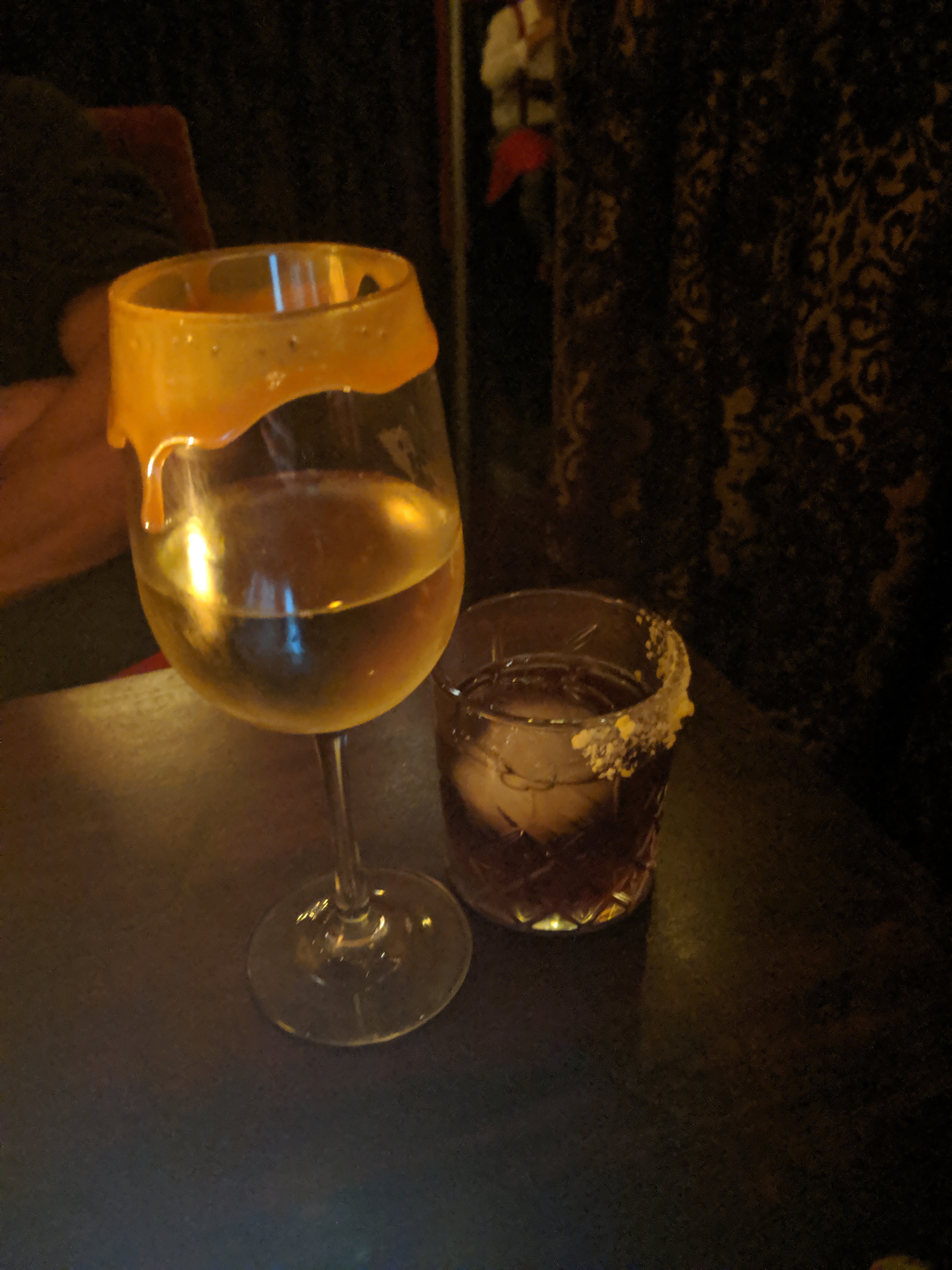 The Caramel Over Me Moscato and The Teabagger 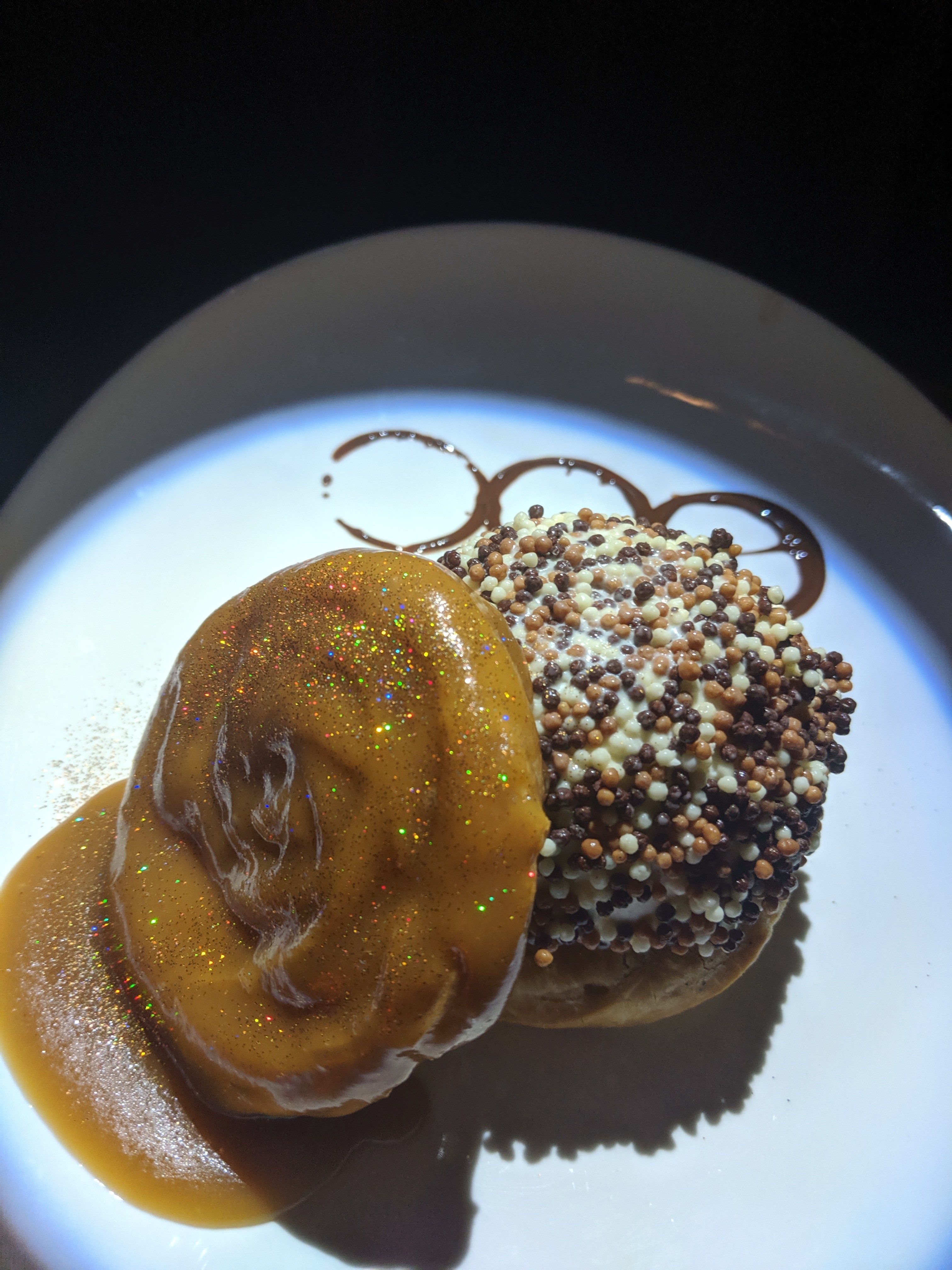 Oh, all that is heavenly, it was like all the best desserts you’ve ever have combined on the two plates.  It gave me such an intense sensation of pleasure, it almost felt like foreplay. We were extra cheesy and fed bites to each other; but then it didn’t feel cheesy, it just felt hot, which I’ll definitely chalk up to both the desserts themselves and the sexy vibe of the atmosphere.

Half-way through the desserts, our waitress asked if we’d like another drink.  Uh, yes, please. I asked her for a suggestion and she said, without missing a beat, “Sex Appeal.”

The sparkling Moscato sat in a white-chocolate glass dipped with red sugar around the rim.  The white chocolate was definitely thicker than the caramel that had been on my first drink, meaning I had to be a little more deliberate with my tongue.

I caught the eye of my partner, who later said that it was a huge turn on to watch me “lick things off of other things.”

He ordered the Love Potion 69 shot, which was a chef-crafted Amaretto in a tiny mason jar, topped with thick whipped cream.

At this point, the desserts were gone, and we were feeling hot under the collar, so we asked for the check and talked about how we couldn’t wait to come back.  The desserts were phenomenal, the drinks were delicious, and all of it was sexy AF. And, it appears they regularly bring out new items on the menu, so there’s always something new to keep it spicy.

So, call a babysitter, put on some Spanx and a little black dress, and take your man out to Better Than Sex.  Because even if your night doesn’t end with great sex, you’ll at least have had some amazing drinks and desserts that practically give you the Big O because they’re just That. Damn. Good.