Shooters Grill in Rifle Refuses to Close Doors Amid COVID-19

Shooters Grill in Rifle Refuses to Close Doors Amid COVID-19

This restaurant is refusing to back down to Garfield County's demands for closure.

Shooters Grill is just like any restaurant that serves traditional American cuisine, except for the waitresses that sport sidearms and the patrons are welcome to come armed. Like all restaurants and small businesses across the nation, it's feeling the pinch caused by the COVID-19 closures. For a restaurant in a rural area that mainly gets its business from locals and tourists, the shutdowns carry a heavier burden than big-city eateries who benefit from larger populations to support their establishments.

On May 9, 2020, Shooters Grill owner Lauren Boebert opened the doors to a limited amount of diners and a significant amount of cleanliness standards, including those encouraged by the CDC. The restaurant was hit with a cease-and-desist order by Garfield County, yet Boebert won't close unless forced.

In response, Boebert opened up shop on the street in front of the restaurant to serve her patrons al fresco. 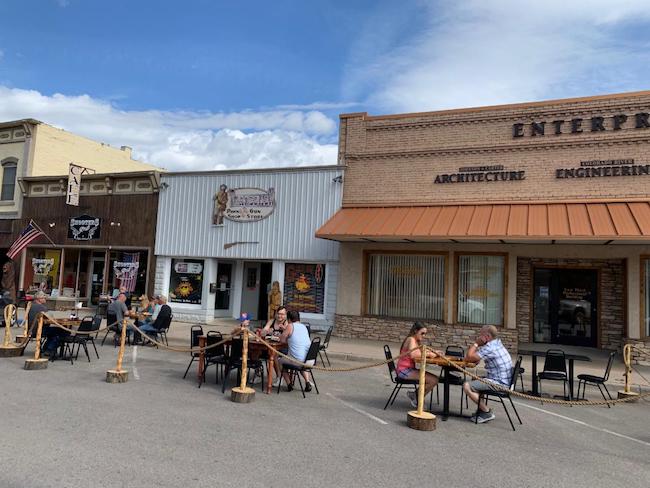 Mrs. Boebert is also running for Colorado's 3rd Congressional District, having announced her congressional run back in December of 2019. In a press release dated May 14, 2020, she stated,

“I've been patient, followed all of the proper channels, and provided service in a safe and responsible manner using the same guidelines as neighboring Mesa County restaurants. When that wasn't good enough for our local officials, they issued a cease and desist. The fact remains that my staff needs their paychecks, so this morning I moved my tables out onto the city street and opened back up for business," she stated.

"...Governor Polis bragged to President Trump about Colorado opening, but the reality is that small business owners like me who don't have Washington, D.C., lobbyists are getting crushed and being treated like criminals while big box stores are open for business. How is it safer to walk the aisles of Wal-Mart than to eat a meal at Shooters Grill? I've tried very hard to be safe, kind, and courteous, but our livelihoods are on the line and we need to take action. I don't have time for highly-paid bureaucrats to make decisions, I need to make payroll."

There has been no shortage of frustrations during this pandemic, and business owners who make strides to keep their establishments clean and reduce customer traffic are struggling far greater than their larger counterparts. The sad reality of these closures is that many businesses in rural areas may not survive past the pandemic. Open or close, business owners can't win either way. 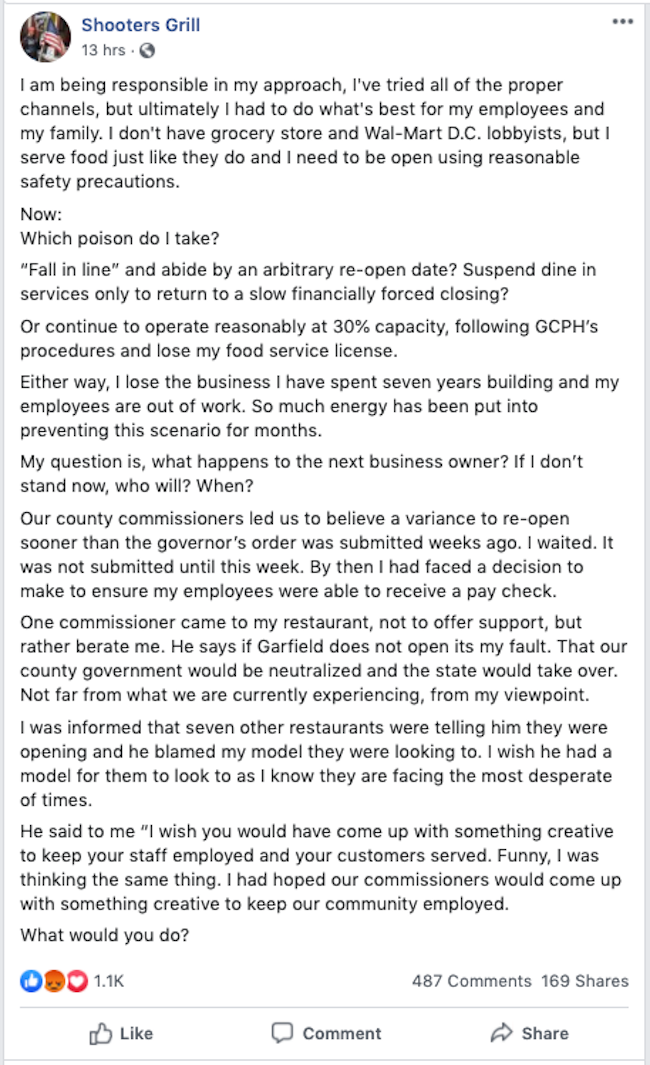