Sly Clyde Ciderworks' goal is to become the largest cider company distributed along the East Coast.

Brothers Doug and Tim Smith named Sly Clyde Ciderworks in honor of their grandfather, H. Clyde Smith, who lived at 207 E. Mellen Street in Hampton, Virginia, until he passed away in 1984. Today, his former home serves as the cidery itself, and this past August marked their first anniversary of a successful year of being the Commonwealth's first coastal cidery. 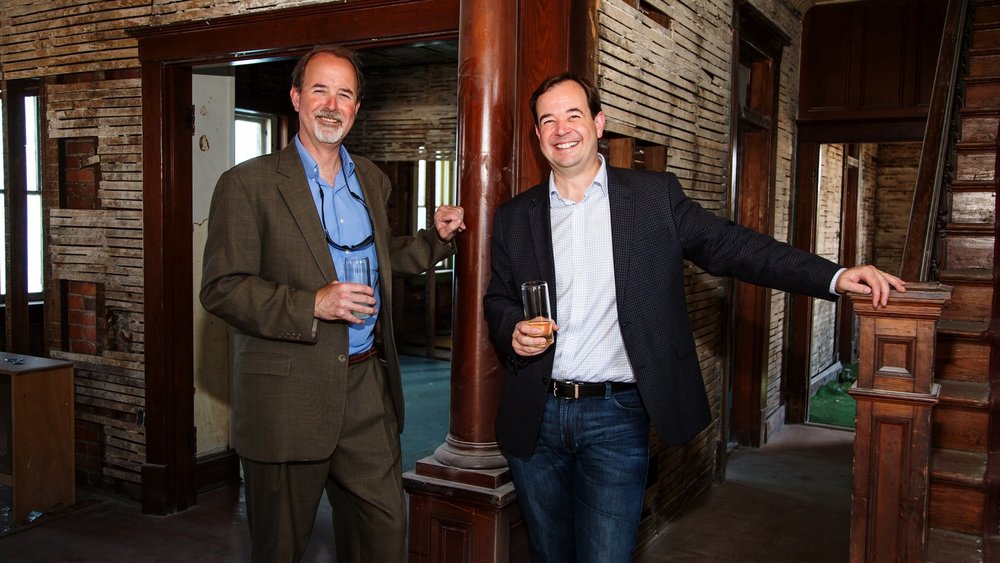 I wanted to learn more about this cidery and its fascinating story. On a beautiful sunny day, I drove to Hampton from Virginia Beach to meet with Amelia Maccubbin, Sly Clyde’s Tap Room Manager and Events Coordinator.

Within minutes of taking Exit 268 off I64, I entered the Historic Phoebus District. It felt like I’d taken a step back in time and had entered a small town. I slowly drove down East Mellen Street, much to the chagrin of the drivers behind me, making my way toward Sly Clyde, trying to take in the sights of a street lined with historic buildings, some dilapidated others restored.

I arrived at the big, beautiful, brick Smith home, which was built in 1910, and marveled at its stately grandeur. Other than the brightly painted antique doors and the large Sly Clyde Ciderworks sign, it still looked like a home and not a business. I soon found out that this homey motif is maintained quite purposefully. 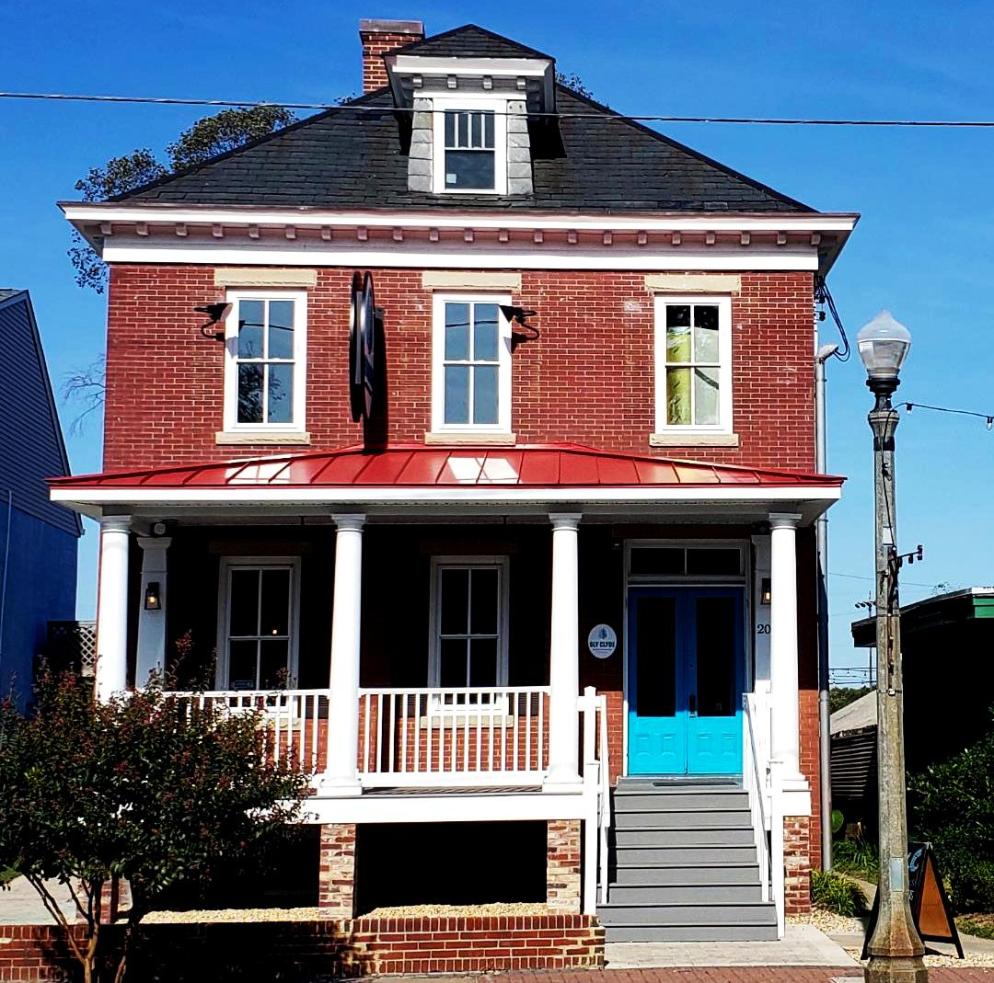 As I walked up the front steps onto the porch, the doors were just being unlocked, and I was warmly greeted by a nice young woman named Jaelyn. She was prepping for what was going to be a busy evening. I didn’t want to disturb her prep work; therefore, I asked if I could just walk around and take some pictures. Wandered around, I took in all of the details—from the gorgeous wood staircase, to the tin ceiling and chandelier in the front room, the many windows offering lots of natural light, and the exposed brick walls. 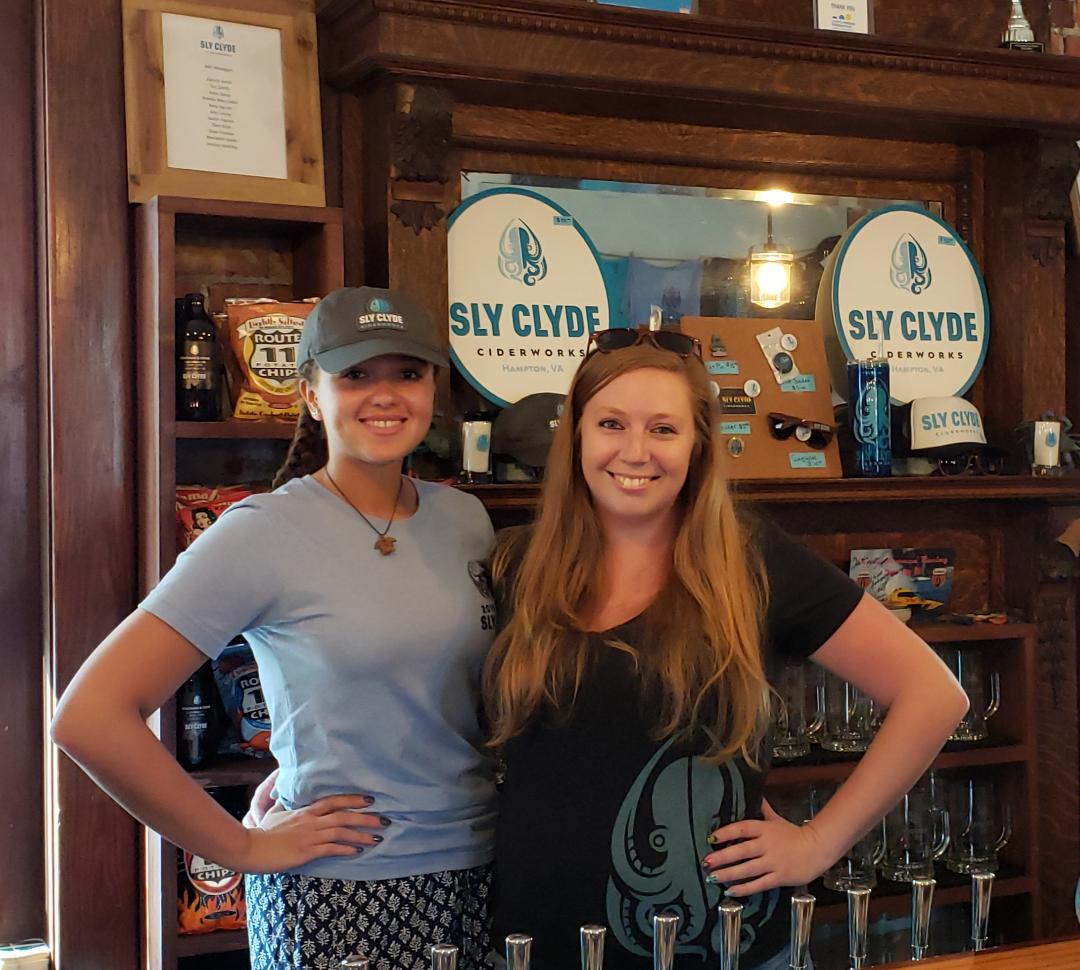 Amelia arrived shortly and was extremely welcoming and happy to take the time to speak with me. I quickly realized this is a very busy woman. We stood at the bar and talked about all things Sly Clyde Ciderworks: the history, the concept of a place where people could gather and laugh, the repurposing of the home, the making of the cider, events she’s planning (and thinking of planning!), and the ultimate goal of Sly Clyde. I could feel her mind coming up with ideas as we were speaking, and her aura was one of passion and love for this company/family. After all, she’s been a part of the team since its inception.

I wanted to know more about the repurposing of the home. In an effort to retain as much of the original structure as possible, the home was painstakingly repurposed. The bar, as well as the long high top table and each of the tables in the front room, are all made from the original wood floors from the upper level. They are trimmed with parts of a beam, the sides are from the original tin ceiling, and the foot bars are heavy copper pipes, which were extracted from the piping. Beautifully-crafted, one-of-a-kind pieces!

The exposed brick walls are the backdrop to the beautiful original banister, tables, and decor. The fireplace was moved from the front room to behind the bar, where it houses the Clyde Club members’ cider mugs. All were functional when it was a home; now all are creatively used charming details.

It took about a year and half to complete the renovation, restoration, and repurposing, but they did a spectacular job of designing an atmosphere of relaxation and comradery.

To the Smith brothers, the most important thing about restoring the family home was giving back to the Phoebus community. Over the last five years or more, the community of Historic Phoebus has been working to restore the town to the thriving marketplace it once was—often referred to as “Little Chicago.” The Smith family's presence in Phoebus dates back to at least the 1870s (if not earlier), and for generations, the family has given back to the community—a trait instilled in the brothers. They felt that restoring the building and starting a business would help lead to better home prices and economic growth for the somewhat abandoned town. Watch here to see the movement of Phoebus, which Sly Clyde is so invested in.

It’s All in a Name: Sly Clyde 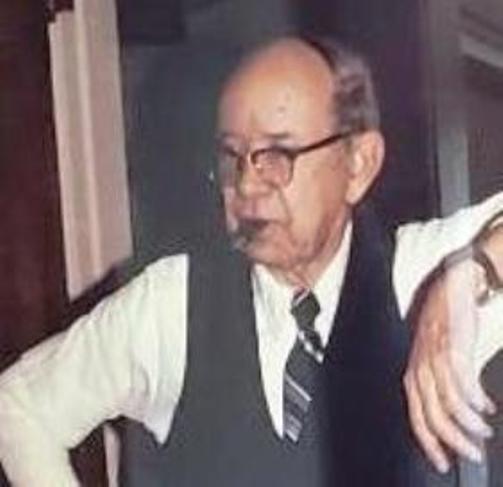 H. Clyde Smith, Tim and Doug’s grandfather, had a calm demeanor and wicked sense of humor that kept them laughing as kids, according to their website.

“He loved a good story and had a sly smile that made you realize that he had a few secrets about life."

"Sly Clyde"—the clever name the brothers chose for their cidery—both honors their grandfather's memory and easily sticks in patrons' minds to keep them coming back again and again.

When you are sipping on a specially crafted Sly Clyde cider, you are enjoying the purest and most flavorful cider. Amelia told me that they are 100 percent committed to using ONLY Virginia apples—that’s it. The end. Hence, their slogan “100% Craftily Crushed Virginia Apples.”

Other cideries are allowed to claim that they serve Virginia apple ciders; however, they are only required to use 40–60 percent Virginia apples to maintain this claim; the remaining percentage can be imported.

She went on to explain that there are never any dyes used to change the color of their ciders. Also, the ciders are gluten-free, and there are no artificial sweeteners used. Invert syrup (a mixture of pure Virginia apple juice and cane sugar, which is boiled to become syrup and added back to the cider) is the sole, pure sweetener.

Patrick Smith, Sly Clyde’s Master Cider Maker, develops different ciders using only the freshest and local ingredients available: herbs, fruits, and vegetables. There is a large fig tree that Mr. Smith planted in the backyard, and sometimes those figs are used in recipes. Patrick is quite gifted as his selections are creative, delicious, diverse, and superb.

I wanted to try some of the ciders. When in Phoebus, right? I perused the chalkboard with their 10 offerings. Amelia said that the offerings are primarily seasonal; however, some are so popular that they run out and have to be replaced. She politely excused herself to help a customer who had ordered a keg of cider for his wedding reception.

The groom was sitting at the bar adjacent to me, enjoying a cider, and I asked what he was drinking. It was the "Inkjet" cider. Done. "I’ll try what he’s having, selection number one."

Previously, Amelia had mentioned that "Winesap" is a cider master’s favorite. Being that I am not master of cider, I took that as a challenge to see if I could drink with the masters. Done, selection number two. The next two Jaelyn and I selected together.

I had my diverse selection of a flight of four 5-oz. tasters. By the way, the wood flights were all handmade by one of the Smith brothers with the logo wood burned in the center. The creativity never ends in this place.

My flight consisted of (descriptions are courtesy of Sly Clyde Ciderworks website):

As I tried each, I made my assessment; each was delicious in its own right and true to their description. My favorite, however, was the Winesap; it was dry and crisp and very pleasing to my palette. I decided to share with the groom, of course, I turned the taster glass. He tried them and was very pleased with his decision of ordering the Inkjet cider.

Of course I had to ask, and I loved his story—and this is why Sly Clyde Ciderworks is a great gathering place. It is one made of sitting comfortably and embarking on interesting conversations with friends or strangers. He told me that when he and his bride’s guests enter the reception venue, at the Women’s Club of Portsmouth, they will be offered a flute of chilled Sly Clyde Inkjet cider. How lovely is that?

Amelia returned with everything the groom would need for the keg, including a stack of signature Sly Clyde coasters and detailed instructions on how to best serve the Inkjet cider on his special day. I thought, what a fantastic idea to think outside the usual flute of sparkling wine or champagne for my next event and serve a Sly Clyde cider instead! 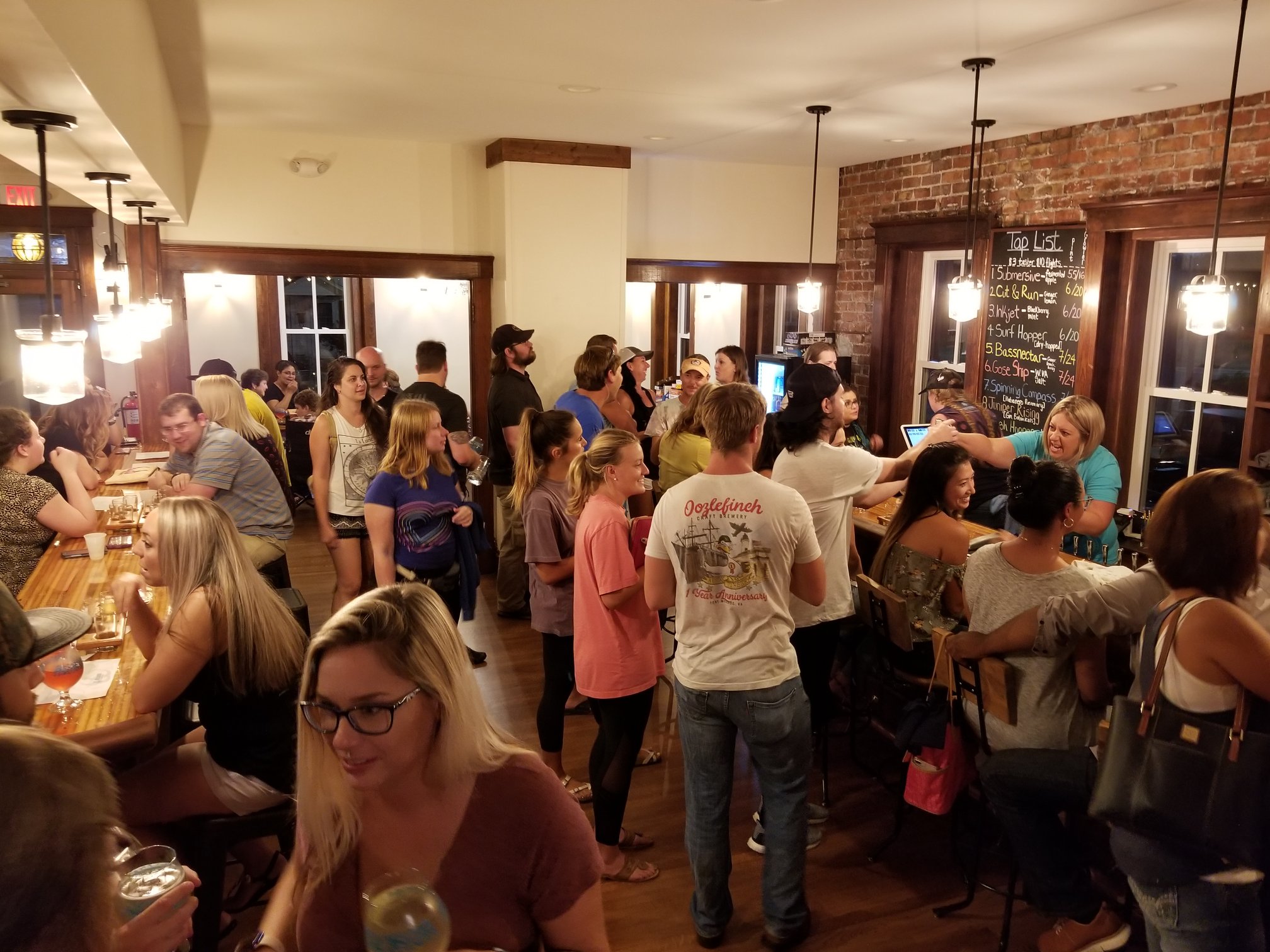 During the week, most patrons are business people and locals. There are the Virginia Beach commuters who stop off when they see a back-up on the bridge and tunnel, so they pop over to Sly Clyde to take a respite from their day and wait out the traffic. After all, it’s only two minutes off the highway! Therefore, there is always a mix of clientele. 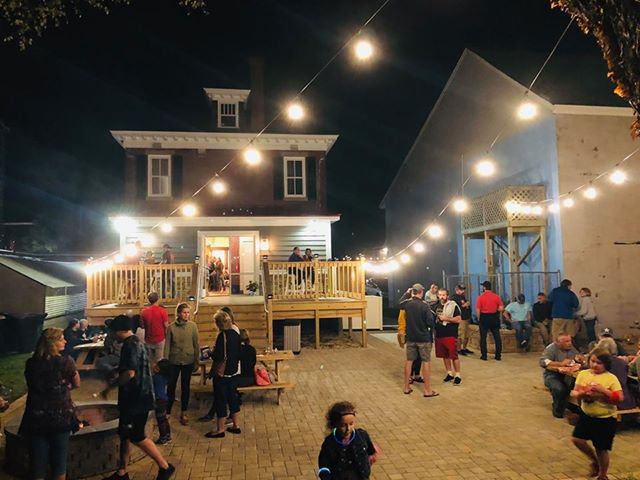 On Friday and Saturday nights, it’s just a party of people of all ages, from noon until close (midnight) in the tap house or in the backyard with the deck, picnic tables, food trucks, and music. Amelia revealed she’d just obtained an outdoor music license/permit, so now they can have their bands and musicians play outdoors on the deck or patio, rather than be sequestered inside. She posts the daily entertainment and food truck on their Facebook page. 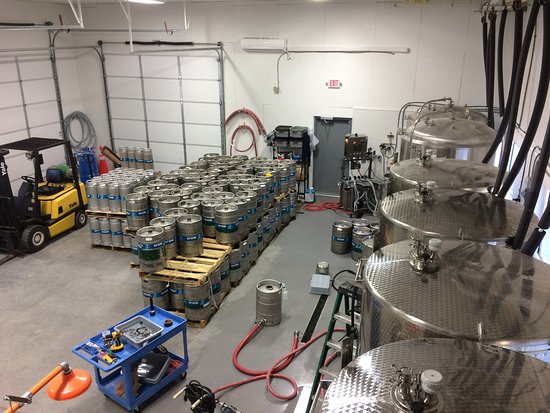 The goal for Sly Clyde is to become the largest cider company distributed along the East Coast. With two major distributors and Sam Haywood, Sly Clyde’s sales rep, they are currently distributed in North Carolina, Virginia Beach, Norfolk, and the Netherlands, YES, the Netherlands!!!! They are heading to D.C. and Northern Virginia. Check out the shelves at Total Wine, Harris Teeter, and other stores and look for that distinctive Sly Clyde beautiful blue octopus logo.

Be sure to attend Sly Clyde’s first Coastal Virginia Cider Fest on Saturday, November 23. It's going to be incredible; they're hosting cideries from all over Virginia with food trucks, live music, local crafters, and more. Click here for the details. Anything Amelia plans is amazing. 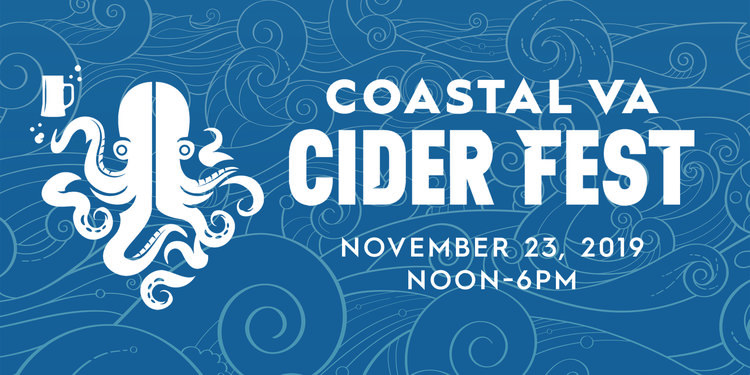 I would definitely recommend you drop by Sly Clyde Ciderworks for a taste of the best cider I’ve ever enjoyed. Let us know what you think when you visit!

What other cideries have you visited? We'd love to hear from you in the comments.

*All photos were taken by Faith Jacobsen unless otherwise noted.