Broncos Mascot 'Bucky' Modeled After One of America's Most Iconic Horses

Broncos Mascot 'Bucky' Modeled After One of America's Most Iconic Horses

No, Bucky isn't out by DIA.

There are a few ways you can impress a Broncos fan—like making your distaste for the Raiders well-known, or admitting that the Barrel Man is your idol. But here's one you may not have thought of—the origin of Bucky the Bronco. If you're not familiar, Bucky is the white horse that's rearing up on top of the scoreboard at Mile High (both old and current), and it's not to be confused with the ominous blue mustang welcoming visitors at DIA (aka Blucifer). 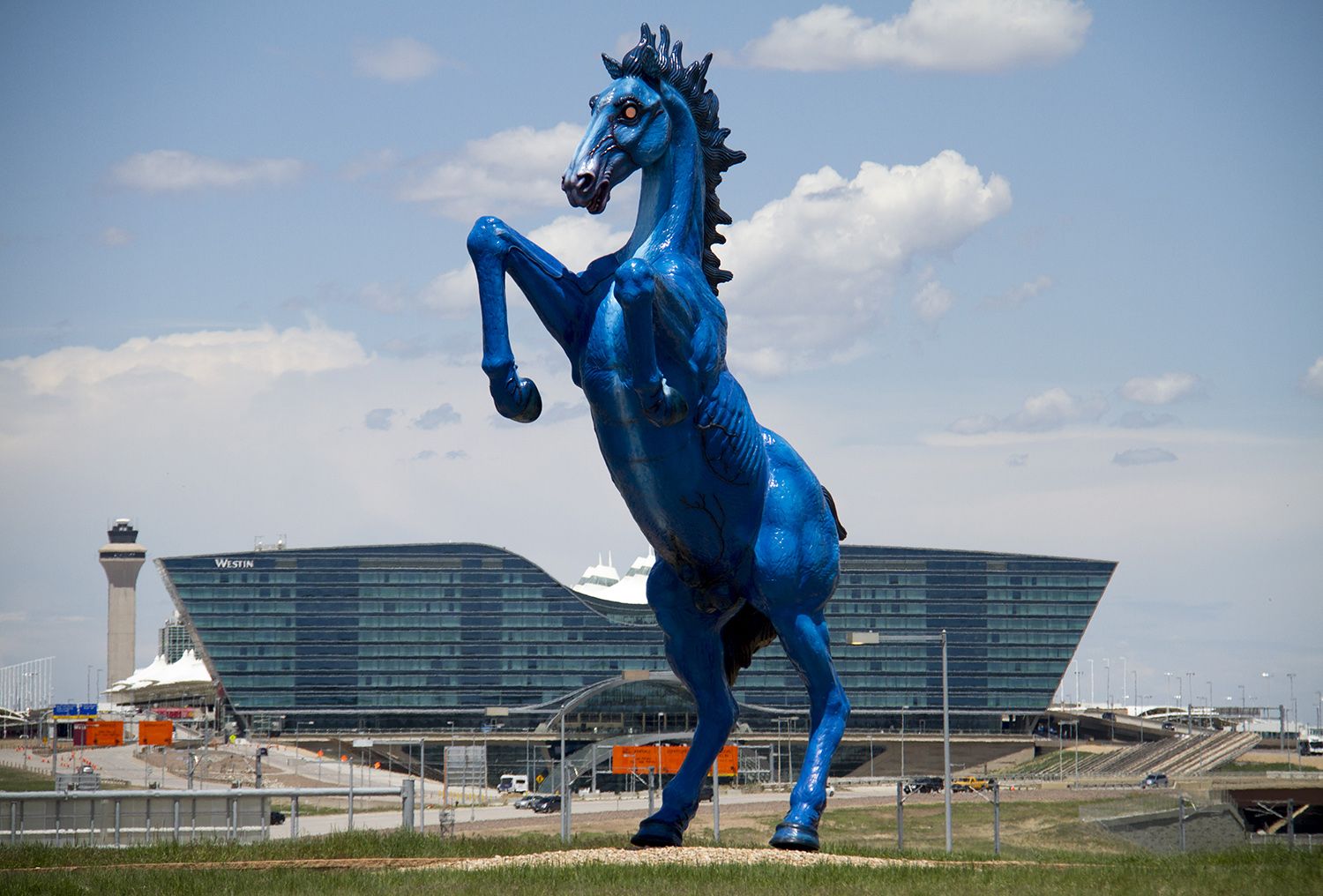 Blucifer outside Denver International Airport (not the pure-white, ever-virtuous Bucky the Bronco)

Bucky is one of many relics that were preserved from the old Mile High Stadium, and today it remains a symbol of power, strength, and speed. Old-timers and old-time Broncos fans know that Bucky is an irreplaceable piece of Denver folklore, but his hooves go far deeper into the fabric of American culture than you may realize. 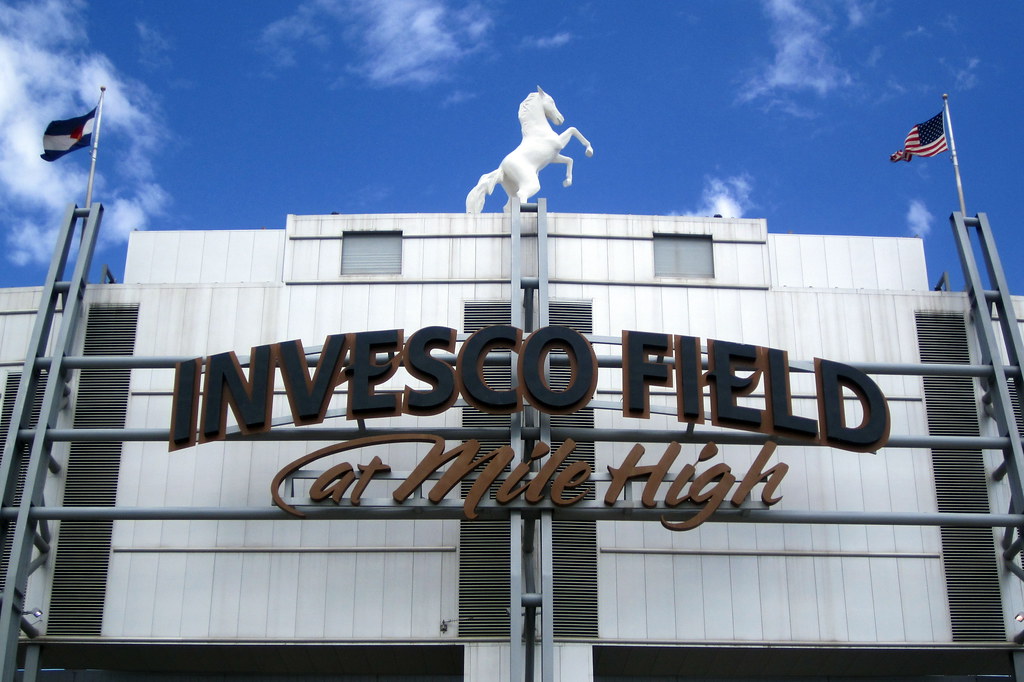 That's because Bucky is actually molded from a statue commemorating the real-life horse "Trigger"—a palomino (fun fact: "Mr. Ed" was also a palomino) ridden by none other than the "King of the Cowboys"—actor, singer, and musician Roy Rogers. 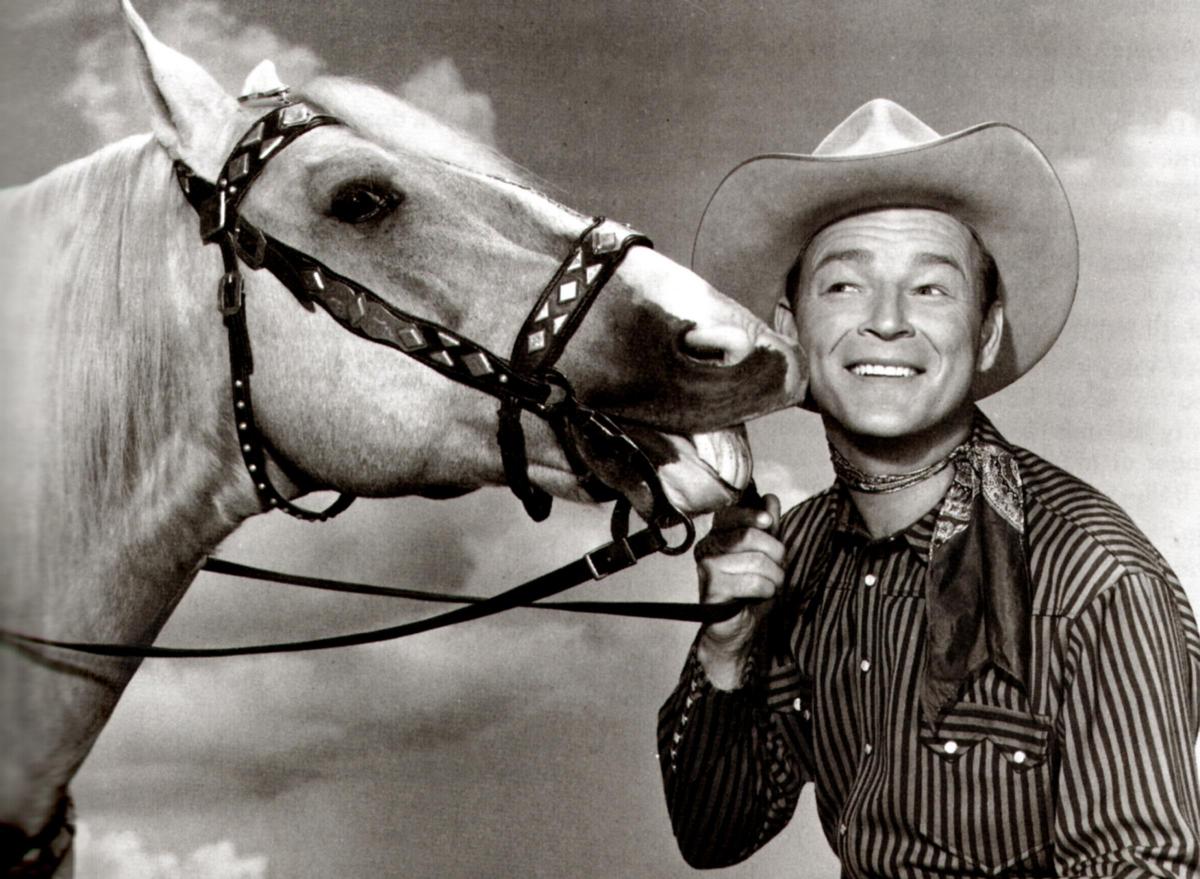 Roy Rogers and Trigger, courtesy of the Herald

It'll take some searching on YouTube and a tolerance for black and white film to see what the '50s star was all about, but for what it's worth, it had an impact on a young Willie Nelson, as his famous Martin N-20 guitar "Trigger" is also named after the iconic horse.

Rogers was also part of the famous country and western group "Sons of the Pioneers," whom you can thank for the beautiful harmony backing Sam Elliot's introduction of "The Dude" in The Big Lebowski.

And like Willie Nelson to his guitar, Roy Rogers often cited his horse Trigger as critical to his success in TV/film, so when Trigger passed away in 1965, Rogers arranged for his body to be taxidermied/preserved where it was then put on display at the Roy Rogers and Dale Evans Museum in Branson, Missouri (then, after 40 years, he was sold to a Nebraska TV station for $266,000). 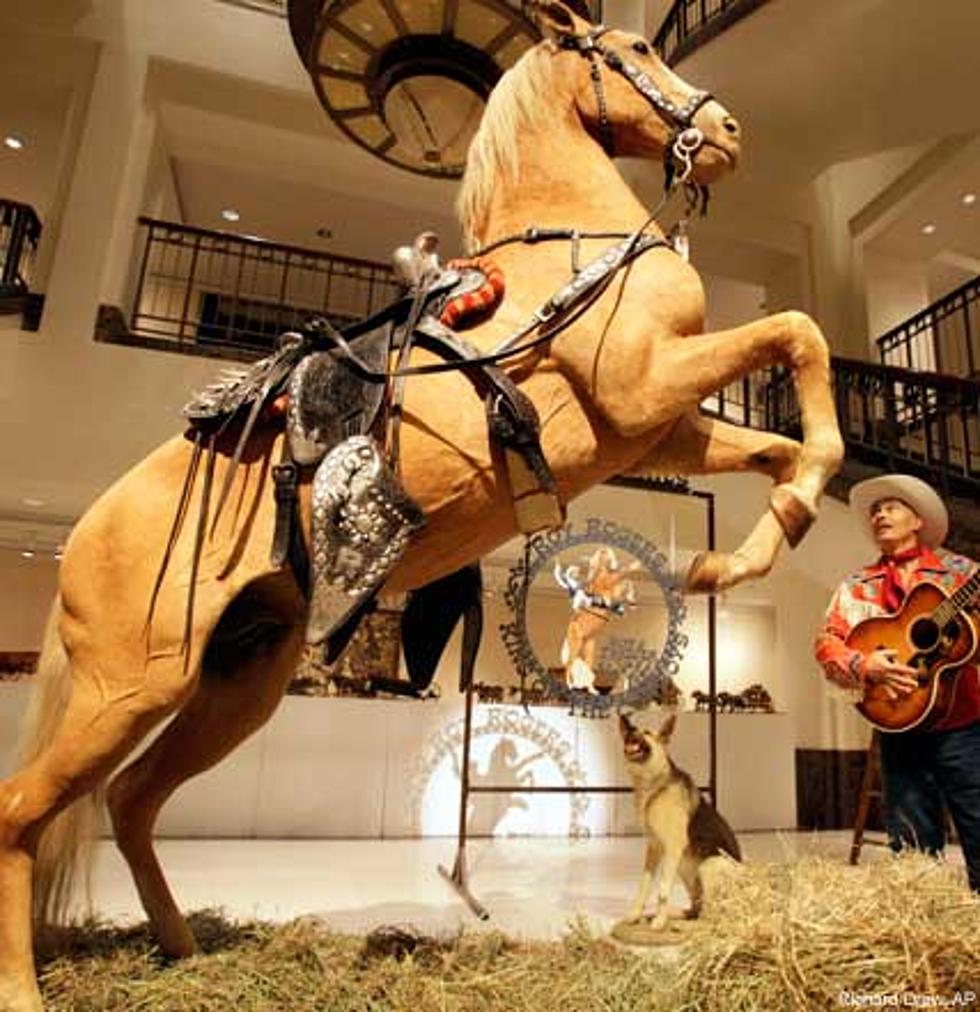 Trigger in taxidermied form, courtesy of The Boot

At the same time, Rogers commissioned the construction of a 24-foot fiberglass replica to serve as a landmark for the museum. 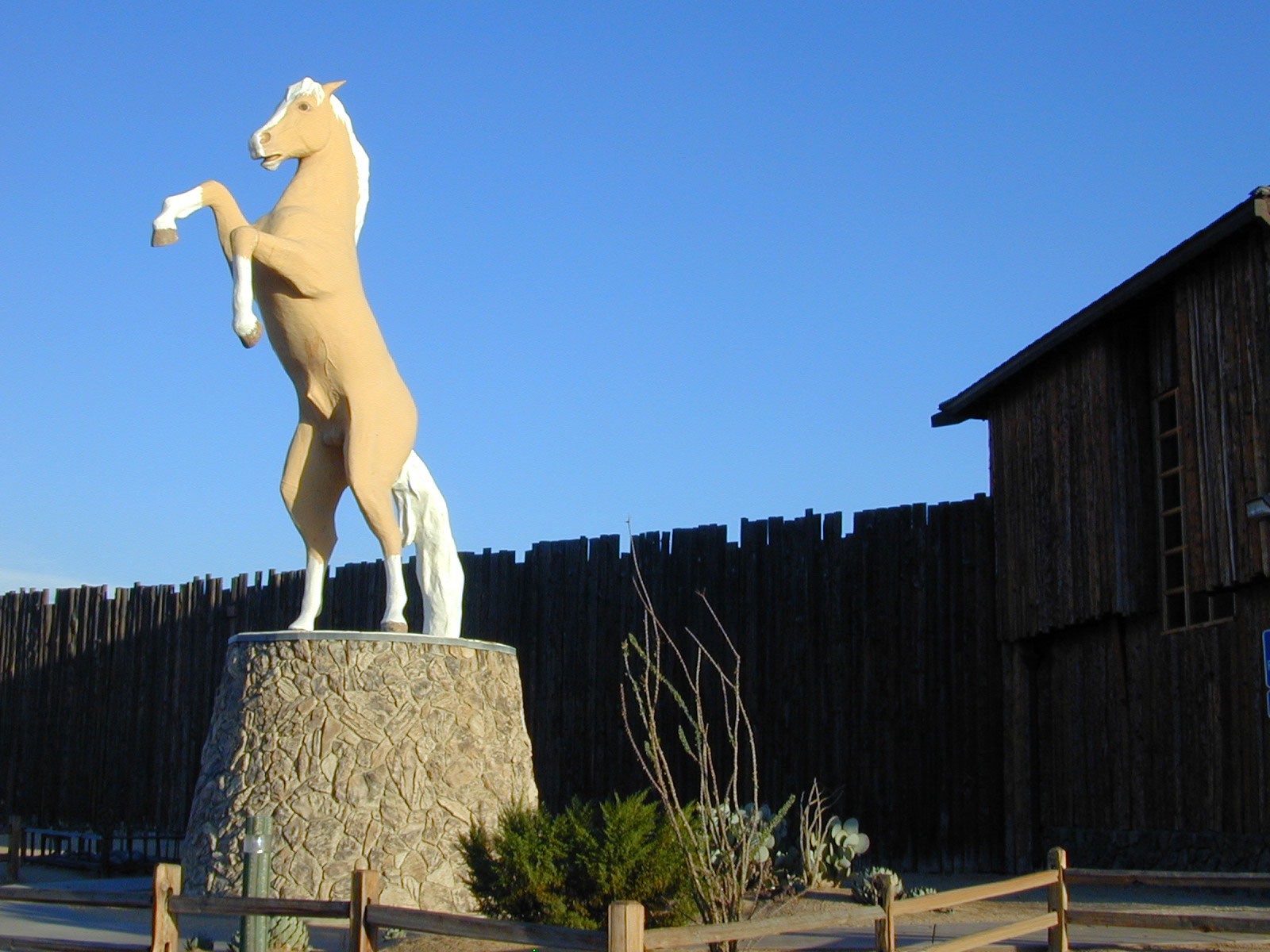 Outside the Roy Rogers and Dale Evans Museum, courtesy of medium.com

The then-owners of the Denver Broncos, Gerald and Alan Phipps, approached Rogers asking him if another statue could be made for the struggling football team. Rogers allowed it, and Trigger's twin "Bucky the Bronco" was born. After that, the mold was destroyed, making Bucky the iconic horse's only twin in existence. 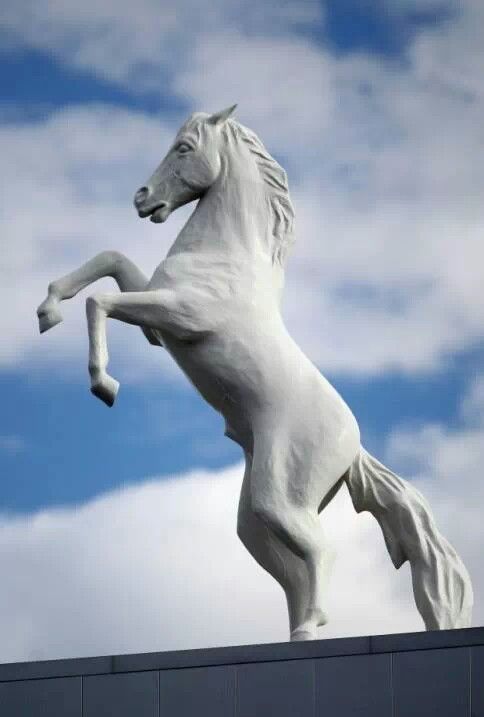 As for the name "Bucky," some believe that he's named after long-time Broncos punter Bucky Gilts, but even back then, punters didn't receive much glory, so sadly that's not true. Instead, the name comes from "bucking Bronco."

So, what do you think of Bucky's history? Will you look at him differently from now on? Share your thoughts in the comments! And go Broncos!