OCN Interview: We Sit Down With Dave Marvin, the Director of the Broncos Stampede

OCN Interview: We Sit Down With Dave Marvin, the Director of the Broncos Stampede

Ever seen the Broncos' drumline and brass band on game days? We interviewed the director of the Broncos Stampede.

Marching bands always give me goosebumps. Maybe it was the way I was raised, but the steady rhythm of the drums combined with the warm sound of the brass goes hand-in-hand with chilly autumn nights, team spirit, and—well, football. For me, marching bands equal happiness.

That's why, over the summer, I made an appeal to Broncos fans everywhere to learn our little-known "Broncos Fight Song"! (And if the Broncos ever needed to fight, it's now! Amiright?) Shortly after we published our article (within hours, actually), Dave Marvin emailed us, letting us know that he and his son Taylor were the ones the Broncos had commissioned to write the lyrics to the fight song as we know them today:

“Here come the mighty Denver Broncos
We feel the thunder from inside
Because the spirit of the West,
Will always be the best,
Let’s shout with all our pride …
Go Broncos!

Hail to the mighty Denver Broncos
Our team will rise a Mile High
We salute the Orange and Blue
We’re fans until the day we die.”

Marvin has been the director of the Denver Broncos Stampede (the Broncos' very own marching band) since its inception 15 years ago. And he was kind enough to let us ask him some questions! 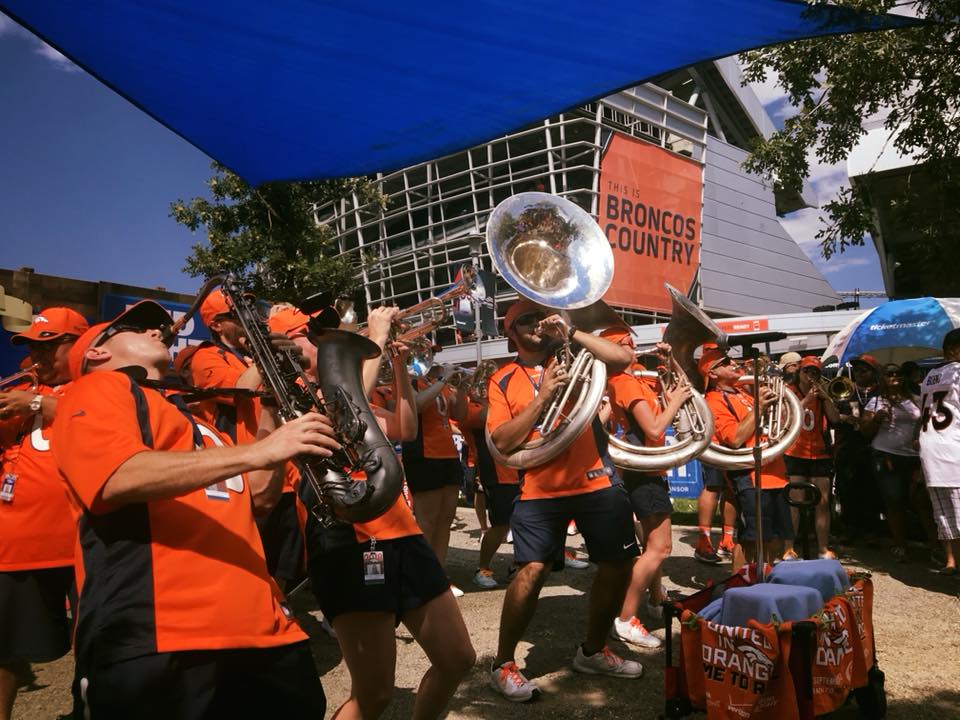 OCN: Can you offer a brief history of the Denver Broncos Stampede?

DM: The Broncos Stampede Drumline launched in 2003, becoming the first NFL drumline to enhance the fans' game-day experience. We added the horn line (the Broncos Brass) in 2009.

OCN: How did you get started in the Broncos Stampede?

DM: After the success of the movie Drumline, the Denver Broncos contacted Mark Arnold, Executive Director of the Blue Knight Drum and Bugle Corps, wondering if we could produce something similar. I've been involved with the Blue Knights since 1970, and Mark asked if I could create the group. I, of course, said, "ABSOLUTELY!"

OCN: So what's your current role with the Broncos Stampede?

DM: I have been the director from the start. I manage the talent, run rehearsals, and arrange the music for the group.

OCN: What instrument do you play?

DM: I am a lifelong musician, playing percussion instruments, guitar, and banjo! 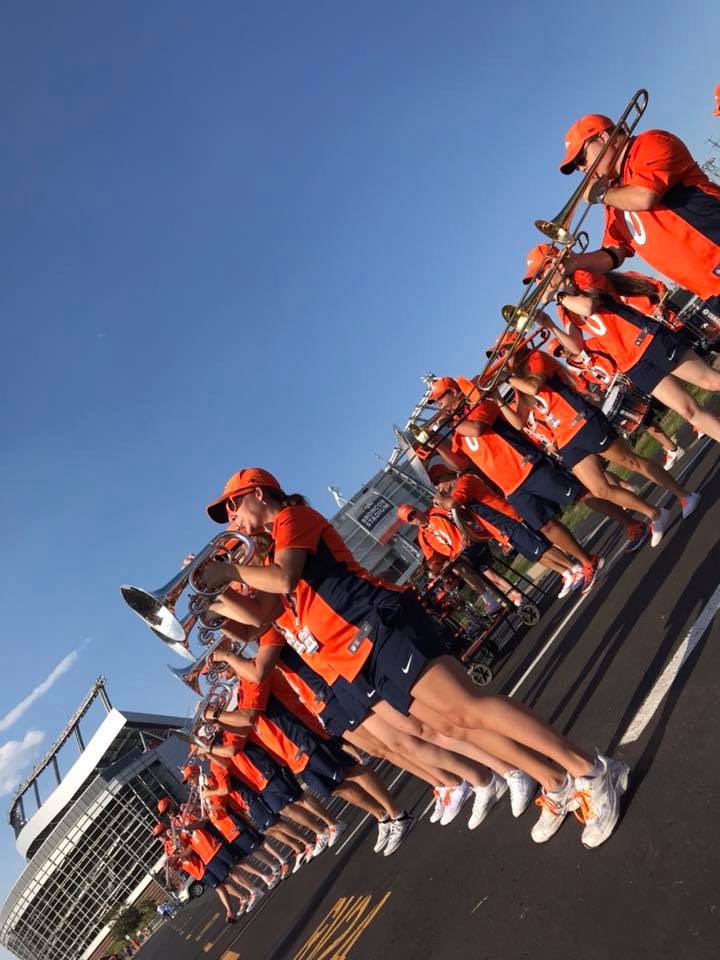 OCN: How many members are in the Stampede, and what range of instruments are included?

DM: There are 17 members in the drumline; 24 in the horn line. We use marching snares, tenors (quads), pitched bass drums, cymbals, trumpets, mellophones, trombones, sousaphones, drumset, a sax player, and a guitarist!

OCN: What's the process to become a member?

DM: As you can imagine, this is a popular gig for musicians! Not many spots open up each season. We don't re-audition every season, similar to a symphony. Most members have been associated with the Blue Knights Drum and Bugle Corps, or have marched in some corps or college marching band. Percussion applicants submit performance videos, and horn players do a live reading session with the group in late spring. Members have to be excellent musicians, strong players, be able to learn music quickly, and be high-energy performers. We do have a wide range of professions in our group, though. Of course, we have music teachers and professional musicians, but we also have business owners, engineers, a lawyer, a speech therapist, recording engineers, and yes, even a rocket scientist!

(For membership information, potential members can check out AscendPerformingArts.org.) 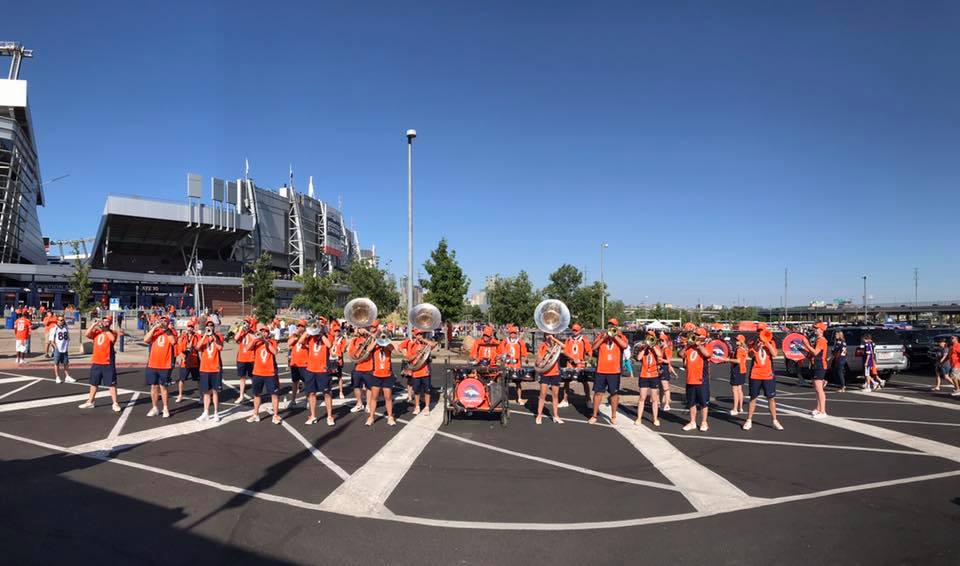 OCN: What does a typical game day look like for you?

DM: We arrive 3 to 4 hours before game time, to warm up and rehearse. Then we head out to the parking lots to entertain at tailgate parties and gate entrances. Then we head back in and gear up for our pregame performance with the cheerleaders on the field. This is where we play the fight song, the cheerleaders do their routine to it, fans sing along with the lyrics posted on the jumbotron, and we get the crowd pumped up by adding to the excitement when the team comes on the field.

OCN: What kinds of events do you play in addition to Broncos games?

DM: We do all types of corporate events and conventions year-round, not only at Broncos Stadium but statewide.

OCN: How long has the fight song music itself been used?

DM: We reintroduced the Broncos Fight Song music with the addition of our horn line in 2009. I was asked by a "super fan" if there were lyrics to sing along with when we played, so I approached Broncos Game Day Entertainment to see if this would be possible. When we researched and found the original lyrics, they were extremely dated. That was the beginning of the process to update the lyrics. The Broncos asked if I could rewrite the lyrics, so I went to work creating a modern version. I collaborated with my son, Taylor, (who is a Berklee graduate, clever lyricist, and the Stampede's guitarist,) and we researched many other fight songs, both collegiate and NFL. We wanted to keep the spirit of the original, but add themes from our state and community of fans. It was important to use iconic symbols and imagery relative to the West and the Denver Broncos -- something the fans could relate to and take pride in.

We used the word "Thunder," relating to the Broncos' horse mascot that runs out our game day ball and runs up the field at every score. Also, it refers to the "Rocky Mountain Thunder" -- the roar created by the fans stomping their feet, resonating through the stadium.

Other examples of iconic symbols and imagery that we chose to use are "The spirit of the west," "Pride," "Mile High," "Orange and Blue," and "Fans."

OCN: Do you (or any other members) have any memorable moments at the Broncos games that you would like to share?

DM: Every season-opening game is full of excitement and nerves. But certainly one of the most memorable moments was winning the AFC West championship game prior to Super Bowl 50! It was an exciting game, and we played on the field after the win with confetti showering down on us. Broncos football players jammed on the drums with us, and we took a group picture with John Elway! 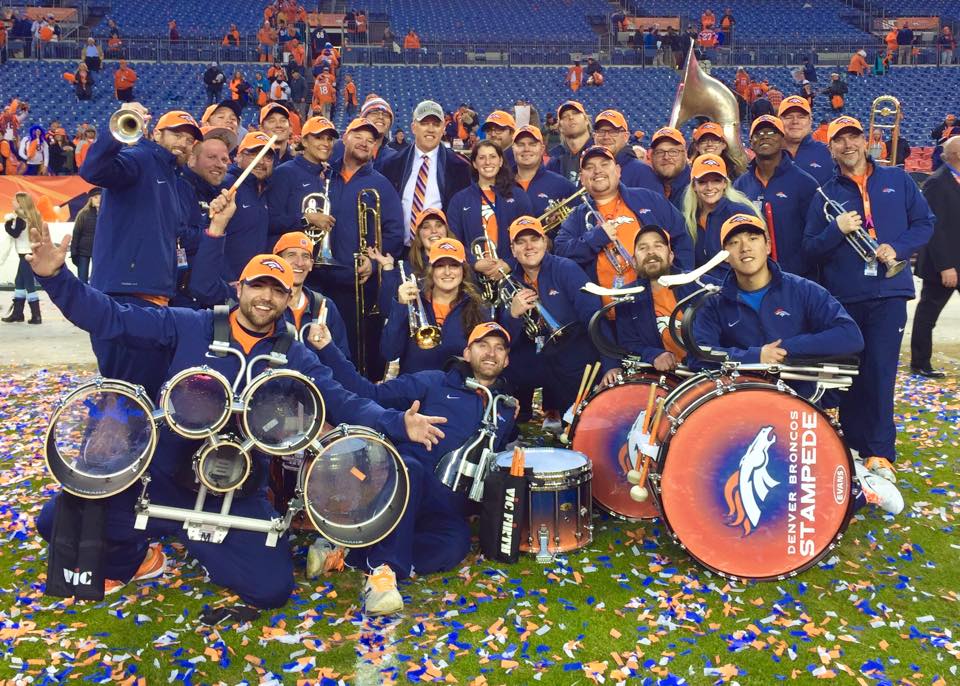 OCN: Did you get to go to the Super Bowl and perform?

OCN: Who's your favorite Broncos player—past, present, or both?

DM: John Elway, Peyton Manning, and Von Miller. The leadership of these three men helps define the team and the entire Broncos organization we are a part of.

OCN: Is there anything else you would like to add?

DM: I am extremely fortunate to work with the Broncos organization and their partnership with Ascend Performing Arts.

OCN: The Denver Broncos Stampede and Blue Knights Drum and Bugle Corps are only two of the groups produced by Ascend Performing Arts. They have a strong community commitment including not only the Stampede, but youth outreach with Denver Public Schools and other educational opportunities for young musicians throughout Colorado.

Have you heard the Broncos Fight Song? Watch the Denver Broncos Stampede perform it in the video below.

Big thanks to Dave Marvin and the entire Denver Broncos Stampede for everything you do for Broncos Country!

The Broncos need our team spirit more than ever! Do you know all the words to the Broncos Fight Song? Tell us in the comments below!

Here's WHY having a fight song is so important. Read all about it (and hear other teams' songs) here!